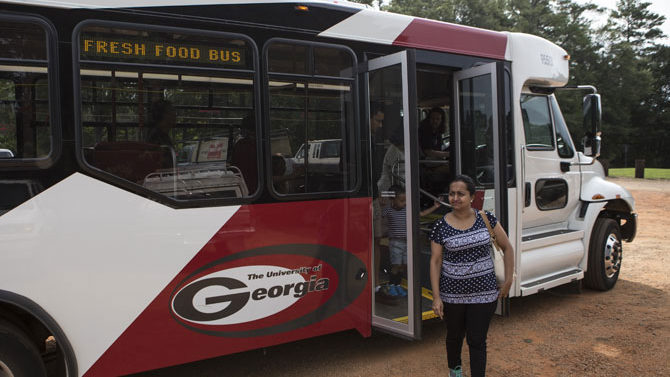 On Aug. 16, the first day of Sunday service, 2,428 people rode the bus, Athens Transit Director Butch McDuffie says. The second week, the number dipped to 1,695. But McDuffie notes that during the first weeks of operation, the service is pulling numbers higher than the target of 1,400 riders—the same as Saturday’s typical ridership.

The first four weeks of the service—through Sept. 6—are free as part of a promotion to expose the public to the program. Sunday service was budgeted at $239,000, but the free promotion won’t cost the city, since the service began six weeks after the fiscal year started. Athens Transit began the Sunday bus in conjunction with fall service changes instead of the planned date of July 5, so the savings are being used to fund the promotion and marketing.

After the promotion ends, McDuffie thinks ridership will decline, but he says transit staff has noticed several regular riders taking advantage of the Sunday bus, and he expects that to continue, keeping the numbers high enough to continue the service. “They were very thankful we were providing buses on Sunday, because they ride the bus all the time,” he says. “So, if there isn’t Sunday service, you’ve got to walk or find another way on Sunday, or just don’t go.”

That is what several riders told Flagpole on a recent Sunday: They either had to pay friends to take them to work or to run errands, or they couldn’t go anywhere. “[The Sunday bus] makes it much easier to go to work,” says Krystal Wilson, a regular rider who works in food service. “I would normally have to get someone to take me to work. If not, I have to call out.”

Although several people were riding the Sunday bus to shop or go to work, some were simply trying out the free service. Cynthia Watkins rode the bus with her four young children, having just taken them out to play after hearing about the free promotion.

Sunday service is not certain to stay around. The service was not put in the budget with permanent funding, but rather as a pilot program. Athens Transit will continue to monitor the ridership, McDuffie says, and city elected officials will determine next year whether or not to continue the program.

“We have to use our taxpayer-provided dollars as efficiently as possible,” McDuffie says. “So, if we have a service out there that is not providing a high-level ridership, we have to rethink that. That’s not just Sunday, that’s any service that we provide.”

To help keep ridership numbers high, the group Athens for Everyone helped organize a few promotions, including discounts at several local restaurants if customers bring a bus transfer pass. Tim Denson, the president of the group, says the promotion is also an attempt to destigmatize riding the bus by targeting members of the community who are not as likely to use the bus.

“One of the issues that surrounds the transit system is that there is a stigma about what public transit is. People think that it is dirty, dangerous, only for poor people or people that don’t have cars,” Denson says. “No matter who you are, no matter what class you are, the bus can really work for you.”

Denson is optimistic about the success of the Sunday bus, adding that the service is helping to drive the economy, since people without cars can now go to restaurants or shopping on Sunday.

At least one Sunday rider agreed with that sentiment. Jimmy Haynes, a cook, says before the service began, Sunday was “a dead day,” because he could not do any shopping. “It opens up a whole other day,” Haynes says. “It is the best idea they’ve ever come up with.”

Like Sunday service, the new “Fresh Food Bus,” which takes riders from the UGA campus to the Athens Farmers Market, is also a pilot program, says Kevin Kirsche, the director of the university’s Office of Sustainability, which is supporting the program. UGA Transit is providing the service, sponsored by Wholesome Wave Georgia, a nonprofit that aims to make locally grown food more affordable and accessible.

Farmers market manager Jan Kozak, who had the idea for the bus, does not have exact numbers on ridership, but says the buses have been full.

One goal of the bus service is to increase participation in the program that doubles SNAP benefits (the Supplemental Nutrition Assistance Program, often known as food stamps) when used at the market. Kozak says during the first weekends of the bus service, use of the Wholesome Wave program rose by 50 percent. But “the final verdict is still out on how successful it is going to be in that regard,” he says.

Dana Carney, a UGA freshman, says taking the fresh food bus is a good way to get fresh fruit, since she does not have a car. Connie Hauser, also a freshman at UGA, echoes that sentiment, explaining that she and friends rode the Fresh Food Bus because they do not have cars on campus.

Another freshman, Caitlin Bellora, says going to the farmers market is now easier than going to the store to buy groceries. “I still haven’t gotten to Walmart or Target, because I don’t have transportation,” she says.