As UGA Grows, So Do Neighborhood Parking Woes 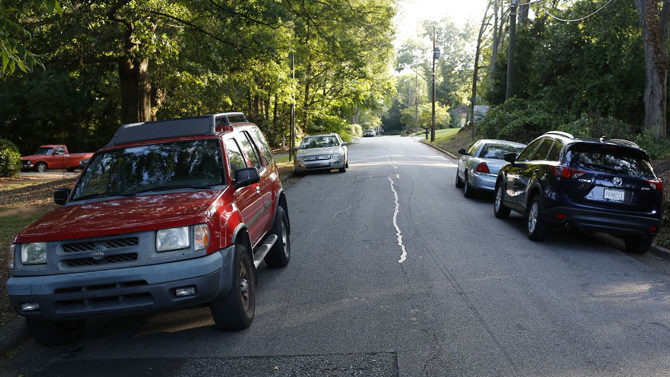 You can’t park on the street in some parts of Athens unless you live there. Or you know someone who lives there. And you pay.

When the Athens-Clarke County government restricted parking on Five Points streets beginning with Morton Avenue, University Drive and Hampton Court around the year 2000, the purpose was to keep students from using on-street parking as a free alternative to university lots that require expensive permits. Over the years, 15 more streets—all of them in Five Points—have been added to the list of places that allow only residents and their guests to park on the street, and only if they have a special government-issued permit.

That could change around the Health Sciences Campus in Normaltown, where residents got the option last fall to petition the government to add their area to the list of places that require permits to park on the street.

“Parking has always been a conflict” in neighborhoods that abut the University of Georgia, says Commissioner Jared Bailey, who represents the south side of Prince Avenue adjacent to the HSC. “There’s plenty of parking on the campus, but for some reason, some students don’t park there.”

Normaltown neighborhoods have grown congested with traffic since the Navy vacated its 56-acre campus at the intersection of Prince and Oglethorpe avenues and the University of Georgia took it over. The county commission made three of the streets there eligible for parking restrictions a year ago, and earlier this month limited parking along Georgia Avenue (the short street that runs between Normal Bar and Athens Regional Medical Center).

Streets are fuller. Whether students are creating the parking congestion, and why, isn’t as clear.

Some neighbors swear they’ve watched students park on Satula and Yonah avenues, cross Prince Avenue and walk onto campus. Others point to the restaurants and bars that have cropped up in recent years, and the loss of parking on a vacant lot where the landmark bar Allen’s used to stand but a medical office building is planned now. (The medical office will have a parking deck, but it will only be open to patients.)

“It is clear that there are people on [the north] side of the street dashing across Prince Avenue,” said Commissioner Melissa Link, who wants county traffic engineers to study whether an additional crosswalk and bus stop would help. While Bailey represents the neighborhoods on the same side of Prince Avenue as the HSC, Link’s district is across the busy road.

The HSC has plenty of parking spots, but the university parking system doesn’t exactly discourage students from parking off campus. Students can buy either a permit to park on the main campus or on the Health Sciences Campus; there is no special pass available for those who have classes on both campuses. Permits for the main campus are $20, $30 or $40 a month (depending on the demand for the lot) and require a nine- or 12-month commitment.

The HSC offers a similar deal for a permit good only at the Prince Avenue campus. Students who don’t want to pay $20 a month over a nine- or 12-month contract can pay $1 an hour to park.

Students and faculty with classes on both campuses can also take advantage of the free UGA bus that runs between the two every 20 minutes. Two city bus lines also run past the HSC.

There’s no way to know how many students are parking nearby and walking onto the Health Sciences Campus. The Georgia Regents University/University of Georgia Medical Partnership started training future doctors there in 2012. Most of those students have all their classes on the Prince Avenue campus. UGA’s College of Public Health is the largest part of the HSC, though. The college has four academic departments, three institutes and one academic center, all of which eventually will be located at the HSC. Students in public health programs are more likely to have classes on both the main and health campuses.

And the HSC also operates a dorm for 140 undergrads (not freshmen) and a workout facility that’s less crowded than some other gyms in town. Both are available to any student, not just those in health sciences.

Rebecca Ayer, the public relations coordinator for the College of Public Health, suspects some students come to the HSC for the same reason many other people come to Normaltown: food. Ayer has seen students queue up outside the dining hall on campus, sometimes waiting a half-hour to get through the line.

Since the campus opened, the university has already expanded seating in the dining hall—Scott Hall, which Food Services dubbed “The Niche”—to accommodate more students. The eatery brags about its made-to-order food, cozy bistro atmosphere, tasty gelato and open-fire grill. The Niche is available to any student.

“I don’t think anyone expected Scott Hall to be as popular as it seems to be,” Ayer says. “We get so many people walking onto the campus here around lunchtime. It’s really surprising.”

In September 2014, the Athens-Clarke Commission added three streets in Normaltown to the list of places that could pursue mandatory parking permits if they want. (Three streets in Pulaski Heights are on the list, too, though congestion there likely isn’t caused by students going to class, but rather people looking to avoid paying for parking downtown.) Even when a street is eligible, two-thirds of the neighbors have to agree to limit on-street parking to residents who agree to pay $10 a year for a permit. Visitors to those streets can get a one-day pass with a resident’s help.

Jennifer Lewis leaves that option open if parking gets even more precious. But after 15 years in their house on Georgia Avenue, she’s happy to have the problem. “We’re getting hit with both the expansion of Normaltown business and the Health Sciences Campus. It’s a good thing for us,” says Lewis. Painting yellow curbs on alternating sections of Georgia Avenue solved her concern—for now, she says.

Limiting parking in other areas may push more students, as well as restaurant and bar patrons, to park farther and farther into neighborhoods, she says. “Right now, do I want to go to the trouble of paying $10 a year just to park in front of my own house? No,” Lewis says. “But if the situation changes, I’d be open to the idea.”

In the Buena Vista neighborhood across Prince Avenue, some residents are also grumbling about clogged streets and blocked intersections.

To an extent, residents in neighborhoods on both sides of Prince Avenue say they don’t mind parked cars, which slow traffic. But some are wistful for the insulated Navy School, which stayed contained to its campus.

“Regardless of what was going on at the Navy School, there was never—I mean never—a parking issue,” Greg Yoder said at a July 7 meeting when commissioners discussed yellow-curbing Georgia Avenue. The university shouldn’t expect the Athens community to provide free parking for students when UGA received the Navy School property for free, he said.

As UGA grows, the problem could expand to other neighborhoods. While no Eastside streets are currently part of the parking permit program, UGA’s new veterinary teaching hospital on College Station Road is causing similar problems for residents there.