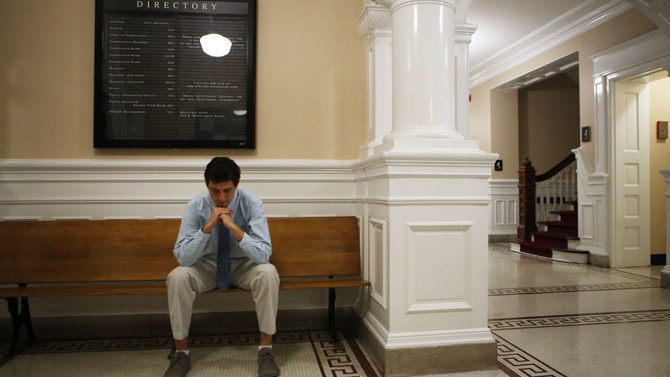 Josh Wayne is not your stereotypical stoner. He’s a psychology major with good grades and ambition—he started the group Athens CARE almost immediately after arriving on campus as a freshman. You’re more likely to catch him in a button-down than a Bob Marley T-shirt.

After going to a club fair and realizing a marijuana group did not exist, Wayne started a local chapter of the Campaign for Access, Reform and Education (CARE) to lobby for medical marijuana and to decriminalize or legalize it for everyone.

Four states have legalized marijuana for recreational use, others have decriminalized it, and a small group of mostly young people are working toward those goals in Athens. It’s an issue that’s growing in importance among young voters. Vice magazine told President Obama recently that it was the No. 1 thing readers wanted to ask about; the president said he sympathized but chided them for not putting other issues first.

Why has marijuana become an issue on par with alcohol during prohibition? Wayne says he is passionate about marijuana partly because he thinks the laws are unjust. “I just think from a personal liberty standpoint, people shouldn’t be arrested for partaking in something that doesn’t inhibit anybody else’s free will,” he says.

Young people’s interest in the subject is about rebellion, too. “If you tell somebody not to do something, they are more likely to actually do that thing,” Wayne says.

HOPE Scholarship recipients could potentially lose thousands of dollars if caught, but Wayne says many still see the benefits of smoking as outweighing the risks. One of the reasons is self-medication: They believe weed can treat their illnesses better than anything a doctor could give them, and soon some of those people will be able to ingest cannabis oil legally, once the Georgia medical marijuana bill is signed and enacted. Wayne himself uses marijuana to curb his irritable bowel syndrome, an illness not included in the medical marijuana bill.

People also see it as a safer alternative to alcohol, Wayne says. “Zero people have ever died from an overdose on marijuana, but weekly we see somebody die from alcohol,” he says.

However, Wayne says he and the group know that there are health risks, but those risks are made worse by opposition groups putting out false information about marijuana. “When kids realize that information is not true, they tend to have the opposite opinion which is that it is harmless,” he says.

Although young people may make up the majority of marijuana reform advocates, older generations are joining the fight as well.

Stefka Bolton looks at the garden at her home, noting her horehound and St. John’s Wort plants, which are commonly used to treat several medical conditions, much like marijuana, Bolton says. “Cannabis is just a plant,” she says. The way the government treats marijuana, Bolton says, should be similar to the way it treats alcohol; legal, but with restrictions so people are more likely to use it safely.

Between her mother-in-law’s struggle with Parkinson’s Disease, her sister’s stomach cancer and her own arthritis, Bolton has seen many doctors in Georgia and says they have been accepting about the idea of using cannabis oil, even before the bill passed the state legislature last month.

“Doctors in Georgia, they will not mention it first, but if you ask them about using cannabis, they are all about it,” she says. The side-effects of her medication for arthritis can be much more harmful than marijuana, Bolton says, and that’s why she became an activist for legalization.

Several members of Athens CARE attended the Mar. 3 and Apr. 7 Mayor and Commission meetings to speak in favor of a “parallel ordinance,” a local law that police and courts could use instead of harsher state law to lighten the punishment for people caught with marijuana. One of them was University of Georgia student Polina Yakovleva, who recounted a story of a friend who tried marijuana for the first time with a friend who brought 7 grams into her car.

Possession of less than one ounce of marijuana is a misdemeanor in Georgia punishable by up to one year in prison. But first-time offenders are eligible for pretrial diversion, where the punishment is generally a year of supervision similar to probation, a $300 fine and 40 hours of community service, says Clarke County Solicitor C.R. Chisholm. After they complete the program, offenders’ records are expunged, he says.

Students are just one group that’s affected by drug laws, Athens-Clarke County Commissioner Melissa Link says, and they may be over-represented in Athens because it is a college town. Young people are also seem to care less about the stigma of supporting marijuana, and that is part of why fewer adults openly push for legalization.

“I think there are a lot of adults probably that would support it, but they won’t be vocal about it, because there is such a stigma,” Link says.

Decriminalization could also help lower-income minorities, Link says. “Most people who go to jail for these things are poor and black,” she says.

According to an American Civil Liberties Union report, African Americans are almost four times as likely to be arrested for marijuana compared to whites, even though members of both races use it at roughly the same rate. That could be because police pay more attention to African Americans, or because they’re less likely to be able to afford a lawyer. Either way, it leads to a “domino effect of misery,” as arrestees often lose their jobs, Link says.

Several commissioners—including Link, Jerry NeSmith and Andy Herod—are sympathetic to Athens CARE’s views and want to at least explore the possibility of decriminalization. But ACC’s attorney, Bill Berryman, says it may not be possible. “If the state preempts an area, local governments can’t act to change what the state has regulated,” he says.â€‹

But some are looking into ways to get around this. A UGA graduate student, Brett Johns, is working to write an ordinance with language that will not conflict with Georgia’s laws. One option may be to write the ordinance in a way that says possession is a civil penalty and leave the charge up to the prosecutors’ discretion once the person charged goes to court, Johns says. “I think it is morally wrong that we send so many people to prison for what really is a harmless matter,” Johns says.

According to University of Georgia police data, reports of drug possession have risen between 2006–2014, but fewer arrests were made. It’s unclear how many drug offenses involved marijuana specifically.

The Athens-Clarke County Police Department still pursues users of marijuana just as much as any other drug, Assistant Chief Fred Stephens says, despite the increasing public opinion shift in favor of legalizing or decriminalizing marijuana.

A majority of Americans favored marijuana legalization in 2013—the same year that Colorado and Washington legalized the drug—for the first time in history, according to a Gallup poll. It is a monumental change from when Gallup first asked the question in 1969, when only 12 percent favored legalization.

Legalization advocates believe violent crime—like the UGA student who was shot and killed during a drug deal earlier this year—will fall if pot can be openly purchased. Stephens, though, believes people will still burglarize or rob people for money to buy legal marijuana. “There is still that piece of the puzzle that is still not solved by legalizing the drug,” he says.

But Melissa Link says legalizing or decriminalizing marijuana would lessen its value and thus the motivation to steal it or the money to buy the drug. “When you make something illegal, you don’t regulate it, so there is the opportunity for violence and crime to arise around it,” she says. “All these other states that have decriminalized, they’ve shown that their crime rates plummeted.”

Decriminalization is not a complete fix, Wayne says, but it  would be a good start in saving state money and reducing the prison population.

“Currently, our prisons are over-flooded, and we have passed a bill for $80 million for prison expansion, and decriminalization would go towards keeping nonviolent offenders out of prison so we can save money that way,” Wayne says.

A bill allowing the use of cannabis oil for treatment of a few illnesses was passed by the Georgia General Assembly last month. Gov. Nathan Deal has said he will sign the bill and has already issued an executive order telling state agencies to begin preparing for the law to take effect. Cannabis oil—a cannabis extract that lacks THC and so cannot get people high—will be used to treat seizure disorders as well as cancer, Parkinson’s disease, multiple sclerosis, Crohn’s disease, Lou Gehrig’s disease, mitochondrial disease and sickle cell disease.

“For someone who has a late-stage terminal illness or who has cancer, they are going to be able to get that psychotropic effect that lets them keep their appetite up or overcome their nausea,” says Sen. Curt Thompson (D-Tucker), an advocate for medical marijuana and legalization.

The big problem, Thompson says, is that growing marijuana or producing cannabis oil is not allowed in Georgia, so people with approved illnesses will not be able go to a pharmacy to get cannabis oil. In fact, they cannot get it in Georgia. “If you want to get something standardized where you know the strength of it, and you’re not buying it from a college student like you do when you buy recreationally, you’ll have to go over state lines,” he says.

The bill does create a study commission to research ways to produce cannabis oil in the state, Thompson says, but that is still years away. Wayne says it is promising that Rep. Allen Peake (R-Macon), who sponsored the bill, asked for in-state growing, and although that did not happen, Wayne is glad that progress will be made to lead to it.