Pet Pounds: Just Like People, Dogs and Cats Get Obese 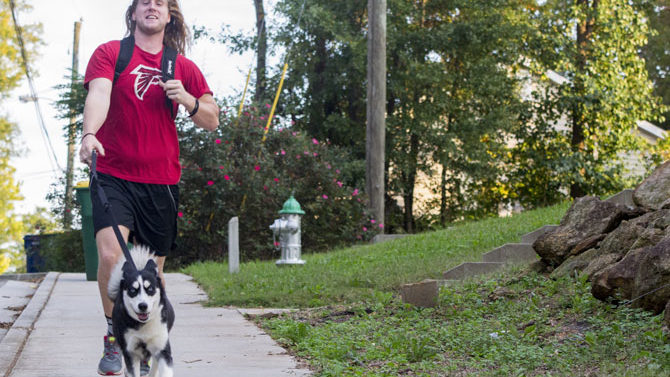 Veterinarians and animal researchers are seeing an alarming number of overweight pets and are advising owners to take extra steps to keep their pets healthy, Meanwhile, a new group of specialists in Athens is becoming concerned about obesity and unhealthy numbers on the scale.

“The trend we’ve been seeing is that as people develop more obesity, pets are, too,” says Cindi Ward, chief medical officer of the University of Georgia’s Small Animal Hospital. “Pets mimic our activity levels, because they live the lives we live.”

As veterinary faculty and students who work in UGA’s Community Practice Clinic see more cases of obesity, they’re also seeing more of the illnesses that go along with it, such as diabetes, heart disease and thyroid problems. More pets are dying from obesity-related diseases and living with symptoms of labored breathing, joint pain and decreased energy levels, too. “Most pets are overweight now, and they’re getting sick because of it,” says Ward, an endocrinologist who studies diabetes in cats.

Is your pet overweight? It’s easy to tell, says Janet Martin, a veterinarian at the Athens Area Humane Society. Veterinarians developed a body condition score, usually on a 1–5 or 1–9 scale, that marks whether your pet is emaciated, obese or at a healthy weight. To hit the perfect score in the middle, pets should have a visible waistline, both when looking from above and from the side. From above, you should see a waistline between your pet’s ribs and hips, and from the side, the chest should be the lowest part of the body that slopes up toward the back legs at an angle.

“People sometimes take it personally when you say their animal is a little overweight,” Martin says. “But you’re the one feeding them. You should accept the responsibility of deciding what and how much they eat, as you would for your child.”

The first step is nutrition, she says. You don’t have to buy the most expensive dog or cat food, but it needs to be a good quality brand. Then give your pet the right amount by checking recommendations based on size, age and activity levels. Many owners overfeed their pets by overestimating their pets’ activity levels or simply not measuring the food, Martin says.

“When we ask how much owners feed their pets, they’ll say one cup in the morning and one cup in the evening,” she says. “But when we ask about the size of the cup, we realize it’s huge. Use a scoop with a measuring cup and be consistent with that.”

Owners also tend to give too many treats or snacks with high calories, she adds. Pay attention to the nutritional content of treats, even if you need to check online for the calorie information. Many times, the snacks contain more calories than a full meal.

“The part that gets us are those sad eyes. It makes us happy to make our pets happy,” Martin says. “But you wouldn’t give your kid a candy bar each time he asked for one. For animals, many of these treats are just like candy bars or ice cream.”

Pet owners can also reverse the overweight trend through exercise, Ward says. If you have a dog, the best first step is to take your pup for a walk each day. Even if you have a yard for your dog to go outside, structured exercise time is important to ensure your animal gets enough movement. Swimming, hiking, camping and agility sports also get them active. “Taking your dog for a walk forces you to get out and exercise as well,” she says. “Plus, it’s a great way to bond with your dog.”

Although it’s not as easy to walk a cat, owners should keep structured play time in mind for them as well. Use lasers, mechanical mice, small balls and string to encourage your cats to run, chase and pounce. As long as the physical activity keeps their heart rate up and works their muscles for a sustained period of time, cats will receive the same benefits, Ward says. “When it comes to our animals, food and exercise are key,” she says. “We’re really in control of how they live.”

Two years ago, Ward and UGA kinesiology professor Ellen Evans teamed up to teach a class about obesity in both humans and pets. Students were shocked to learn the numbers and put more effort into exercising their animals—and themselves. This year, Ward is teaching a class about the role of cats in society, and she includes talks about nutrition, physical activity and disease. In addition, UGA’s veterinary school recently hosted a workshop focused on agility sports and how to get your dog started.

“Agility sports are a great way to get your dogs to exercise and also spend time with them,” Ward says. “Plus, you get a workout as you teach them to run through the apparatus.”

And when the pounds start coming off your pet, you’ll see a difference. “When they lose weight, so many pets feel so much better and more energetic,” Ward says. “If people thought about this part more, they’d realize how bad it is and do more about it.”