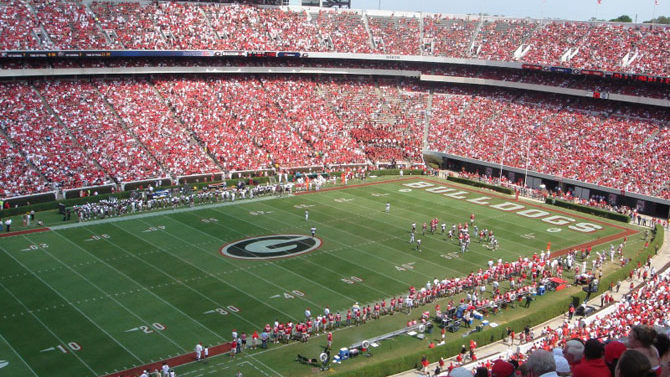 Prior to the kickoff of last year’s football season, the UGA Athletic Association revamped its student ticket distribution policy. The system, now based on the number of completed UGA hours (transfer credits don’t apply), guarantees that seniors, juniors and sophomores get the entire home season package and their first choice in away-game tickets, too. Sounds fair, right? Allow seniority—and dollars paid to UGA—to dictate preferential order.

The problem is that graduate students who also attended UGA for undergrad lose those 120-something completed hours in this system; essentially, they go back to freshman status. Understandably, the Double Dawgs, as these students are dubbed, were pretty upset last year. They think it’s a bit unfair that their four years of time and money given to UGA are completely disregarded, considering they’ve pledged another few years by beginning grad school. Many assumed the policy would be amended for this year’s season, but it has not been altered.

Tim Cearley, associate athletic director for ticket operations, says that “the rule was implemented by students on the ticket committee, with the reasoning that a UGA student returning for a fifth year who has had four years of opportunity to attend football games should not take precedent over undergrads.” Cearley also clarifies that “grad students may qualify, but only after eligible undergraduates’ requests have been fulfilled.”

When asked why the rule wasn’t changed for this season after the backlash last year, Cearley replies that “proposals on any revisions to this policy are under review by students, but would not take effect if at all until 2015 at the earliest.”

Though a year has passed since the policy was implemented, students who were upset last year are still upset, just perhaps less vocally. Second-year law student Frances Kim says the policy “has been a source of unhappiness” for returning students, because going to the games is a big part of school culture and the institution itself. Kim also notes that she had no trouble getting a full home season package last year and doesn’t have time to travel for away games, and as a result she didn’t feel personally affected by the policy much.

“However,” Kim continues, “a lot of my peers… were upset by it, particularly because some of the away games, like the Clemson game last year, are some of the biggest ones in our season. After giving so much time and money to the school system, I know a lot of them said it felt like a slap in the face.” She sympathizes with the students who highly value the ability to go to away and postseason games who are disadvantaged by the policy, students like J.B. Lee, a first-year law student returning to UGA.

“I never missed a home football game in my four years as an undergrad,” Lee says. “I don’t understand the school’s logic that now, just because I am a graduate student, I have to start from the bottom of the totem pole again.” Lee also points out that fifth- and sixth-year undergraduates take precedence over him in the current system, which is an odd outcome of the policy. “It seems like a clear double standard about who the university values,” says Lee.

Even grad students who went elsewhere for their bachelor’s degree think the policy seems to undervalue Double Dawgs. Leah Hixon, a 22-year-old who recently graduated from the University of South Alabama and is just beginning vet school at UGA, says that grad students who attended undergrad here shouldn’t be considered freshmen again.

“If I had gone to UGA for undergrad, I would personally be insulted, since I would be paying UGA for eight years of school,” says Hixon. “You would think that would mean something.” She speculates that students attending professional school here will likely be big donors one day, and it seems unwise to upset them by undervaluing their commitment to the school.

Lee echoes Hixon’s sentiment. “I love this school and chose to remain here for law school. Instead of rewarding me for being loyal to the school and to the football program, I feel as if I have been pushed aside.”