How to Keep Fido from Freezing 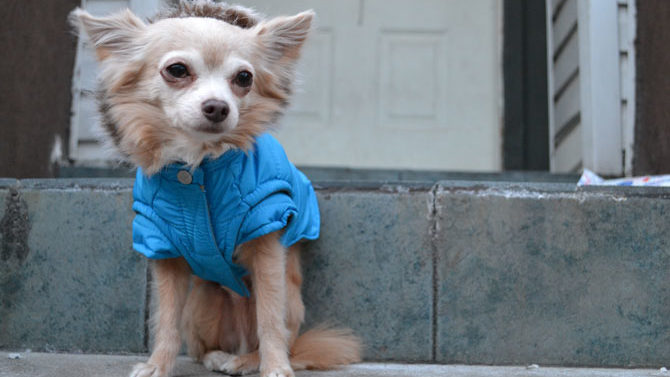 It is a phenomenon that happens around the country daily. It even happens in Athens. In fact, it’s probably happening right now. It is tiny-dog-in-a-sweater outrage.

Possible forms of this outrage include: pure anger that the tiny dog’s owner has spent actual money on an actual sweater for a prissy-ass, basically-cat, breeder-purchased dog (general); adding “when there are starving people in the world” to the end (humanitarian); and asking oneself, “Wow, that dog’s sweater has fewer holes than the one I’m wearing; what kind of piece of shit am I?” (personal).

As it turns out, there is often an actual need for that tiny dog to be wearing that tiny sweater, ridiculous though it may seem. Other types of pets—large dogs, cats and horses—can require clothing as well, depending on breed and circumstance.

Dogs at higher risk for developing complications to the cold include small breeds, like Chihuahuas, Yorkies and miniature pinschers, as well as larger breeds with short hair (like pit bulls, greyhounds and Rottweilers), elderly dogs and puppies. Even adult, healthy breeds with long coats that better withstand colder temps have exposed skin on their noses, around their ears and on their paws that, in a harsh cold snap, “can freeze quickly and suffer permanent damage,” according to humanesociety.org.

Realistically, the chances of a Georgia cold snap severe enough to freeze your dog’s nose during your morning walk are slim, but that doesn’t mean it couldn’t happen. In most cases, during the colder months, walks and any other outside time for your pets should be kept to a minimum.

Athens-Clarke County Animal Control Superintendent Patrick Rives notes that the easiest way to protect your pet during the winter is to keep your pet with you. This seems like glaringly obvious advice, but as PETA’s website points out, domestic animals die from cold-related injury and disease every year. UK Metro reported a story in December on a stray border collie in Canada who had lost his back paws and part of his tail when they froze to the ground. He would have died had he not been adopted and given new prosthetic legs.

Here in Athens, Animal Control does receive more calls during the cold from citizens concerned about neighbors’ animals left outsid, says Rives. “We don’t see a lot of actual injuries and other health issues we could specifically connect to cold-weather exposure, as those are difficult to differentiate from other neglect-related issues,” Rives adds.

Jennifer Howard, a veterinarian at Boulevard Animal Hospital, says the clinic doesn’t see too many pets with cold-related injury or disease, compared to other places in Georgia where she’s worked. “The dogs most at risk are outdoor dogs living in a yard or on chains, who don’t have a place to take shelter from the cold or wind,” Howard says. Then when it gets cold on top of that, these animals can run into problems with upper respiratory infections, pneumonia and hypothermia-induced organ failure, which can be fatal.

If it isn’t possible for an animal to be inside—“and it rarely is not possible,” says Rives—“make sure outdoor pets have a warm, dry, comfortable place to get away from wind, rain and snow. The igloo-type shelters with flaps on the front with some sort of bedding inside are pretty good.” Its size should be kept to a minimum (big enough for the dog to sit and lie down comfortably) because smaller spaces trap heat better, according to the Humane Society website.

The dogs at the local Athens shelter are kept out of the elements, too. “Our kennel runs are indoor/outdoor. We have a heater on the inside area, and we place dogs more sensitive to cold closer to the heater and ones who tolerate cold better farther away,” says Rives. “We also have blankets and raised dog beds on the inside. Also, there is a door between the inside and outside part of each kennel that we keep closed on empty kennels—our favorite kind—and on cold nights we bring all the dogs inside and close those as well.”

Another issue for an outside dog during cold weather is water. Rives notes that owners easily forget that their pets’ water bowl can freeze, so be sure to check it routinely. Try using plastic rather than metal in the winter, because a dog’s tongue can freeze and stick to a metal bowl. Ouch!

We all know Athens hosts quite an impressive community of stray kitties, too. An easy way to help these guys out is by banging the hood of your car before you start it in the morning—cats and other small animals may crawl up there to steal heat from the engine. You could also get together with neighbors or friends to construct a shelter for stray cats; there are instructions on the Humane Society’s website.

Salt can get stuck between your pets’ paw pads and irritate the foot, so be sure to wipe them down after walking around a salted area. Also beware of toxic antifreeze spills, as its sweet taste attracts animals.

So, even though you might hate the idea of clothing for animals, it’s in their best interest, sometimes. Just don’t let yourself be outdressed by a Yorkie; that’s on you, friend.