Half-Athed: How I Survived the AthHalf Half Marathon 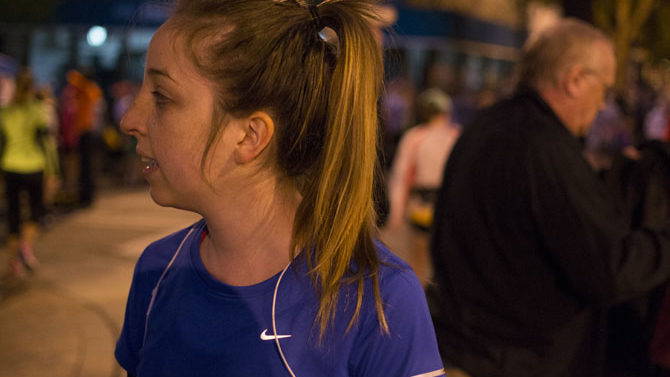 Well, it’s finally over. I have trained for and completed my first half marathon. What a long, often grueling and occasionally rewarding 10 weeks.

The exciting news is that I finished way faster than I predicted—two hours and 26 minutes, to be exact—and I actually enjoyed the race, which I only “half” expected to. I anticipated my finish time being about three hours, considering that my longest run of 9.17 miles took me about two hours and fifteen minutes, but that race-day adrenaline is no joke.

Now that it’s over, let me tell you a little bit about what’s happened since my article was published [Oct. 15] and explain how race day went down. The last couple weeks of training were really rough, and I’m not exaggerating. I think I was running maybe twice a week. There were days where I just didn’t feel like running, so I didn’t; I was sick of it and ready for this to be over. A couple times when I did run, I had some really bad performances that made me nervous for the big race. I felt resigned to whatever fate that day would hold.

At the Expo the day before the race, I got a little panicky. I overheard people talking about times they wanted to beat, and everyone just seemed to have it together, when I so clearly did not. I had planned to do all of these things to prepare (advanced things, like drinking water), but didn’t do any of them and just stayed in bed all day watching “Twin Peaks.” I was also really nervous about what to wear, because I knew the morning was going to be cold, and I don’t have drawers full of all-weather running gear. So after asking some employees and receiving mostly vague, minimally helpful advice, I decided on a dry-fit short-sleeve shirt. I also bought some running sleeves and a new iPhone armband, too, so my anxiety translated to my spending $60 in last-minute preparation. It was worth it, though—I was very pleased with my outfit during the race.

When I drove into town the morning of the AthFest half marathon, my first thought was, “I can’t believe that this many people willingly signed up to do this.” It was packed. Fairly soon after, the reason started to reveal itself. The atmosphere was electric: Everyone was jittery with excitement, warming up with running buddies next to their corrals, and “Super Bass” was playing. Just being there was fun. Although I definitely would not have woken up for that if I wasn’t running. No way. So early. You people are crazy.

Here’s a sampling of my thoughts during the race:

“It’s amazing to me that people can think about this as an actual race. For me, it’s a lot more like a test of how much I hate myself.”

“Such cute children and dogs. Thanks for standing here to watch me run. It really helps. And yes I will gladly touch your poster for more power. Thanks for the power.”

“I really nailed the outfit. Good job me.”

“Why so much spitting?”

“Wow, it’s been seven miles, and I haven’t walked yet. Maybe I can do this whole thing without walking! YEAH!!”

“Definitely wanna beat this girl with the super flashy leggings.”

“How does anyone ever run more than a half marathon? I do not understand.”

“Man my legs are so heavy. New goal, try not to trip over self.”

Yeah, no deep thoughts or anything during the race. In other exciting news, I ran about eight and a half miles before I walked at all, and I’m really proud of myself for that. This happened mostly because I was scared that if I stopped I wouldn’t be able to start again.

The last three miles were truly hell. HELL. I was in a lot of pain by that point. The playlist my boyfriend helped me make the night before was key during this time, because I was picturing myself dancing at Little Kings to escape my aching legs. But I ran the whole last mile, and the final bit being around Sanford Stadium was really special. Got to be on the Jumbotron, no biggie.

I was bedridden the rest of the day. So much pain. I feel like there’s no way this amount of pain is normal, but I’m afraid to look it up.

All in all, the race was a good experience, and I am definitely considering doing it again in the future when I have a bit more time to dedicate to training. I really Half-Athed it there at the end. I feel it was a sentimental and empowering way to round out my time in Athens, and when I move to NYC this month, I will definitely remember with fondness running around this beautiful city. Thanks everyone who supported me on the race day and throughout the process, and thanks for letting me tell you about it.

Now, nobody talk to me about running for at least a year.