Live Your Own Movie at New Bottleworks Business 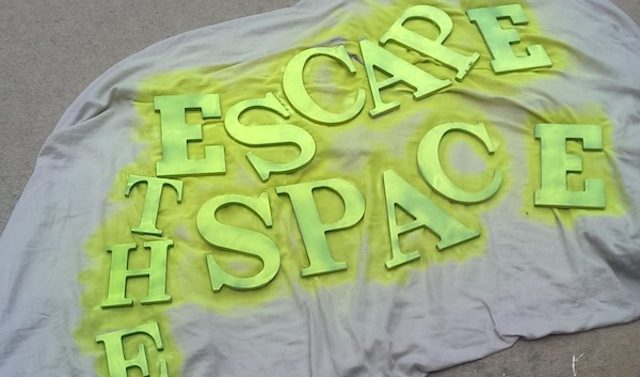 Imagine opening your eyes to find yourself locked in a room with seven other people. You are told by a computerized voice you have 60 minutes to escape, and everything you need to get out can be found in the room.

Sounds like the plot of a B movie, right? It’s actually something you can sign up to do right here in Athens with friends, co-workers, exes, strangers—anyone you would like to be stuck in a room with for an hour, really—at Bottleworks’ newest attraction, Escape the Space.

Andrew and Alicia Brasher, the husband-and-wife duo behind the escape game, were vacationing at Disney World in August and were looking for something to do on their last day. Alicia found an escape room online and convinced Andrew to do it, without telling him what it was. “It was a weird, weird, weird experience, but also one of the most fun things I’d ever done,” says Andrew.

When they returned from their trip, the couple began joking about how much Athens would love something like that. The time between their decision to go for it and the initial soft opening was a mere four weeks.

If you’re still confused about what Escape the Space is, that’s normal. Even Andrew and Alicia admit it’s a tough concept to explain. Personally, I was expecting to be in total darkness in the room, and apparently I wasn’t the only one to think that. (Although the Halloween-themed room, Quarantine, promises to play with lights more than the current room does.) One girl even showed up with sneakers, ready to run, Andrew and Alicia remember with a laugh.

So let me break it down: You and your team are led into a room, blindfolded. The reason that you are locked in a room is explained. Blindfolds come off. You have 60 minutes to tear the room apart looking for clues.

In the current room, there are four puzzles, and the number of clues needed to solve each puzzle is given. The clues and the puzzles they are intended for are color-coded. After you solve all four puzzles, the last all-important clue is revealed, enabling you to escape. The puzzles’ level of difficulty varies, and Andrew and Alicia pull from different knowledge bases, using math, word, music, history and spatial games to create the puzzles, so “every person that comes into the room has something to offer,” says Alicia.

Yes, the couple designs the puzzles, the themes, everything. That was the longest and most difficult part of the process, too, they say. The puzzles changed quite a bit through the course of the setup, as Andrew and Alicia would poke holes in each others’ ideas, or find a new item they wanted to use as a clue.

The room, by the way, is decorated with exclusively Athenian objects, from local folks, thrift stores and even some cherished pieces from the Brasher’s home, like Andrew’s iCade (a device that turns an iPad into an arcade game, complete with joystick). He claims not to cringe when it gets thrown around, though, and trust me, it does.

“After the blindfolds come off,” says Alicia, “there’s about 15-30 seconds of looking around at each other, like ‘OK, what do we do?’ At first, everyone is neat and orderly, until they realize that part of the point is tearing the room apart. That’s when it really gets fun.” After 20 minutes, my group still missed about 50 percent of the clues. It’s amazing how much we had to be coaxed to really destroy the room, especially knowing that Andrew and Alicia have to put every little clue back in its place, but they voice no complaints.

Moving forward, there will be two differently themed rooms set up simultaneously, and each room will operate for two months. One room holds 6–8 people, and the other 10–12, although the couple is busy devising ways to accommodate larger groups. Individual tickets can be purchased as well. At the end of the room’s run, they plan to host a Loser’s Week where tickets are half price, teams have half the time, and they can pick up where they left off. I’ll be seeing you guys there.

Quarantine, the newest room, which wasn’t open yet when I visited, is supposedly a bit “Walking Dead”-like, incorporating zombies and the CDC. Andrew, a movie buff, loves sci-fi, so the rooms’ themes lean that way. “It has to be a crazy story for the answer to be, ‘I’m locked in a room,’” Alicia points out.

Each room is set up a bit like a movie scene, and it’s actually like the couple is telling a story with space, rather than words or pictures. “You’re the story. You’re not watching it happen; you’re making it happen,” Alicia says.