Grading the Graders: How Do UGA Professors Rate Rate My Professor? 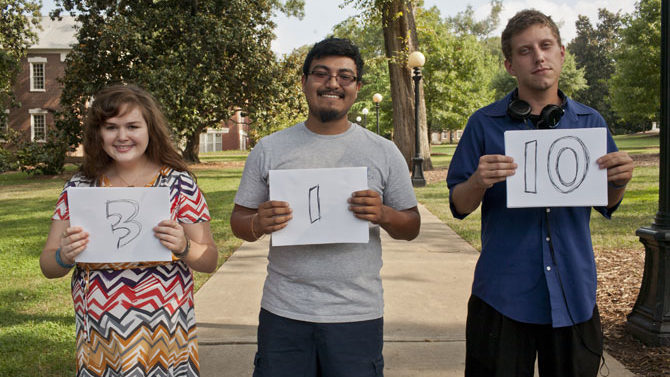 Most of the time, students are led to believe that their fate lies at the hand of their instructor, and most of the time, that’s true. Almost everyone remembers one abominably cruel teacher who refused to bump a grade .1 percent to a C… I mean, an A. However, faculty often utilize student feedback in evaluating promotions, raises, etc., turning the tables and putting the professors at the mercy of their students for a change.

Not all students feel like being merciful. Websites like Rate My Professor and Koofers allow students to leave anonymous comments, and not surprisingly, many of them use the opportunity to let go of all their pent-up frustrations from the course. One instructor, Daniel Gilhooly, says he was “shocked at how scathing some of the reviews were.”

Rate My Professor is an older website with a fairly terrible interface and many outdated comments—I don’t think I’ve come across one more recent than 2011—where professors are rated for overall quality, easiness, clarity and helpfulness. Koofers is much newer, and in addition to comments about a professor, students can also access grade distributions, class structure, old notes and past tests. Koofers has a greater number of reviews, many of which are average, rather than falling into the raging/glowing dichotomy of Rate My Professor. In short, it’s a more reliable site.

The University of Georgia conducts end-of-semester evaluations that prompt students with questions like, “Was the professor always prepared for class?” and “Did this course challenge you to think and learn?” which provides solid, comprehensive feedback, especially since some courses and departments require each student to fill one out. The problem is, though, that students don’t have access to these or any other university-conducted class reviews, so the outside websites are the only source of information available to students.

Marie Mitchell, an associate professor in the management department, encouraged her son, who is getting ready for college, to look at Rate My Professor to check out his options. When he looked up his mother on the site, he informed her, “Mom, they hate you!” Mitchell says while laughing.

The six unfavorable reviews for Mitchell hail from a Friday class that was mandatory for majors. “I could have sat there and done a tap dance, and it wouldn’t have mattered,” says Mitchell. Many of the reviews cite the class itself as the problem and don’t blame Mitchell. “The class is no longer in existence, so that should tell you something,” she adds.

“It’s always challenging to teach a class with 300–500 students in a room, because it’s hard to reach everyone,” Mitchell says. “And in those particular classes, I just have to know that the students who do well are not going to go on Rate My Professor and say, ‘She’s great!’” Meanwhile, she notes that “you’re going to get students who aren’t doing incredibly well in class who use [the site] as a sounding board to vent, but hey, that’s their right.”

That semester, she taught multiple sections of the course, about 1,300 students, and only six left comments. “That’s not a representative sample,” she says, but she believes her end-of-semester student evaluations are, and consequently she puts more stock in those.

As a parent, though, Mitchell thinks the websites have value, especially since students don’t have access to those conducted by the university.

Jeffrey Howells, a lecturer in the management information systems department and fellow recipient of poor reviews, doesn’t quite agree that those university student evaluations are valuable. “The issue about students trying to evaluate what’s going on, is they don’t yet have enough information to know whether [the professor] is good or not,” Howells says. He tells his students they won’t understand until two or three years into their career why certain things are important.

“That being said,” Howells adds, “If a professor really pisses a student off, that’s not good. No one’s trying to make it so miserable that they can’t stand it.”

Unlike Mitchell and Howells, horticulture professor David Knauft takes all his students’ feedback seriously. “There are a lot of things that go into being a good teacher or not, and certainly part of it is what students think about you,” says Knauft. He’ll even do a mid-semester evaluation with his students so he can adjust before the course ends.

At a different university, when he was teaching a mandatory introductory genetics class, Knauft conducted teaching research with four other professors—one with equally high, one with average and one with poor student evaluations. The professors used the same bank for test questions and compared the results. The conclusion was the students were learning the same amount of genetics from a “good” teacher and a “bad” teacher. “It surprised me, because I thought my students were going to do a whole lot better than [the poorly evaluated professor’s] students,” says Knauft.

As to why his students seem to like him so much, Knauft laughs and says he wishes he knew, but after some thought, he cites his multifaceted assignments and attempts to relate the course material to broader social issues as possibilities. “And, I like to listen,” he says.

On the note of listening, Gilhooly, now a professor, says he tries to create a safe space and open dialogue for his students. Both he and Knauft have a perfect 5.0 rating from their students.

In addition to the positive reviews, both Knauft and Gilhooly received chili peppers, which is the Rate My Professor’s official seal of attractiveness. Interesting to note, almost all of the positively reviewed professors have peppers, and almost none of the negatively rated ones do. “I’m sure it has nothing to do with physical attractiveness. Why would all the ugly faculty members do a bad job teaching?” asks Knauft, jokingly—but he still plans to show that to his wife. “Every schoolboy knows if he has a crush on his art teacher, he loves art,” Gilhooly offers as a possible explanation.

Though professors have various ideas about the usefulness of these websites, students seem to find them helpful. Dafna Kaufman, a senior at UGA, reads Rate My Professor every semester when she registers for classes. Being the daughter of a professor herself, she realizes that knowing about the professor can often prove more useful than knowing about or liking the class topic.

Marco Roca, a junior, says he always reads Rate My Professor when choosing classes, but he doesn’t believe the comments to be fully representative. “I know nearly everybody who comments on those sites is inherently motivated to write an exceptionally positive or negative review,” he says. “I take it with a major grain of salt.” While good reviews have encouraged him to take a class, he doesn’t let negative reviews deter him from registering for a course.

Though Kaufman ignores the melodramatic and overly rude comments, on occasion, a professor’s profile has caused her to avoid a class entirely. “There have been many classes that fit my schedule, but then when I read the Rate my Professor review, I decide I’d rather not take,” she says. “An unfair or disorganized professor can really ruin a great class topic.”

The bottom line is that a student is responsible for his or her own education. “The basic learning comes from the student,” Howells says. “All a teacher can do is facilitate the learning.”