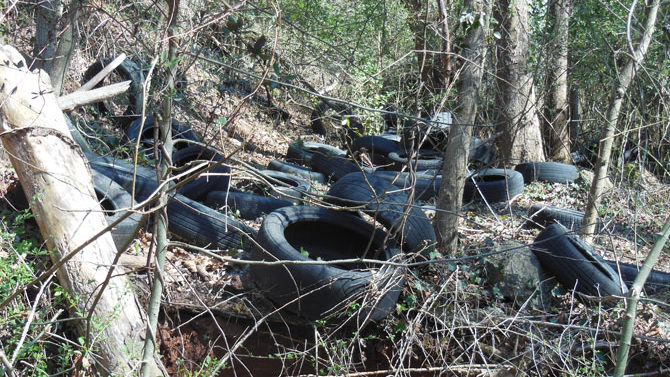 Paul Martin didn’t see the hidden closing costs when he purchased the shopping center anchored by the Omni Club on West Broad Steeet. A quick survey would reveal an illegal tire dump close to Briarcliff Creek. He soon realized that there’s little officials can do to enforce dumping bans—and the cost of disposing of tires properly is exorbitant and often falls on the property owner.

“I owned the thing for less than 60 days before I got cited,” Martin says. He’s already hauled away almost 100 tires, and the cost of disposing of tires at the ACC landfill is $3 per standard passenger or light truck tire, $10 per commercial truck tire and $15 per ton of bicycle tires and tubes, with a $5 minimum. That adds up.

Martin says that, based on the pile-up of tires, it appears someone has been using the property as a dumping ground for a long time, and he is surprised that no one noticed the tire dumping prior to his acquisition. “The Omni has been there for eight years, maybe nine, and nobody said anything to them at all,” he says.

(Martin, by the way, isn’t ready to talk about his plans for the shopping center. “We’ve got some ideas, but we’ve got to work those out with the present tenant,” he says. “There’s no telling what might happen.”)

In the early 1990s, the Georgia Department of Natural Resources created a program to clean up scrap tires and recycle about 12 million tires that were housed in illegal stockpiles around Georgia. Landfilling whole tires has been banned since 1994. Funding for the program comes from the one-dollar fee you are charged when you buy new tires for your car. It applies to the retail sale of all new tires, with no exemptions.

Still, there is little ACC or the state can do to stop people from illegally dumping tires, officials say. People “dumping tires illegally on people’s property” is a big problem without an answer right now, says John Mincemoyer of ACC Solid Waste. “We’re on an honor system, but people are dishonest, and they lie.” He says that he’s seen it all, even people trying to dump whole tires hidden in trash bags.

“It is somewhat hard to enforce, because you’ve got to prove it,” ACC Community Protection Division Administrator John Spagna says. When people dump tires illegally on someone’s property, and no one can point the finger to a known culprit, it becomes the responsibility of the property owner to clean up the mess up, Spagna says.

According to DNR, when scrap tires are recycled properly, about 62 percent of them are sold as tire-derived fuel to paper mills, about 25 percent are sold to building contractors for use in sewage system drainage fields and about 13 percent are sold as feedstock to out-of-state producers of crumb rubber.

Right now, Martin is trying to find out if the rest of the illegally dumped tires are on his property. “When you feel like someone is taking advantage of you, you sort of push back a little,” he says.

“We understand that [cleaning up tires] could be on the property owner,” Spagna said. “The other side of the argument is… you need to be in control of the property.”

When big tire-shop companies like Kauffman Tires or Tires Plus have a load of scrap tires, they’ll hire a company with the retail fee to transport the scrap tires. “It’s kind of like a middle man they’re paying to take the tires,” Spagna says. But “mom-and-pop stores” will often pay a “less reputable” scrap tire removal service, and those haulers will end up dumping on both public and private property—mostly public, he says.

Officials say they rely on citizens to report the illegal tire dumping when they see it, and ACC will first issue a warning to the property owner to clean it up. “If you don’t clean the property after we’ve asked you, then you get a citation,” Spagna says. They regulate the citations through an ACC unlawful dumping ordinance, rather than rely on the much broader state regulations.

If someone is caught red-handed in the act of dumping tires and the police become involved, they will call the ACC Community Protection Division, which will issue an “immediate citation.” But most people dumping tires illegally, use the cover of night, and it’s rare that the police get involved. “Tires don’t really have markers to know who physically dumped them,” Spagna says. “A lot of times, we come in after the fact.”

Spagna says that his department does try to work with property owners by teaching them how to block off their property at the weak points so vehicles can’t get back there. “But at the end of the day, somebody has to be held responsible,” he says.