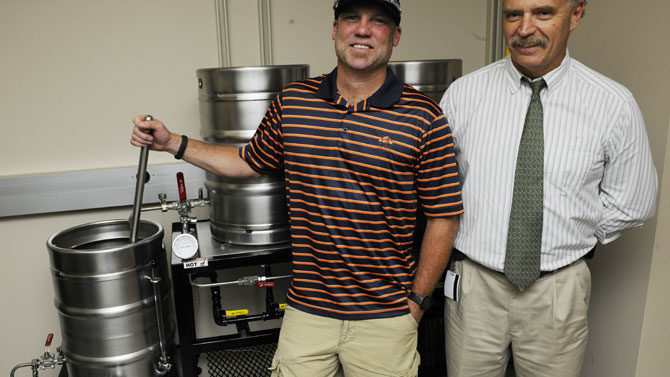 Auburn University students can now get a graduate-level brewing science and operations certificate, but even though Athens is a growing craft-brew hotspot, a similar program won’t make its way to the University of Georgia anytime soon.

Auburn’s program was created to fill a need in Alabama, the brewing industry and the region, says Martin O’Neill, head of the nutrition, dietetics and hospitality management department and program director for the brewing certificate. “When you have a look at the growth of craft brewing nationally, really I think you would describe it best as an explosion,” O’Neill says. “One would have thought that there would have been a corresponding increase in the number of programs available on the market. In actual fact, there were not.”

That explosion is happening in Athens—where craft breweries Creature Comforts and Southern Brewing Co. are set to join Terrapin Brewery and Copper Creek, not to mention a growing host of home-brewers—as well as across the country. Yet even though some universities offer brewing courses, Auburn’s brewing certificate will be one of just a handful in the nation, O’Neill says.

Despite high levels of interest, with around 300 serious applications to the program, the opening class will be limited to 10 or 20 students, O’Neill says. The program may grow, but the numbers will remain smaller to foster the quality of education. “This notion of putting [200] or 300 students in a class is not something we’re subscribing to,” he says. “I think what we’d be doing is defeating the purpose. I don’t think there is a need to be enrolling [200] or 300 students in this area.”

Auburn’s brewing science certificate launches in the fall 2014 semester, and students must complete a minimum of 18 credit hours. Courses offered cover the business of brewing, brewing materials, the science of brewing, facilities and operations, as well as a 120-hour practicum in a professional brewery. One industry partner with the program is Oskar Blues Brewery, based in Colorado and North Carolina. The brewery was founded by Dale Katechis, an Auburn alumnus.

Based on past success of a program with Blue Ridge Community College in North Carolina, the partnership with Auburn will offer benefits to both students and Oskar Blues, says Anne Fitten Glenn, whose title is “beer communicatrix” for Oskar Blues.  “We feel that beer education is giving people a leg up in this great industry,” she says.

Out of the 12 graduates from BRCC who entered the brewing industry, six were hired to work at Oskar Blues. Fitten Glenn says she hopes the program will allow students hands-on industry experience as well as bring new employees to Oskar Blues.

“I think that like any industry that’s becoming, you know, going from kind of a grassroots industry to becoming a little more sophisticated and a little more complex in terms of manufacturing, that having actual education just gives people a leg up,” she says. “We’ve certainly hired people who haven’t been through beer education programs, but we’re looking more into people whose passion takes them in that direction.”

Terrapin co-owner and brewmaster Brian “Spike” Buckowski says the Oskar Blues practicum should offer a win-win for the brewery and students. Especially for the students, experience in a brewery is invaluable. “People think it’s so glamorous, you know, working for a brewery, or you are a brewer, but bottom line is it’s a lot of work,” he says. “And I think before you take a different career path or get into brewing, you might want to volunteer and see if it’s what you want to do.”

In addition to experience, Buckowski says an important quality is to fit into Terrapin’s atmosphere. “We hire a little differently because we have a culture at Terrapin,” he says. “So someone might be, let’s just say, resume perfect, but if their personality or attitude, you know, we think they couldn’t fit in with the organization, that’s a big strike for us.” And sooner or later, Buckowski says, brewers at Terrapin will end up going to brewing school.

Extending past the act of brewing, Dave Ketchen aims to prepare students for the growing competition. Ketchen will teach a course at Auburn on the business side of brewing, focusing on strategic management and entrepreneurship.

“The craft brewing segment of the brewing industry has been growing dramatically, and all indications are that it’s going to continue to grow… but there are so many craft breweries opening up that the competition is certainly going to get a lot more fierce,” Ketchen says. “And that’s an area where we think we can be really helpful. We can put people in a position to be really successful once competition gets fierce.”

While Auburn’s brewing program is responding to high levels of interest and a growing industry, the University of Georgia College of Agricultural and Environmental Sciences dropped its only brewing-specific courses 10 years ago, says Dean Scott Angle. Parts of the brewing process, however, are taught in conjunction with other courses. “On the brewing beers, some of the specialty liquors, we really don’t have a whole lot going in that area right now,” he says. “I’ve not seen a lot of interest in that, so we would respond to a demand if there was one, but I have not seen—we’ve not gotten a lot of requests at this point.”

Rather, the focus of some courses, study-abroad programs and internships is on wine making. “It’s a growing business in the state, and our job is to support businesses, and especially those that are growing,” Angle says. “So viticulture and enology, that’s a perfect example of where we’re going hand-in-hand with the industry that’s on the rise right now.”