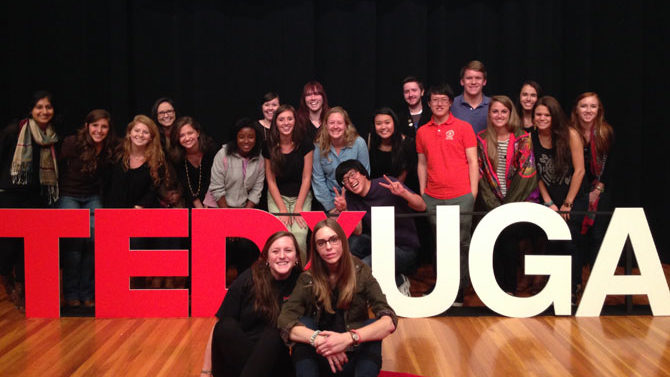 Despite doubling the number of seats from its introductory year, TEDxUGA sold out its 350 available tickets in less than two hours.

“Within 45 minutes, we had sold out all of the student and alumni tickets,” says Scott Shamp, curator for TEDxUGA. “And in another hour, we had sold out of all of the faculty tickets… We have never tapped into something that is of interest to such a wide range of people as TEDx is.”

TEDxUGA is an independent, localized TED event. The TEDxUGA conference was organized by students and faculty at UGA, but it follows guidelines provided by TED, a nonprofit that brings in experts to explain complex topics for a general audience and posts short videos online, where some rack up millions of views. The conference includes 16 alumni, faculty or student speakers and performers sharing their ideas and experiences.

Alex Snipes, a junior at UGA and president of TEDxUGA, says an organization such as TED is important for such a large campus. “I feel like a lot of times at UGA, we’re kind of pocketed, and special interests kind of stay on one side of campus,” Snipes says. “I think an organization like TED was was necessary to let everyone sort of come together and bring a lot of different ideas from different areas of campus together.”

A wide variety of student and faculty presentations were selected. Narke Norton, a senior at UGA and student presenter, will discuss debating during his TEDx talk. His idea behind the presentation stemmed from past experience in campus organizations, many which involve debate and discussion. “They thought that my idea was unique in that a lot of people on campus may not know about Demosthenian and Phi Kappa, which are the two debate societies here, and the fact of how difficult it is to speak in public—it’s a big issue,” Norton says.

Each presenter was assigned a three-person team to help her perfect timing, visual aids and honing in on the message. Norton saw “moderate changes” in his presentation after working with the team, but Roger Hunter, a UGA alumnus and project manager for NASA’s Kepler Mission, had more issues in fitting into TED’s time limits. “Since the theme of this TED is big ideas, I said, ‘Well, here’s my big idea. Your generation is going to be the first to confirm a life-bearing planet beyond our solar system,’” Hunter says. “And how do I say that in 15–18 minutes?”

Despite Hunter’s position at NASA, Emily Berry, a member of Hunter’s advisory team, says he was receptive to criticism and easy to work with. “I was a little worried about my communication skills going into this because I’d never talked to someone, obviously I’ve talked to older people, but not in this kind of situation,” Berry says. “And so I was nervous about how [Hunter] was going to take my advice and stuff like that, but I feel like he pretty much treated me like an adult, so I had better communication with him.”

Student advisers may be intimidated at first, Shamp says, but the enthusiasm of presenters and students helps overcome that and improves the quality of the event. “For me, my goal isn’t the number of people in that room. It’s the power of the presentations and the excitement in that room that will gauge whether it was a success,” Shamp says. “So I think that we’ve got a pretty good lineup that will be exciting and different and weird.”

After attending TED talks in the past, Hunter says he’s excited to work with TEDxUGA. “I think the best thing about TED talks is that you cannot, we don’t have the capability yet, to just hook somebody up like the Matrix movies and say ‘I’m going to download some information into your brain,’” he says. “But, this is our current methodology today, is to spill a curiosity into somebody who can become passionate about something.”

TEDxUGA has generated a lot buzz on campus, but Shamp says it’s impossible to pin down what will be most exciting—to find out, you’ll have to watch. “I’ve been to a number of TEDx’s, and I’ve been to some TEDs, and the weirdest thing is, the most impactful presentations are the ones you least expect it,” Shamp says. “So if I were to tell you what was going to have the biggest impact on me, I’d be wrong. I won’t be able to tell you until I’m sitting in that room and all of a sudden it’ll hit you.”

TEDxUGA will take place in Tate Student Center Grand Hall Friday, Mar. 28 from 1 p.m.–6 p.m. For those without tickets, it will be streaming live in the Tate Student Center Dawg Pen. For a full list of speakers and performers, visit tedxuga.com/2014presenters.