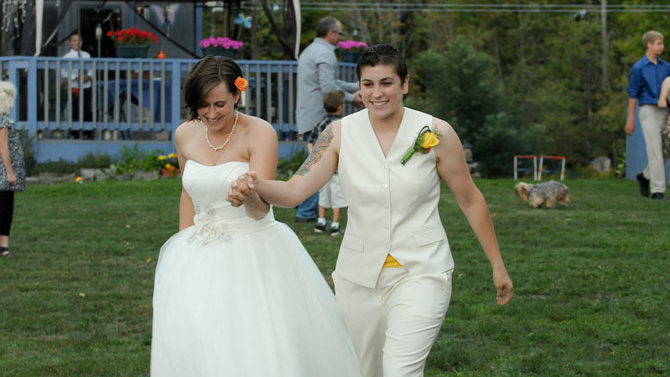 “When I filled my paperwork out, the human resource lady had no idea how to fill it out. She had to call somebody,” Oliver-Provost says. “She thought I did it wrong. It’s ridiculous.”

The confusion never came from complicated tax forms or misinformation. It all came down to being required to file under two marital statuses—single on a state level and married on a federal level. Mary Pat and Jennifer were legally married in New York a year and a half ago, but when they moved to Georgia, their marriage was no longer recognized.

With the class-action lawsuit filed last month by the gay-rights nonprofit Lambda Legal, the couple is hoping they can put excess paperwork behind them. The lawsuit was filed on behalf of a widow and three same-sex couples and challenges Georgia’s constitutional ban on same-sex marriages and civil unions, passed by the state legislature and overwhelmingly approved by voters in 2004.

The Time Is Coming

The lawsuit puts Georgia alongside more than 40 states where similar lawsuits have been filed. The U.S. Supreme Court struck down the federal Defense of Marriage Act last year. Since then, federal courts have ruled in state after state that banning same-sex marriage (or at least refusing to recognize marriages performed where it’s legal) violates the 14th Amendment equal protection clause of the U.S. Constitution.

“I am not familiar with the Georgia case in particular. However, my understanding is that since the Supreme Court decision last summer in United States v. Windsor striking down the federal marriage statute, most of the cases in the lower courts have ruled in favor of same-sex couples seeking to marry,” says Randy Beck, a constitutional law professor at the University of Georgia. “That result is not inevitable, but it does seem to be the current trend in lower-court cases from around the country.”

Attitudes about same-sex marriage are rapidly changing, so many saw this lawsuit as inevitable. In Georgia, where the gay-marriage ban passed with 76 percent of the vote 10 years ago, residents favored it by a 48–43 margin in a September 2013 Atlanta Journal-Constitution poll.

“As more and more states are recognizing that marriage is something that we do recognize on a national level, the arguments against same-sex marriage make less and less sense,” says Janet Frick, a psychology professor and chairwoman of the University Council’s Human Resources Committee. “For example, my husband and I were married in Missouri, and when we moved to Georgia, there was never any question that our marriage would be recognized. So it doesn’t make any sense that some states would recognize one legal marriage from another state, but not another legal marriage from another state.”

This discrepancy between states’ policies on same-sex marriages becomes another factor for individuals and couples to consider in moves between states. Some employers in Georgia already offer health insurance benefits for same-sex couples, especially larger corporations such as Delta, Coca-Cola and Home Depot, but others have not made the shift.

DeeDee Kane, GLOBES chairwoman and director of MBA admissions for the Terry College of Business, had to consider that the University System of Georgia does not provide same-sex partner benefits when considering her move from Massachusetts. “There are problems that the state of Georgia and the University System haven’t solved that other places have solved, so it is possible,” Kane says. “So it was strange for me to move from one state to another, and yet I lost some rights of citizenship, when I’m the same person.”

While the lack of benefits does not deter everyone from moving to Georgia, the change in recognition can take its toll. “People thought we were nuts,” Oliver-Provost says of her move from New York to Georgia. “It was a concern, but it wasn’t a deterrent… But I think it’s affected me a little more than I anticipated. We both work in kind of service professions, so it’s like we’re both very much into serving our community and serving people. I guess I feel almost kind of a resentment.”

The lawsuit, however, may be the push companies need to offer same-sex partner benefits—either through force or by making it more economically viable. “The thing is that there are so many places where, like at my job, it hasn’t really been brought up yet, or they’re smaller and maybe it would be more financially difficult to start covering more people,” Provost says. “Or maybe they’re just, you know, we live in a really conservative state, so if there are employers with really conservative beliefs, there are a lot of places that won’t offer those kinds of benefits that could really help families out —unless they’re forced to.”

If the court rules favorably on this lawsuit, Frick says she does not believe changes would be slow-moving in Georgia. although there will be people speaking out against lifting the ban. “I think that politicians are caught in a little bit of a dilemma. They need to take a conservative position sort of in terms of what voters think, but I think conservative politicians realize the business reality is that we lose competitiveness,” she says. “We lose being able to attract certain employers and certain types of employees by having policies that are on what is clearly becoming the losing side of this cultural shift.”

Kane’s hope is for the South’s reputation for hospitality to finally be applied to acceptance of all marriages and individuals. “One of the reasons that prompted my move here from New England is the culture of the South—the hospitality and the friendliness, the extra consideration we give each other,” she says. “It’s very nice, and it’s very welcoming. It makes sort of your daily life a lot more pleasant… and I think that we could use it to extend it to these types of equity issues.”

Aside from financial and cultural benefits, this lawsuit would afford same-sex couples the chance to operate as an average married couple. For Provost and Oliver-Provost, this means an easier time starting a family. “It’s just such a gray area,” Provost says. “For instance, if one of us were to biologically have a child, there is no guarantee that the other would be able to do a second-parent adoption.”

In matters of both parents adopting a child or one parent adopting the other’s biological child, same-sex couples oftentimes have to work the system in Georgia. “Historically in Georgia some judges will allow it and some won’t, so we’ve already been told that we need to know the schedule,” Oliver-Provost says.

The process of adoption would likely involve a specialized lawyer, tedious timing of the application and more paperwork. “I think the decision to have a child, whether biologically or through adoption, is terrifying enough,” Provost says. “Especially, adoption is such a difficult road to go down financially and emotionally and everything that to go down it and know that you might be rejected because your marriage is deemed different than your next-door neighbor’s, it just adds so much stress to a process that is already so stressful to begin with.”

With their move to Georgia, Provost and Oliver-Provost worked with Georgia Equality, an LGBT resource center, to ensure the paperwork established hospital visitation rights, financial power of attorney and their last will and testament. Without this paperwork—unnecessary for heterosexual married couples—it would be possible to prevent Provost and Oliver-Provost from exercising the same rights a heterosexual couple would have in an instance of emergency, such as Intensive Care Unit visitations. “You would want to think that wouldn’t be the case,” Oliver-Provost says, “but we’ve heard stories.”

Nationwide, a trend toward acceptance of same-sex couples and marriages has grown along with the number of people comfortable with coming out. Frick says the pattern of acceptance and more people being open about their sexuality is a cyclical movement which influences political opinion. “So even among people who have more conservative political views or religious views… if they have a personal friend or family member who is in a same-sex relationship, they are much more likely to support marriage equality.” 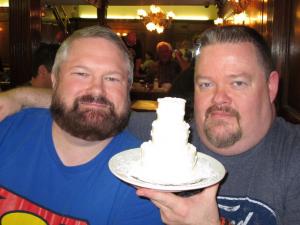 Bill Henry and his husband Randy Gordon think the growth in support for LGBT couples shows the ban on same-sex marriage is out of touch. “The people that got out and voted for the constitutional amendment in Georgia, I don’t think that could pass now,” says Henry, a Lawrenceville resident and member of Our Hope Metropolitan Community Church in Athens. “I think that things have changed. It might be very narrow of a margin, but I don’t think that could happen now.”

Henry says opponents of marriage equality are simply the “vocal minority,” but many take hurtful paths to express their opinion. The day Lambda Legal’s lawsuit was filed, Henry saw and received negative comments on a WSB-TV video reporting on it.

As a member of Our Hope MCC, a historically welcoming and LGBT-supportive church, Henry finds it difficult to consolidate the opposing views of religion. “It’s kind of hard to be in a situation where you look upon your religion as God is love, God is accepting of everyone,” he says, “and then other people take that same religion and try to twist it around and be so negative with it and try to be so hateful.”

Gordon echoes this sentiment. “Religion makes a wonderful weapon when people twist it to fit whatever agenda they’ve got,” Gordon says.

While Our Hope MCC performs marriage and commitment ceremonies for same-sex couples, its pastor, the Rev. Renee DuBose, says it is important to distinguish between religious ceremonies and what is recognized by the state. From Our Hope’s perspective, nothing will change in its marriage or commitment ceremonies. “That’s the conversation that people are having, is what you do in a religious ceremony doesn’t make you legally married. That’s just what you do as a part of your spirituality,” DuBose says. “So the lawsuits, either here or in any place, basically say that separation of church and state requires that every citizen should have equal access to marriage. So the lawsuit is not on religious grounds, but on civil marriage and equal rights grounds.”

Henry believes people need to realize that supporting marriage equality does not require a change in religion or even acceptance on an individual level.

“People don’t seem to understand very often that this isn’t about forcing someone’s religion to accept marriage equality. This is about allowing people who are married or want to get married to be able to have the same rights and privileges as an opposite-sex couple,” Henry says. “For me personally, love is love, and you very much cannot help who you love. And it shouldn’t be any different. And our relationship doesn’t affect anyone else.”