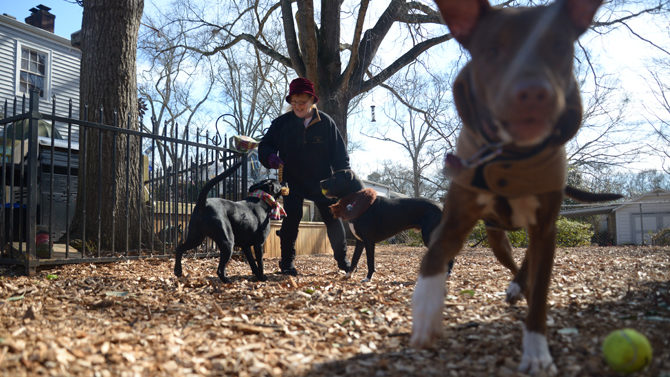 Arva Weinstein started pet sitting in Athens almost 15 years ago, and last February, she took up the fight to make it legal.

Two days after giving her address to a potential customer via Dog Vacay, a California-based corporation Weinstein worked for, the Georgia Department of Agriculture knocked on her door with a stop order. “She said if I continued to take care of people’s dogs, I would get charged with a felony or I could get put in jail,” Weinstein says.

Two days later, a code enforcer from the Athens planning department stopped by to make sure Weinstein was complying and no longer taking in dogs. “I know that I didn’t have all the proper licenses, and I accept that. But I want them to change it to make it so that people can do it,” she says. “There are so many people that are unemployed and that need a job.”

Weinstein first spoke with Mayor Nancy Denson to work out the problem. “[Denson] said she felt like she had to tell me in person, that she couldn’t call me and talk to me and tell me this, but that there was just no way they could allow somebody to take care of dogs in their home because of the neighbors and the noise,” Weinstein says.

After that, she spoke to her commissioner, Jared Bailey, to get in-home pet sitting included in Athens-Clarke County’s home occupation ordinance. “We discussed the way that the current home occupation law reads, and what its limitations are, and we asked questions about the possibility of getting it changed,” Bailey says. “Armed with that information, I made a request of the mayor that it be assigned to the planning commission to review… to consider including pet-sitting as a home occupation.”

“The main thing about home occupations is that folks outside the house… don’t realize there’s a business going on inside,” ACC senior planner Rick Cowick says. “So you can have it in your house as long as it remains a house in appearance and there’s no noise or odors, anything to affect the neighbors.”

Neighbors, community members and former clients wrote to the planning commission supporting Weinstein’s pet-sitting business, including Holly Payne, a Realtor in Athens. “I think it would be a great addition to the bylaws to allow in-home pet sitting services… Adding this business has no downsides, only benefits,” Payne wrote.

Concerns voiced by planning commission members included animals being too noisy and disturbing neighbors, pet sitters keeping too many animals at a time and difficulties in monitoring pet sitting businesses, according to the meetings’ minutes. Denson says establishing parameters and enforcement vehicles also complicated the process of allowing in-home pet-sitting businesses. Bringing new dogs into a residential environment has a greater potential for a disturbance, she says, than a resident simply having multiple dogs.

“I was asking [Weinstein], what’s the difference between someone having three dogs of their own and having a dog and boarding two?” Denson says. “The difference is those dogs that live at some place all the time are used to the noises… and they’re much less likely to be barking and disturbances of the neighbors than when you bring unknown, strange dogs into contact with each other.”

Weinstein says she believed adding constraints to the home occupation ordinance could have helped manage these potential problems. “The discussion between the planning commissioners just kind of blew my mind,” she says. “It was like, ‘Well, what if they don’t have a fence?’ and I was like, ‘Say that’s part of the rules.’… It’s like things that seemed so simple to put into wording.”

“They [the planning commission] wanted to have more discussion,” Cowick says. “They actually went ahead and passed the rest of it, and then wanted to think more of the pet-sitting, or kennel type, business. So they actually had a separate discussion on that item.”

Jeff Scarbrough, a member of the planning commission, originally supported the idea of allowing an in-home pet-sitting business. He said he didn’t see much support for it, except for Weinstein speaking at planning commission meetings.

“My feeling was that I had hoped that a compromise could be reached, because I would hate to deny anybody a reasonable chance to make a living,” Scarbrough says. “But in the course of discussion, there was the discussion of the pros and cons and then there didn’t seem to be a whole lot of push for including it.”

Denson says it was better that pet sitting was not included in the revised ordinance. “I personally think it’s better that it was not passed,” she says. “I sympathize with Ms. Weinstein because she is a very nice and very responsible person, but the problem is, when you pass an ordinance it covers an entire county.”

The article has been updated to clarify who suggested dropping the topic of pet-sitting and when.