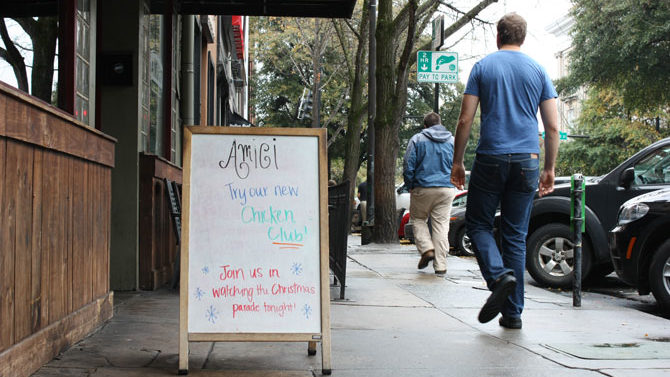 Since August, the Athens-Clarke County Community Protection Division has issued at least 50 warnings and two citations to businesses for placing sidewalk signs outside. The signs impede the flow of foot traffic, officials say, but some downtown business owners disagree.

Bar South has been putting a sign out six days a week for the last two years, says general manager Amy Summerford, but it wasn’t a problem until the day of the Georgia-LSU football game Sept. 28, when a code enforcement officer came by during happy hour and insisted her staff move it to the porch. That was all right for a month—until another official ordered the bar to move its sign inside.

“I understand that the sidewalk is public property, and I guess if they want to charge us for it, they can,” Summerford says. “But I thought it was pretty crazy when they wouldn’t let us keep it on our own porch. We pay a fee for our porch, so we should be able to keep it there.”

Ryan Myers, Amici Cafe’s co-owner and general manager, says his business has used the same sign for three years without any trouble.

Now, though, it’s got the restaurant at odds with the law. “Our sign is not egregious,” he says. “It sits flush against the side of the building. It doesn’t stick out as far as our sidewalk cafe, our dining area. So it’s not really in anybody’s way.”

The county’s concerns about public safety may be misplaced, according to Myers. “This doesn’t impede any more the flow of traffic than a light pole or a parking meter or a trashcan or a newspaper box or a park bench or any of these things that are already there,” he says.

CPD Administrator John Spagna says that the crackdown on sidewalk signs is part of a larger initiative to clean up downtown, and that the county has also been addressing garbage and graffiti issues.

“Signs in the public right of way are not allowed, and we intend to continue to work with the businesses to understand that,” Spagna says.

The ACC Commission passed the sign ordinance in 2005 over concerns about safety and Americans with Disabilities Act compliance. A blind man had threatened to sue because he kept tripping over signs in the middle of the sidewalk.

Some business owners are skeptical of the county’s motives, though. Jackson Street Books owner Tony Arnold, who installed his neon window sign in 2008 after his sandwich-board-using business was threatened with large fines, laments the lopsidedness of code enforcement.

“In my experience, most of the ordinances exist in order to facilitate generating fine monies, whenever they are enforced,” Arnold says. “Otherwise, the public health concerns of stale beer and rotting food and rodents dripping into the storm water collection system would’ve become a priority at some point during the last quarter century.”

Business owners also question the timing of the sudden move to enforce the law. Summerford says she’d heard of sign permits before but never felt the need to acquire one. In the past, Myers says, the sign ordinance wasn’t taken so seriously. “It seems to be a thing that they rally around once a year… and then we never heard from it again,” he says.

With business owners speculating about football season and the impending Clayton Street construction as possible causes for ACC’s sudden strictness, Spagna says that “it’s nothing deeper than the fact that the fall brings a busier time to Athens, as well as to downtown.”

And the busiest time for downtown is after code enforcement hours. “People know when the city’s not working,” Myers says. “If you come out at 9 or 10 o’ clock at night when the bars are opening, all of them have their signs out. And the streets are even more crowded with people.”

Amici and Bar South aren’t planning to fight the city over the issue. They, like other downtown businesses, including Magnolias and Juice Up, have moved their signs inside—for now.

“We fully understand the reason behind it,” Myers says. “We’re willing to cooperate, but this thing has to be a level playing field across the board.”

Myers would like ACC officials to rethink their priorities.

“You look at most of these signs that people put out, they’re not in the way,” Myers says. “To us, it just seems like busywork for somebody to do. It just seems like a waste of time. Surely there should be other problems in town to worry about.”