The Parade of Lights Brings the Sounds of Christmas Downtown 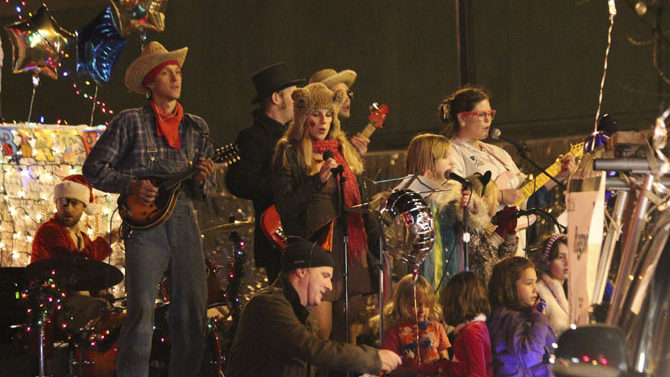 
With Christmas right around the corner, another Parade of Lights will soon be making its way through the streets of downtown Athens, drawing crowds of spectators that can rival University of Georgia home football games.

Athens-Clarke County’s annual downtown festivity has been a staple of the community for decades. It’s always been held on the Thursday after Thanksgiving and carries a Christmas theme. This year’s theme is “The Sounds of Christmas.” 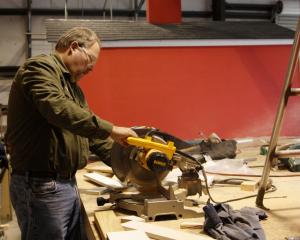 Chris Chapman, owner of Chapman Fence, works on his float for the Parade of Lights.

Robin Stevens, community outreach coordinator for the ACC Leisure Services Department, says there will be more than 40 floats in the parade this year in addition to the other entrants. She adds that as long as hopeful participants meet the deadline—which was last Friday—and criteria, they are allowed in.

“However, for the last two years the parade has exceeded the ideal number of entrants, which is closer to 65-70,” Stevens says. “If this continues, we may start having to decline entries. We try to keep the parade to an hour, and the route itself is just under a mile.  When we get to the size that we are this year, we likely will push the limits both on time and distance. “

According to Stevens, there will be 21 performing units, five marching bands, 48 float entries and as many as five special entries, which will include Santa. “More than 1,500 people will be in the parade itself this year,” Stevens says.

Flagpole looked into the history of when the parade started, but ACC’s institutional memory goes back only so far. “It’s been going on as long as I can remember,” says Jean Spratlin, the clerk of commission for four decades. Many other long-time parade-goers echo her memory.

Retired ACC employee Don Oliver—who was in charge of the parade for 25 years before leaving in 1999—says that a private citizen used to run it prior to him, but he couldn’t say for sure whether or not his involvement was the first city participation or if he had inherited the duties from someone else.

There’s a mention of an Athens Christmas Parade chairman in ACC public documents going back to 1960; however, there is no definitive information about the Parade of Lights’ inception.

First-time participant Chris Chapman, owner of Chapman Fence, says he and his wife have enjoyed the event for several years as spectators. His float will carry the a theme from a popular Christmas song “Up On The Roof Top.”

As a spectator, one thing Chapman says he noticed was that floats were lacking an “interactive” element to them. That is when he came up with the idea to have a working rooftop landing strip. A zip line from one end of his float will carry children dressed in reindeer costume from one end of the float to the other, which is made up to be a mock roof.

More and more floats have live music, and this year’s Athens music float—sponsored by Flagpole, the 40 Watt Club and AthFest—features Cracker with David Lowery. 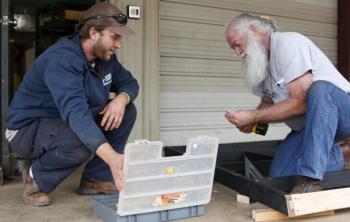 John Rogeberg and Terry Aaron of the Athens-Clarke County Public Utilities Department work on their float for the Parade of Lights.

Other float-builders, like the ACC Public Utilities Department, are incorporating the music theme in different ways.

“To go with the sounds of Christmas, our theme is ‘I’ll Have a Blue Christmas Without You.’ We are taking the fact that the average American uses 100 gallons of water a day,” says Laurie Loftin of PUD. “It is hard to visualize how much 100 gallons is, so we are making a snowflake out of 100 gallon jugs. Imagine how blue one would be without the blue of water.”

The parade begins at 7 p.m. Thursday, Dec. 5. The route of the floats starts on the corner of Dougherty and Pulaski streets and finishes in front of City Hall for the traditional tree-lighting ceremony.

“Now, if Flagpole can insure a cool and dry forecast, we’re good to go,” Stevens says. (We’ll do our best.)