The Bigger Vision Homeless Shelter Has a New Director 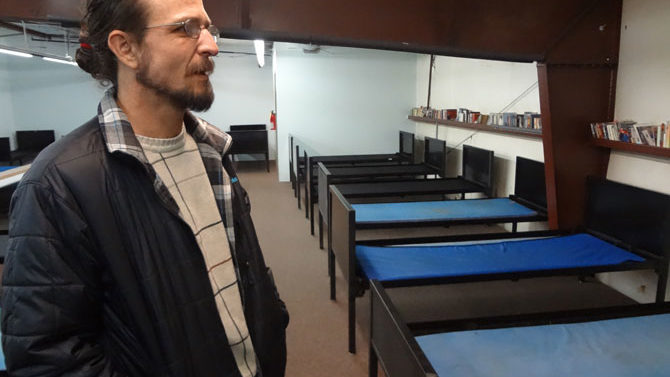 The Bigger Vision of Athens has a new director with big plans. The nonprofit, which operates the Bigger Vision Community Shelter, a homeless shelter at the corner of North Avenue and Willow Street, recently opened for the winter and hired its first paid director, Ed Moore, a veteran Georgia social worker.

“I think there’s a good chance we’ll always maintain a winter shelter in some form,” Moore says. “But I think we’ll probably at some point open up either a long-term shelter or maybe something involving recovery from drugs and alcohol.”

Moore got involved at the emergency homeless shelter several years ago, when it was still bouncing between churches and before it was called Bigger Vision. He began volunteering during evening meals and eventually became an overnight staffer. When the shelter opened for this winter on Oct. 12, he stepped up as its first full-time director.

“This seemed like a great opportunity to work on something on a bigger scale,” he says. “You know, to sort of jump in and get my hands dirty with something a lot bigger—and maybe more impactful on some level.”

Moore, who has a degree in social sciences from New College of Florida, started graduate school at the University of Georgia but launched into mental health work with Advantage Behavioral Health Systems following his own mental health crisis. He then worked for Georgia’s SSI/SSDI Outreach, Access and Recovery program among the homeless of Athens and Savannah, even serving for a while on Bigger Vision’s board of directors. Now he has plans to pursue a master’s degree in social work.

“He’s got the type of personality that he gets along really well with our clients, and they trust him,” says Jim Meunier, president of the board and long-time volunteer. “We had about as many of the homeless recommend him as we did the references that he got. They like him, and they identify with him.”

Moore’s reappearance at Bigger Vision came in the wake of Richard Andersen’s death in July 2012. Andersen and his wife, Barbara, became involved in the shelter after it was started in the St. James United Methodist Church fellowship hall in 1998. The pair began acting as shelter coordinators in 2001. Three years later, the shelter was asked to leave St. James after a homeless man started a fire in the church. It then bounced around among church buildings downtown and on Atlanta Highway for the next several years.

Paying a director wasn’t an option; it was a volunteer position, like every other one at Bigger Vision. But earlier this year, things changed. The shelter moved into its North Avenue home in 2010, but it was still paying for the building and renovations until this spring, when several anonymous donors wrote checks to cover the remaining balance.

“That allowed us to hire a full-time director whose primary responsibility is to try to help the homeless,” Meunier says. “We’re not a job location site, but trying to help our guests get their disability if they’re qualified, Social Security, veterans’ benefits and help them to get off the street. That’s one of our primary goals now.”

The shelter, which has space for the first 35 people who call each evening from mid-October to mid-April, receives no government funding and relies entirely on community support. But this season, Meunier says, less funding has materialized than in years past.

“We’re sort of counting pennies instead of dollars,” he says. “But I really am not worried about it. So far, we’re here—that’s all we can really count on.”

The Athens homeless are counting on it, too. According to the latest U.S. Department of Housing and Urban Development annual point-in-time count of the homeless, 95 locals were sleeping outside and 119 in shelters on the night of Jan. 31, 2013. Twenty-six of the shelter-dwellers were children.

“Over the years, the number has fluctuated back and forth,” says Samanta Carvalho, a community development specialist with Advantage. “When Bigger Vision opened up, we saw a real reduction in the number of unsheltered homeless that we had. They definitely have a big impact on the community in helping people find housing during the winter months.”

Bigger Vision isn’t the only homeless shelter in Athens, but it fills a unique niche. Unlike the Athens Area Homeless Shelter or Interfaith Hospitality Network, which serve primarily women, children and families, it accepts single men. Unlike the Salvation Army, it has a policy of allowing anyone to stay regardless of substance abuse issues. And by opening during the cold winter months, it adds to the city’s stock of shelter beds at a time when it’s most dangerous to sleep outdoors.

Bigger Vision won’t be a winter shelter forever, Meunier says. But right now, it doesn’t really have the funding. Once it has the resources, however, providing yearlong shelter will be a priority.

“That would be wonderful, because then we definitely would see a lot fewer people living on the street,” Carvalho says. “But definitely during those cold months, they make a huge impact. They’re providing 35 beds for people who would otherwise be living under bridges or in tents.”