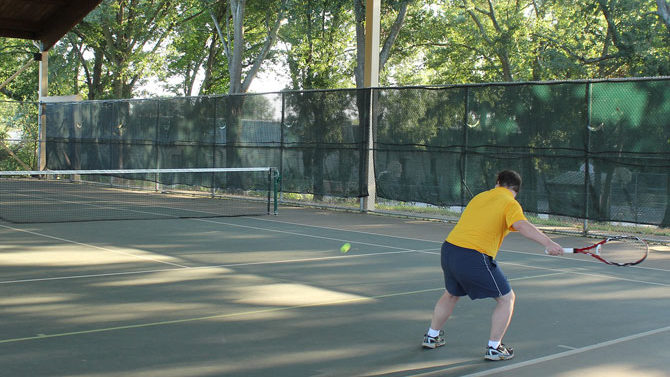 Click here to read about Leisure Services’ decision to replace Tennis for Life, a move that irritated tennis players and cost taxpayers.

The 12 new courts on the Eastside, promised as part of the county’s new SPLOST-funded tennis center, now won’t be ready until October, thanks in large part to a wetter-than-usual spring and summer. In the meantime, the courts at Bishop Park—for many years the go-to park for tennis in Clarke County—are crumbling after years of overdue resurfacing.

As a result, the local tennis community, already fractured following the county’s decision not to renew its contract with the private tennis-lesson provider Tennis For Life, is forced to play on courts at local schools or private facilities, or go to Oconee Veterans Park.

Ask most tennis players in Clarke County about the state of Bishop Park’s courts, and they’re not shy about their opinion. 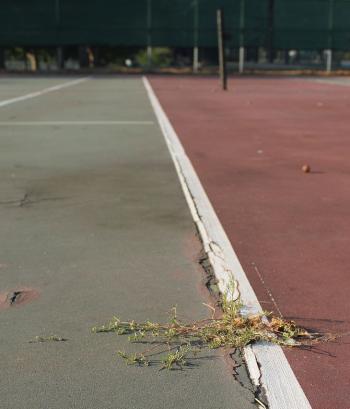 “It’s horrible. The courts have been in disrepair for years, culminating in large cracks in the courts, with grass growing through them,” says Cindy Fetch, an Athens resident who has been playing tennis in Clarke County for 30 years. “The netting is bad, but the biggest thing is the courts are unplayable. And we feel like we’ve been getting the runaround as to when the repairs will happen, to the point where I’ve just given up on the situation. I won’t even play at Bishop Park anymore. It’s just a disappointing situation.”

Thankfully, Fetch and other tennis enthusiasts won’t have to wait much longer. On Sept. 3, Athens-Clarke County Commissioners green-lit about $180,000 remaining from the SPLOST 2011 park upgrades fund to resurface the aging Bishop Park tennis courts. Within two weeks, the courts were locked up, and construction began Sept. 16 on resurfacing the nine outdoor courts.

Two other courts located under the covered pavilion at the park will not be resurfaced at this time, says Keith Sanders, the project administrator who is handling the construction at Bishop Park. But Southeast Tennis Courts, the company that was awarded a contract last year to resurface three of the courts, will instead do all nine outside courts at once.

Part of the frustration expressed by Fetch and others stems from years of requests from the public to resurface the courts. In 2011, according to documents obtained by Flagpole through an open-records request, residents, along with Stacey Venker, director of the privately run Tennis For Life program, questioned why repairs weren’t being made. Rumors began swirling about possible resurfacing timeframes and where that money would come from.

Venker even went so far as to secure a grant from the U.S. Tennis Association to restripe five courts at Bishop Park two years ago. As it was, the harsh winter of 2010-2011 caused the courts to crack even more, Venker told Pam Reidy, director of the ACC Leisure Services Department, in an email.

In December 2011, tennis players were asking Venker what they could do to hasten the resurfacing process, since a sinkhole had also formed at one of the courts. “The captain informed me that the team was not going to use Bishop Park as their home facility,” Venker wrote in an email to Reidy. “This was difficult to hear. The beautiful Bishop Park facility has been allowed to become so run down and neglected over the past years that people are now deciding to play and compete at other facilities outside Athens.”

In an interview with Flagpole, Reidy says Leisure Services originally wanted to use its maintenance funds to resurface the courts, and asked for bids on the project last year. “We received one bid, and it was out of our budget by too great a margin for us to be able to do the work at that time,” she says. “Since then, we have been able to allocate our SPLOST 2011 project money to this project, and so this time, when we went out (for bids), we had the funding available to do it.” According to the most recent SPLOST bid, a bank of three courts costs about $70,000 to resurface.

Reidy says it’s been between six and 10 years since the courts were resurfaced. While the lifespan of a tennis court’s surface depends a lot on the weather, generally speaking, the courts should be resurfaced every six years.

Further complicating the project is the persnickety nature of resurfacing a tennis court. Unlike baseball, softball, soccer and football fields, which require a regular sweep of a mower for maintenance, a tennis court must be resurfaced under specific weather conditions.

“Tennis courts are like no other paving,” Sanders says. “You have to get the temperature right, so in order to get it done before winter, they need to be working on all nine at one time. Once you put the asphalt down, you have to let it cure for 30 days before you put the (lines) on it.”

Such is the case at the new tennis center at Southeast Clarke Park, where concrete sidewalks have yet to be poured and stripes on the courts are still missing. That facility, once slated to open earlier this past summer, should now open in October, Reidy says.

“A lot of it is dependent on the weather and how that continues to look,” she says. “All of the rain has caused construction delay after delay, and that’s the one thing that’s out of our control.”