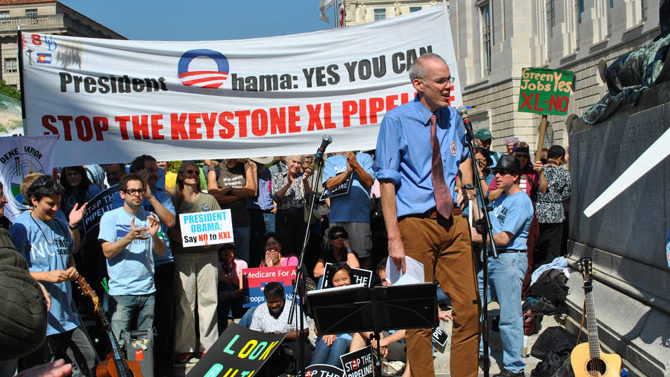 The Georgia Climate Change Coalition (GC3) will join 113 other environmentalist groups from across the country, as well as many others across Canada and Europe, to protest against the Keystone pipeline Saturday, Sept. 21.

The international effort, known as “Draw the Line—Stop the Keystone XL Pipeline,” is being organized by the environmental group 350.org. Bill McKibben, founder of 350.org, says in order for President Barack Obama to “keep his climate promises,” he has to put a stop to Keystone XL.

Two phases of the pipeline run from Alberta, Canada, to refineries in Oklahoma and Illinois. A third phase, approved by the Obama Administration in March, will run from Oklahoma to Port Arthur, TX.

The controversial fourth phase would connect Alberta and Oklahoma by a different route, through Montana, South Dakota and Nebraska. It would run over the massive Ogallala Aquifer, which provides water to much of the Midwest. Critics also say extraction from oil sands like those in Alberta emis more greenhouse gases than conventional drilling.

One of the ways the Georgia Climate Change Coalition hopes to stop climate change from the burning of fossil fuels is through a divestment campaign—asking all companies and organizations who are for “going green” to get rid of any fossil fuel investments.

“Our fellow citizens, UGA and Athens-Clarke County have ‘gone green’ in many important ways, but we need to change laws as well as light bulbs,” says Rich Rusk, an Athens resident and GC3 secretary.

GC3 will begin its march at 10 a.m.—about two hours before the UGA-North Texas game kicks off—at the D.W. Brooks Mall on South Campus. The route will take the protesters past UGA’s coal-fired power plant, Sanford Stadium, the office of the president and to Athens City Hall, where GC3 will announce its “fossil free” divestment campaign for ACC and UGA.

Organizers are urging participants to walk, bike, carpool or take a bus to the protest due to game day traffic as well as to help the environment. UGA buses are not running, but Athens Transit’s Route 5 stops in front of Park Hall, a short walk from Sanford Stadium.

When Flagpole asks Rusk if he thought that the masses of football fans would listen or take notice of the march and protest next game day, he says, “Some day they will, or the Georgia Bulldogs will have to play their games in an air-conditioned stadium.”

UGA Vice President for Public Affairs Tom Jackson says UGA does invest in “natural resources as part of a diversified portfolio” and that some of those investments include fossil fuels. He adds that they also invest in renewable energy sources like wind and solar.

“I would say that investment in fossil fuels is clearly only a percent or two. It’s certainly less than 5 percent of the total portfolio,” Jackson says. “We don’t have a direct investment policy. Our investments are handled by account managers at various foundations.”

In a time when the state continues to cut funding, UGA relies more and more on endowment funds to support students and faculty.

“It’s important that our investments give us as much return as possible. People’s scholarships depend on how well the endowment does,” Jackson says. He adds that it would take a lot of people involved with the various boards and committees to make a decision to change their investment policy.

Jackson says he’s “not aware” of any time where outside influence has dictated an investment policy change. As of press time, ACC  finance officials could not be reached for comment.

Rusk first got involved as an environmentalist during Georgia’s drought in 2007. As an avid fly fisherman, he began to have serious concern when the trout started dying off due to the drying up of the Chattahoochee River.

His father, Dean Rusk, secretary of state under President John F. Kennedy, told him that global warming would be the issue of his generation.

Rusk recalls his father telling him that organizing people to stop climate change “will require an unprecedented level of global corporation, more difficult than the 40-year standoff with Russia and the Soviet Union.”

“This one is yours, and you better get after it,” the elder Rusk told his son.