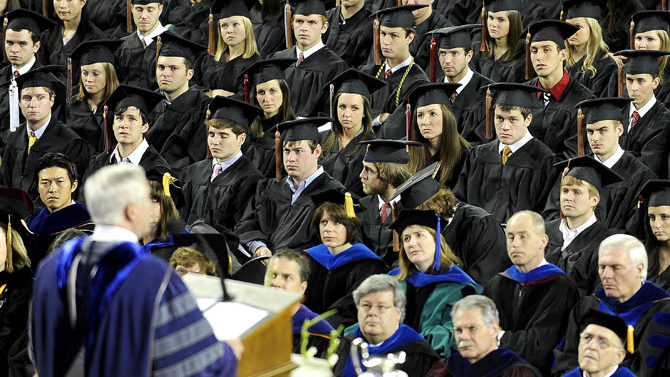 As University of Georgia students turn their tassels this week, they’re trying to stay positive.

Most of this year’s graduating class started work on their undergraduate degrees in 2008 or 2009—the lowest point of the economic downturn. They’ve seen the unemployment numbers shift up and down, heard anecdotes from friends who took jobs they didn’t want and felt the weight of the next big decision: What to do after college?

“I was worried about the unemployment rates when I started college four years ago,” says Monica Sakalik, who graduates Friday, May 10. “I knew people who were getting jobs as servers instead of following a career path, and that scared me.”

Allison Leigh dealt with her doubts by hedging her bets, looking for jobs and researching graduate school options at the same time. “When you hear the job numbers for college graduates, it can be discouraging, and you begin to wonder, ‘Why even bother looking?'” she says. “So I put off searching for a while, hoping that the market will be better and the numbers will improve by next May.” 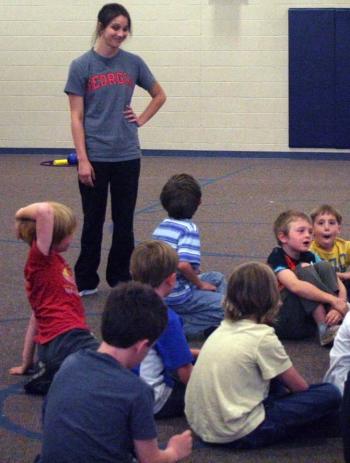 Sakalik started her bachelor’s in kinesiology with the idea that she’d definitely complete a master’s degree. In fact, she plans to pursue a doctorate in occupational therapy after that. “I’ll be in school for a while,” she says, laughing.

Leigh, who graduated last May with a political science degree, ended up pursuing a master’s in public administration.

Classmate Shari McIntosh is jumping from public relations classes into the job world, though she’s still weighing options. Unemployment rates have inched down as the economy recovers, but students are still being cautious. “It’s better, but it’s still hard out there,” says McIntosh, president of UGA’s Student Alumni Council. “It’s highly competitive, and employers want to see specific skills, especially from our generation with social media.”

More Jobs, but Not Enough

The Economic Policy Institute, a Washington, DC think tank that conducts research about the economic status of working Americans, released numbers in early April that showed the unemployment rate at an alarming 30 percent for high school graduates, as compared to 17.5 percent in 2007. It also said the underemployment rate for college graduates is 18.3 percent, which includes those who want a job but have given up looking and those with a part-time job who want a full-time job.

Generation Opportunity, a national organization that advocates for millennials, pegged the unemployment rate at 11.7 percent in March for ages 18-29.

Georgetown University’s Center on Education and the Workforce said the rate for recent college graduates was 6.8 percent in 2012. In March this year, this number dropped to 6.4 percent for college graduates at ages 20-24, according to the Bureau of Labor Statistics.

Early survey numbers show that 82 percent of UGA students who graduated in December are employed or attending graduate school.

“You see numbers thrown around that currently put the number at about 13 percent for ages 18-29, but that age isn’t representative of the typical graduating class for UGA,” says Scott Williams, executive director of the UGA Career Center.  “Our numbers from both employers recruiting UGA students, as well as early responses to our post-graduate survey, indicate that the job market for this year’s class has improved over last year.”

Unemployment numbers look good for graduates in the 25-29 age range who have had a few years of experience in the job world, says Jeff Humphreys, UGA economics professor and director of the Selig Center for Economic Growth. “Older workers have the advantage in a difficult labor market because they have the skills and education that employers need,” he says. “Employers have the upper hand right now and can be selective about who they hire.”

That said, the economy is certainly recovering. About 61 percent of the jobs that were lost across the nation have been recovered, and about 53 percent have been recovered in Georgia. “We’re about halfway back to where we were, and we’re seeing slow and steady job growth in every major private sector,” Humphreys says. That even includes the lagging construction, housing, and financial service industries.

And don’t forget that unemployment rates can be misleading. If young workers have given up on the job hunt altogether or decided to go back to school, they won’t be included in the count, and numbers will be lower. Instead, look at how many jobs and new businesses are being created. “Don’t be discouraged if unemployment rates are high if we’re adding jobs,” Humphreys says. “But know that the rate would be higher if people hadn’t sidelined themselves to go back to school.”

Staying in school isn’t a bad idea.  If you slice the unemployment rates based on education, the numbers are lower for educated workers. Someone with a master’s degree is in a better position to find a job, and someone with a doctorate or professional degree will do even better, Humphreys says. “Educational attainment is highly correlated with finding a job,” he says. “That’s true even during the worst of economic times.”

Salalik has no regrets when she thinks about sticking in school longer. She’d prefer to complete as much school as possible and land a job she loves, and she hopes classmates will do the same. “Find a job that’s the closest to your area of study, and try to use your degree to its fullest potential,” she says. “If you can’t, try to stay busy by making connections and shadowing others. Don’t settle for any job and then get stuck there.”

By building on her political science degree, Leigh enrolled in UGA’s master in public administration program and took on a position in the Office of Development. As a graduate assistant, UGA waives her tuition, and she’s building experience at the same time. Leigh will start the job hunt again in the next year, and she gives the same advice she’ll take herself.

“I think the jobs are out there, but they’re more difficult to find,” she says, advising students to search online, but not necessarily on aggregator job sites such as Monster.com. “Get into your industry and search them out.”

Keeping in touch with mentors and networking with alumni is a good tactic. The Career Center and Alumni Association organize events like a career fair June 12 at the Gwinnett Center that’s expected to attract more than 500 alumni and about 100 employers.

Having a specific interest is key to making connections and expressing confidence in your skills. “I’ve noticed that students seem a bit more uncertain about what they want to do, and I don’t remember those types of conversations 20 years ago,”says Deborah Dietzler, executive director of the UGA Alumni Association. “The world is changing rapidly with technology, so perhaps it’s a societal or generational shift.”

Most of all, finding a job is a process, and the competition is steep. “The point of proving yourself is never going to end,” McIntosh says. “We can never be entirely sure how the economy is going to be tomorrow.”