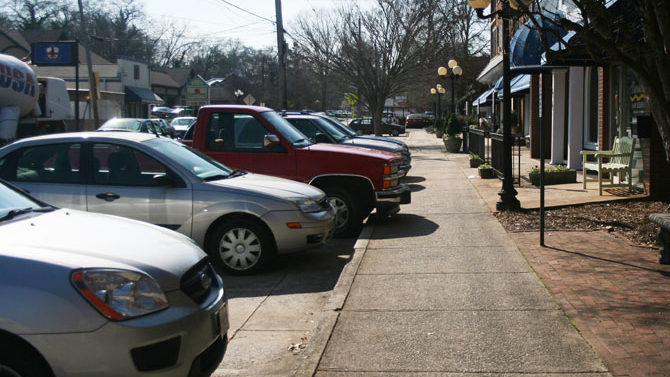 A small number of parking spots in Five Points are a big deal for residents and business owners.

Do 22 spaces on Lumpkin Street—once the neighborhood’s only public parking—really belong to the city or do they belong to Stiles Properties? Superior Court Judge Penn McWhorter will decide in the next month or so. In the meantime, people are already talking about possible solutions for the lack of parking in Five Points.

“I think parking spaces are vital to commerce in Five Points, and it all contributes to the village feel there,” says Athens-Clarke Commissioner Kathy Hoard, who represents part of Five Points. “Customers should be able to park and go into one business to have lunch, get their hair cut, or shop for clothing and then walk across the street to buy a bottle of wine or greeting card before heading home.”

About a month ago, Susanna Drennen, owner of the women’s consignment store Suska, and others gathered for a meeting about steps they can take to address parking complaints. Several business owners suggested a parking system that allows employees of retail stores to park in non-retail lots with spaces to spare, which would open up spots on the street for customers. Under this system, employees would receive a parking permit, notifying other business owners that the car isn’t being abandoned for hours.

“Businesses have parking behind them that are underutilized by customers,” Drennen says. “Either they don’t know the spots exist or don’t know how to get into and out of the lots.”

Signage would help, but signage is also what’s causing the current tensions. The shortage of parking has led businesses to become more protective of their limited spaces.

“There’s never a lot of parking around Five Points, especially during the peak hours of lunch and dinner,” says Julia Bernier, a University of Georgia student who recently lived in the neighborhood. “A friend of mine went to Yoforia and left his car in the Waffle House parking lot for about 20 minutes, and it was towed. I think the businesses are pretty serious about it.”

The parking crunch partly stems from a 2010 lawsuit. Barry Stiles sued Athens-Clarke County, claiming the government breached a 1954 agreement with his father and asking the government to stop enforcing parking ordinances on the property. Part of the parking is on Stiles’ land, but part is public property. Though Stiles has paid taxes on the spaces, the local government maintains them.

When all three Clarke County Superior Court judges recused themselves from the case, visiting judge McWhorter issued an injunction in Stiles’ favor in 2011, temporarily ordering ACC to stop enforcing parking. (ACC had delegated enforcement to the Athens Downtown Development Authority.) At that point, Stiles asked Prestige Parking to monitor the spaces during business hours and, in exchange, allowed them to collect a parking fee after business hours.

ACC appealed the ruling to the Georgia Supreme Court. Though the court upheld McWhorter’s ruling, the justices noted that he didn’t answer one question—whether it was too late for Stiles to take legal action. After last month’s trial, McWhorter will make a final ruling in the coming weeks. No matter the decision, residents know the dispute is far from over.

“The frustration that I hear from people is that it’s hard to park, and there’s not a clear solution,” says Sara Beresford, a former chair of the Friends of Five Points neighborhood association. “We have a commercial district in a neighborhood that we love, and not everyone is in walking distance. Even local people need to park on the way home from work, and parking is hard to do.

“It’s been an issue as long as I’ve been involved in the area, which is eight or nine years, but the pressure feels worse than ever,” Beresford says. “There are a bunch of contributing factors, and there’s not one culprit.”

For example, UGA students have made a habit of parking and walking to campus, leaving their cars for hours in spots that could have accommodated customers throughout the day. Employees of Five Points businesses have been guilty of the same. A parking limit of one hour—with patrolling and metering like the downtown area—would ensure turnover in those spaces, Drennen says.

“My business exists on people being able to drop off items with me,” she says. “I’ve had a customer tell me that she tried to stop three times one day and then took all of the clothes to Goodwill. That’s a huge potential loss of revenue for me.”

With the new Stiles Properties signs, Drennen has seen happier customers at her store. By working with Prestige Parking, customers are allowed 30 minutes of free parking to visit shops across the street if they can show a receipt from her store.

“We want to help people who are actual customers, and we’re trying to figure out how to enforce this parking situation but not lock it down,” she says. “Sometimes this side of the street looks like a ghost town, and it riles people up when they see the open spots.”

Chris Lloyd feels comfortable with the number of spaces available for Marker 7 Coastal Grill, a restaurant he’s opening in Five Points in March, but he also sees the need to increase spaces.

“Originally, builders should have planned for a deck near the [fire station], which wouldn’t have been unattractive or encroaching on the residential homes,” he says. “Some government officials realize the answer to the problem, but they’ve got to go through a lot of people to get this done.”

During testimony in January, Stiles’ lawyer Regina Quick asked Hoard why a recent nine-year package of construction projects, paid for with a 1 percent sales tax, didn’t include a new parking deck. No one proposed one, Hoard responded. Because the list of projects can’t be changed, it will be years before public money could pay for a deck, said ACC Manager Alan Reddish, who testified as well.

Walking and Biking Will Help

Residents are also feeling the pressure. A few who wished to remain anonymous say they’re outraged at the evening parking fees and annoyed with customers and employees parking in front of residences. They even called for a boycott of the businesses housed under Stiles Properties. Others without a strong opinion about the lawsuit just want some resolution.

“We walk to and enjoy the great things that are offered in the Five Points area, but I fear the lack of parking is going to limit growth and profitability even of businesses already there,” says Jim Morang, who lives two blocks from the fire station.

“I try to avoid driving because I often want to go to multiple businesses in the neighborhood but feel like an idiot driving from Earth Fare to Five Points Bottle to The Hub in order to not leave my car where it’s not wanted,” he says. “I’d like to point out that quality bike parking with solid, secure racks would go a long way towards encouraging more people to ride to the area instead of drive.”

Though bikers appreciate the racks at Earth Fare, Two Story Coffeehouse and Royal Peasant, there’s more to be done, Perry adds. “I fully acknowledge that bikes are not a universal solution to the problem, but it has been proven in many cities that quality bike parking encourages people to bike to local businesses,” he says.

BikeAthens members recently emailed members of the Friends of Five Points and the UGA Office of Sustainability to develop a campaign that includes new racks, discounts for customers who bike or walk, and walking tours to promote the idea.

“It’s a tiny incremental start on a big problem in this college town, but any success could be scaled up to other parts of town,” says Tracie Sanchez, a BikeAthens board member and Athens homeowner who first suggested the partnership.

BikeAthens members are looking to Bike Friendly Business Districts, such as Long Beach, CA and New York City, as models. Though the idea is new, it could be part of the solution, they say.

“We have to sacrifice a little in order to gain a lot,” Drennen says. “There’s a way, so now we have to work together on the will.”