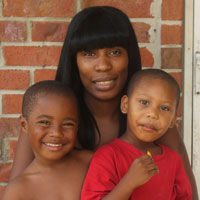 Tearing down the Athens Housing Authority’s Jack R. Wells neighborhood, commonly known as Pauldoe, and replacing it with mixed-income tenants in a newly designed space is the next logical step for much-needed affordable housing.

The AHA, which is working with private developer Columbia Residential on the project, is still waiting on approval of tax credits to help fund construction costs. Mixed-income, public-private developments that aim to decentralize poverty are the latest effort to find a solution to low-income housing shortages in the past 70 years. Public housing has always been woven among issues of race and poverty that go back generations.

The local chamber of commerce, started the AHA, according to spokeswoman Marilyn Appleby. The AHA is federally funded and is now governed by a board appointed by the mayor of Athens-Clarke County.

Athens’ first public housing complex, Parkview Homes near downtown, opened in 1941 where, according to a 1951 city publication, it housed 154 white families. Broadacres Homes, located just inside what were then the city limits at West Broad and Rocksprings streets, opened up less than a year later, housing 126 black families. Rent ranged from $8 to $16 per month.

“What’s important to remember is its original intent was to provide temporary housing for what were then called ‘the worthy poor,'” says Steven Holloway, a University of Georgia geography professor who specializes in race and urban housing. “So, the first generation of housing projects were constructed and managed by local housing authoritiesâ€¦ The idea was to provide temporary relief for public workers, so the residents could never have expected to stay there for any length of time.”

When Congress passed the 1949 Housing Act, Athens adopted plans for 170 more low-rent units at a cost of $235,000. “This money is to be used for clearing slum areas, preparing them for re-use and offering them to private enterprise for needed urban redevelopment,” according to the city newsletter.

Cities, bursting at the seams with World War II veterans, ethnic tenements and African Americans who moved from the rural South, were at a crossroads, Holloway says. They needed affordable housing, but at the same time, shoppers were starting to turn from downtowns to new suburbs. Thus began several decades of “urban renewal” projects in large cities across the country, Holloway says. Cities would designate entire blocks as “blighted,” then, with the help of federal dollars, used eminent domain powers to tear down entire neighborhoods of cheap, tenement-style housing and offer it to developers or replace it with public housing.Â

Most cities have a wing of a hospital, a sports stadium, a convention center or an urban university with new buildings from the 1950s and 60s, Holloway says. Fulton County Stadium in Atlanta, for example, was built atop a historically black neighborhood. “But you’re taking out neighborhoods where you have very high-density housing; now you’ve created this whole juggernaut process that’s tearing them out, replacing them with institutions. So, what happens to the people?” he says.

In Athens, the footprint of urban renewal can be seen around the city.

A working-class black neighborhood called The Bottom was torn down to make way for Bethel Midtown Village off College Avenue in the late 1960s. So was the white Lickskillet neighborhood near the Lyndon House Arts Center. A 1926 map identifies the Tin Top Alley neighborhood at the corner of Broad and Rocksprings, where Broadacres is now. Along Baxter Streetâ€”where today stand 1960s-era UGA dorms and the AHA’s Parkview Extension neighborhoodâ€”once stood a vocational school, a black-only Baptist school and shotgun houses for both black and white families, according to historic maps of the area.

UGA and downtown have expanded, so those public housing neighborhoods provide easy access to jobs, transportation and schools, says UGA professor Kim Skobba, who studies patterns of low-income families for the College of Family and Consumer Sciences. “When I look at where it’s located, it’s centrally located and it provides good access to transportation, jobs and schools,” she says. “So, you if you don’t have money, it’s good to live in places that are close to those thingsâ€¦ When I look at Athens public housing, I think it’s been placed in a way that I think sets low-income families up to meet their basic needs. I think the flip side of that is it’s very visible in Athens. I mean, it’s a reminder of the poverty here.”

Rocksprings Homes, at Baxter and Rocksprings, was built in 1955, Appleby says. Parkview Extension was built in 1959, and small neighborhoods called “scattered sites” were constructed in neighborhoods around the downtown business district in the early 1960s. The larger neighborhoods of Pauldoe, off Hawthorne Avenue, and Nellie B, near the Iron Triangle in East Athens, were built between 1967 and 1974. Towne View Place, off Oconee Street on Carr’s Hill, opened in 1990.

Dwain Chambers, a city councilman when Pauldoe was built, and later mayor says the community supported the AHA projects because of the need for affordable housing at the time.

“There was a decided need for it, as far as poverty was concerned,” he says. “The mayor at the time was authorized to apply for the projects. It was also at the beginning of (President Lyndon Johnson’s) war on poverty. The federal government had authorized units such as Jack R. Wells in an attempt to alleviate a need.”

While Athens avoided the large-scale warehousing of low-income families found in high-rises in major cities, some residents have still been shunted off to the side, Holloway says. The bypass around Athens hemmed in Nellie B., and while Pauldoe is within walking distance of two grocery stores, access to public transit is limited along Hawthorne Avenue.Â

“The idea is, you tear down the old stuff and what you put in place is designed to be attractive to middle-income folks,” Holloway says. “It’s part of the way to bring middle-income folks back into the city. You combine subsidized housing for a smallish group of people with market-rate, attractive housing.Â  The idea is that by breaking up these concentrations of poor people, you’re going to instill in them the social networks that will help them get out of poverty.”

The Pauldoe redevelopment is Athens’ first such project. AHA has submitted an application to the Georgia Department of Community Affairs, Appleby says. “They generally take about six months to decide who is getting a tax credit, and so hopefully we’ll hear something by the end of the year,” she says. Columbia Residential, the AHA and the Athens-Clarke government will also pick up part of the tab. Unlike most Hope VI projects, which end up with fewer subsidized units than the original complex, Pauldoe’s 125 families won’t be displaced. They’ll receive vouchers to rent housing on the private market during construction and have the right to move back to the new development.