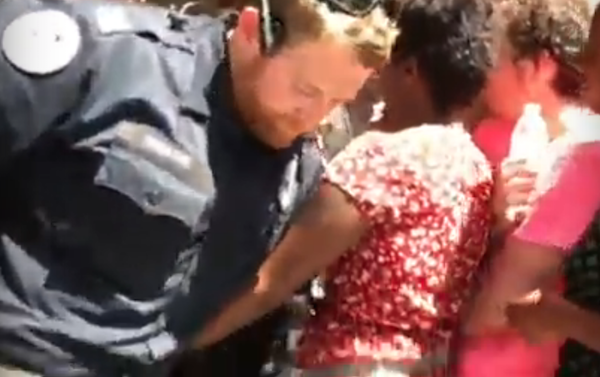 A video still shows UGA police moving students aside so they can close and lock the Administration Building doors.

Protestors who sought to enter the Administration Building on Thursday to seek a meeting with President Jere Morehead about Baldwin Hall and slavery were barred by police because they had been disruptive at a previous protest on Monday, according to a statement University of Georgia spokesman Greg Trevor released today.

All outdoor publicly accessible areas of the UGA campus are available for expressive activity by members of the University community, but expressive activity cannot substantially disrupt university operations, and demonstrations are not allowed in interior spaces such as academic and administrative buildings according to longstanding university policy.

This week, a group of individuals has repeatedly demanded entry to the Administration Building, claiming that their purpose is to request a meeting with the President. On Monday, members of the group were allowed entry to request a meeting, but then occupied the building for hours, harassed staff members attempting to do their jobs, flooded the switchboard with phone calls, and refused repeated requests to leave after the building had closed at day’s end.

Yesterday, members of the same group were granted a reservation for an event on the lawn in front of the Administration Building, but within an hour, they again moved to the Administration Building, attempting to forcibly enter the building and blocking the entrance. Given the disruptive nature of Monday’s behavior, and the fact that demonstrations are not allowed in building interiors, they were denied access.

The individuals responded by defacing the Administration Building with graffiti.