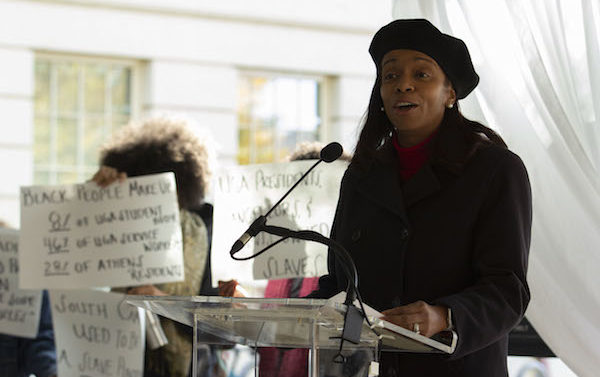 Protesters gather around UGA Vice Provost for Diversity and Inclusion Michelle Cook as she speaks at the Baldwin Hall memorial dedication in November.

“Many community members and students do not feel as though the University of Georgia adequately, publicly acknowledged its past entanglement with slavery, nor acknowledged the substantial contributions that enslaved peoples made towards the establishment and success of the University,” the SGA resolution states.

For senators like Jessica Douglas, who introduced the resolution, memorials at Baldwin Hall and Oconee Hill Cemetery are not enough.

“There’s this conception that because a memorial was placed at Baldwin Hall that we’ve sort of checked the box and that that’s all we really need to do. I want to continue the conversation and grappling with our legacy of slavery,” Douglas said.

The purchase of slave labor was mentioned at least 39 times in the records of the University’s Board of Trustees official minutes, the resolution states. Individuals enslaved by the university were forced to clean student apartments, whitewash buildings, maintenance, construction on the buildings and do odd jobs for faculty and students,  according to the resolution.

Despite this, the first plaque people see when they walk through the Arch is one that pays tribute to the Confederacy.

For that reason, Douglas and other SGA senators are suggesting the university construct a permanent monument on North Campus in collaboration with black community members to serve as a permanent reminder of slaves’ “sacrifices, struggles and lasting contributions to the university.”

Thirteen people who were enslaved at the university have been identified: Dick Cary, Davy Hull, Billy Hull, Sam [Harris] Watkins, Bishop Lucius Henry Holsey, Lewis “Old Tub” of the Christy family, Louis of the Demosthenian Literary Society, and Alfred, Caroline, Elvir, Hanson, Louisa and Sophia of the Church family, according to the resolution.

Cary and Watkins are two of the known “bell ringers” who rang the Chapel bell for religious services, emergencies and class changes. The resolution suggests that the bell be dedicated to Cary and Watkins.

“This needs to be something students know about when they ring the Chapel Bell and when they’re using that for pictures and tradition. We want to make sure that part of history is included at the Chapel Bell,” Douglas said.

The resolution also urges the university to be “a model within higher education for research and transparency” regarding the university’s past of slavery. A first step in doing that is to join the Universities Studying Slavery, a multi-institutional collaborative project based out of the University of Virginia that works to contribute research about universities’ involvement in slavery, which is another recommendation made in the resolution.

Moving forward, Douglas said their first step will be dedicating the Chapel Bell to Cary and Watkins while also having conversations with administrators and stakeholders about what needs to be done to hold accountability with the university’s history of slavery.

The SGA passed a similar resolution last year, but former President Cameron Keen vetoed it for “factual inconsistency,” Douglas said, because an organization initially believed to support it actually did not.

UPDATE: ACC Settles With Officer Who Hit Suspect With Car