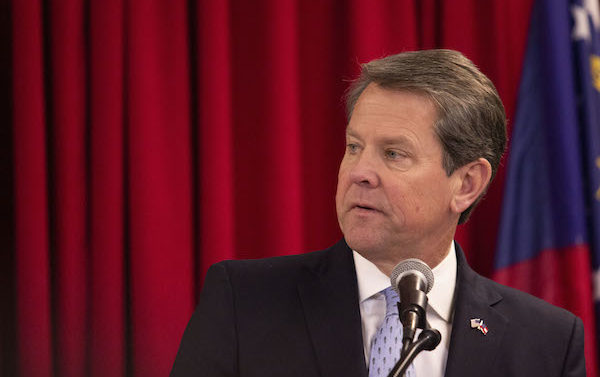 After a divisive campaign, Gov.-elect Brian Kemp called for unity Tuesday in his first major speech since winning a close and hard-fought election. Taking a different tone than what voters heard on the campaign trail, he appealed to state legislators to “put politics behind us.”

The speech at the University of Georgia’s Biennial Institute, a three-day training session for state legislators, came months after Kemp emerged from a bruising Republican primary in July and just weeks after he repeatedly called Democratic opponent Stacey Abrams a radical extremist.

“It’s time to shed the labels and work together as Georgians. It’s time to stand up for our communities, our families and our Georgia values,” Kemp said. “It’s time to protect the vulnerable. It’s time to do the right thing—even when no one is looking.”

“I am sick and tired of conservatives across the country running hateful campaigns and then expecting everyone to go back to business as usual after campaign season,” Shannon said, according to the Atlanta Journal-Constitution.

In his speech, Kemp repeated the promises he made in his campaign’s four-point plan: making Georgia the leading state in successful small businesses, reforming state government, strengthening rural Georgia and “putting Georgia first.” He particularly focused on boosting small businesses and rural Georgia—where he racked up huge margins in his narrow win over Abrams.

“Some [rural areas] continue to struggle, and in some areas, it feels like they’re still in the Great Recession,” Kemp said. “As governor, I will work to ensure that someone’s potential is not determined by their zip code or the county where they reside.”

Kemp said he wants to expand access to high-speed Internet, healthcare and education while also growing high paying jobs and investments in small businesses. He said he hopes to work with the House Rural Development Council Areas and economic development leaders with “a renewed focus on rural Georgia.”

Kemp also reiterated his campaign promise of increasing teacher pay and boosting rural hospital tax credits. The governor-elect, who takes office Jan. 14, then outlined the purpose of a new group in his administration, the Georgians First Committee, that will concentrate on reducing regulations and uplift small businesses.

Kemp avoided some controversial topics, such as gun rights and religious liberties, but didn’t shy away from talking about crime and illegal immigration.

“Georgia is a distribution hub for drug cartels,” he said. “These violent criminals use street gangs to traffic meth, illegal guns and fear.”

Kemp ended his speech by thanking his predecessors, Sonny Perdue (now the secretary of agriculture in the Trump Administration) and current Gov. Nathan Deal.

Kemp and other newly elected lawmakers will be sworn into office on Jan. 14.

Taste of India Is Open on the Eastside, Malinda’s Is Closed, and More Food News