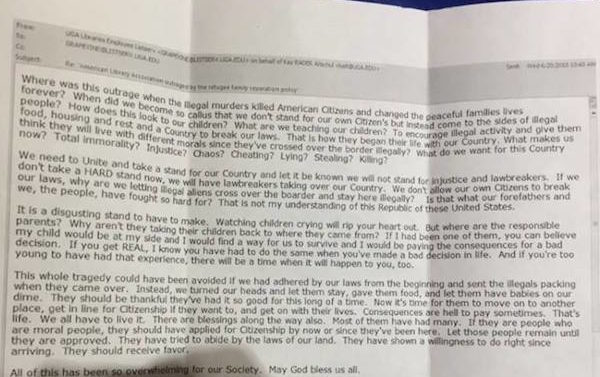 A University of Georgia library employee is under investigation by UGA’s Equal Opportunity Office after sending an email via the university-wide library email list stating her controversial views on immigration in June.

The Office of Multicultural Services and Programs and organizations such as the Hispanic Student Association, NAACP, Listo and MIXED recently received an anonymous letter that contained a copy of the email originally written by the library employee, Kay Altschul. The letter was sent during National Hispanic Heritage Month, which is Sept. 15–Oct. 15.

“To encourage illegal activity and give them food, house and rest and a Country to break our laws. That is how they began their life with our Country. What makes us think they will live with different morals since they’ve crossed over the border illegally? What do we want for this Country now? Total Immorality? Injustice? Chaos? Cheating? Lying? Stealing? Killing?,” the email sent on June 20 reads.

Altschul later states in the email that library employees needed to “Unite and take a stand for our Country and let it be know we will not stand for injustice and lawbreakers. If we don’t take a HARD stand now, we will have lawbreakers taking over our country.”

The message was referred to EOO to investigate and determine if the message violated the Non-Discrimination and Anti-Harassment Policy, said Greg Trevor, the executive director of media communications.

As the investigation is pending, Altschul continues to be employed by the university. She currently is an accounting assistant in the UGA Main Library. Trevor said Altschul has worked at the university for the past 14 years.

Violation of NADH could result in dismissal or other disciplinary action. While the investigation is ongoing, in a email to employees Friday, Toby Graham, the university’s head librarian and an associate provost, said it “was clearly out of compliance with our listerv policy.”

Trevor said the university will not disclose the specifics of the investigations at this time, including the date when the case was referred to EOO.

Altschul’s email was in response to a statement from American Library Association that was shared by another library employee on June 19 via the email list. The statement was in support of immigrant families and criticize the Trump Administration’s family separation policy. Several library employees told Flagpole they’d been instructed not to speak to reporters, so they couldn’t talk on the record, but they said receiving ALA and other professional bulletins is common.

When Flagpole contacted Altschul for comment, she referred questions to Trevor.

Trevor said UGA’s Student Affairs has met with student leaders who have expressed their concerns.

“We reaffirm our strong commitment to supporting a diverse, open and welcoming environment for our students, faculty and staff here at the University of Georgia,” Trevor said.

Several university students and community members have taken to social media to voice their disappointment or outrage over the email.

“I wish I could say I’m surprised about the racism and negativity that lies within the folds of my university, but I’m not. However, I refuse to let it impact me negatively. I’m transforming that energy into something positive by letting it motivate me and prove that we are above those statements,” said Crystal Gomez, a junior international affairs major and former political action chair of Hispanic Student Association, in a Facebook post.

Gomez told Flagpole she’s still trying to understand the situation, but has applied what she’s learning in her human migration politics course to the incident to figure out why Altschul would have this opinion.

“[Our class has] talked about how natives feel about immigrants coming into their country and how there’s this fear. Just studying the history of immigration in the United States… this isn’t new. What’s changing is the demographics of where these immigrants are coming from in each wave,” Gomez said.

Gomez said she knows the negative values the employee associated with immigrants in the email are false.

“Most of the Latinx student community at the university were raised by immigrants or are immigrants ourselves. The values instilled in us were noble, ethical and positive so I’m just going to use what my parents taught me growing up and come out of this…and try to be a better person out of it,” Gomez said.

On Friday, UGA Young Democrats released a statement demanding the university terminate Altschul condemn the “hatred” expressed in the email:

“The University of Georgia should not be complicit in hate, especially from its employees. Inaction from the University will demonstrate a lack of concern and a faulty commitment to the well being and success of underrepresented students, especially the Latinx students at UGA.”

Athens for Everyone also released a statement from Organization Coordinator Adam Lassila:

“This racist and xenophobic e-mail is awful, but unfortunately not very surprising at a time when hateful, scapegoating politics come from the White House, the Republican Party, and a lot of well-funded media outfits. It’s a positive step that this is being investigated by the Equal Opportunity Office, and we hope it results in action that recognizes the importance of creating an affirming community for immigrant and Latinx people at UGA, but the university needs to do much more to create a truly inclusive space for its students and employees of color. For example, it could help the economic situation of the many low-wage workers of color on whom the UGA’s operations depend by listening to the newly formed United Campus Workers of Georgia and creating an affordable, sliding-scale parking rate structure and by raising the minimum wage that it pays to all its employees and contractors to at least $15/hour.

“A4E is proud to stand with the immigrant community of Georgia in demanding that the University System of Georgia lift its ban on undocumented students at schools including UGA. Unlike the author of the hateful email, we recognize that the right to mobility, to live where one chooses, is a basic human right, and that immigrants make our community and our country stronger. We look forward to a day of real economic security for all, respect for the right of mobility, and an end to all deportations.”

Should I Reply to My Ex’s Angry Email?