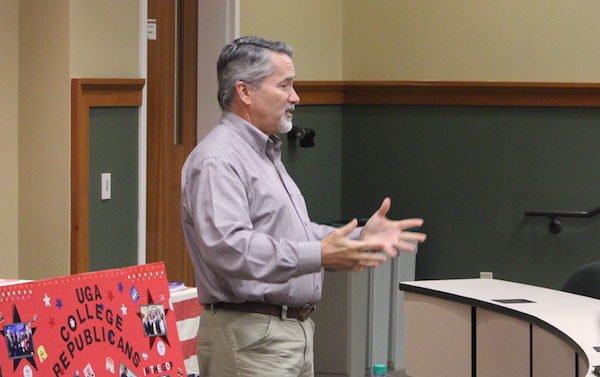 Hice, who represents most of Athens in Congress, predicted that the GOP is not done trying to overhaul the ACA after two failed attempts earlier this year. “This battle over health care is not over,” he said. “That’s the good news.”

Hice dove into the gridlock in Congress, particularly the Senate, saying the 60-vote filibuster rule in the Senate has caused a “backup of House bills waiting at the door of the Senate.” He also explained the reconciliation process, which only requires a simple majority to pass a budget bill. Republican Senators tried unsuccessfully to repeal the ACA using the process earlier this year.

When asked about future plans to attempt to repeal the ACA, Hice said he has heard talk of another reconciliation-based strategy next year, but did not know of any specifics.

Hice gave few details on the tax-reform legislation but praised it, saying it would simplify the tax code and spur business growth in the country. “About 90 percent of Americans will be able to do their taxes on a form the size of a postcard,” he said. “Folks, I’ve seen it; it’s on my desk back in D.C.”

Hice said he expects the bill to pass the Republican-controlled House, but was unsure of the bill’s future in the Senate.

Hice also wobbled on his stance regarding term limits. “I ran on term limits. I’m going to honor that,” he said. “But I will say, I’ve had a change of opinions.”

Hice argued that he has come to realize that if representatives are term-limited, “the lobbyists and the staff will run the show rather than the representative.”

According to Hice, Republicans typically term-limit themselves already, more so than Democrats. Roughly 40 percent of current House Republicans have been in office for five years or less. Hice again emphasized that he would remain true to his campaign promise. According to the Atlanta Journal-Constitution, Hice indicated he would likely limit himself to six terms, or 12 years, in the House. He’s currently serving his second term.

Hice also spoke confidently about “the good things that are happening” among lots of negative debate and events, including record stock markets and stronger borders.

“We have succeeded in removing 22 of 23 corrupt heads of government agencies,” he said. “Where is the news on that?”

Hice said the lone head yet to be removed is John Koskinen at the Internal Revenue Services, whom he called a scoundrel for the IRS targeting conservative groups a few years ago. (That story was later found to be false—the IRS scrutinized liberal political groups as well.)

While Hice was hosted by the UGA College Republicans, several self-identified Democrats also sat in on the event, who felt that this might be their only opportunity to meet with the him because he has never held a town hall in Athens during his time in office, despite requests from community groups. Hice relies mostly on tele-townhalls.

Some took the opportunity to confront Hice. Max Rogers, a student at UGA, attempted to challenge Hice on his stance that separation of church and state is a “false belief,”  in a short debate at the end of the event that did not really go anywhere.

Another attendee called out Hice on the ACA repeal and people dying because of lack of access to affordable health care. Hice responded by saying he was pro-life and focused on his opposition to Planned Parenthood, calling the organization an “abortion industry.” The attendee called Hice a liar, demanded a town hall in Athens and then stormed out of the room.

Hice—an anti-gay, anti-Muslim Southern Baptist pastor from Bethlehem, GA—was elected in 2014 and re-elected unopposed in 2016. He will face at least one Democratic challenger, music educator Chalice Montgomery, in 2018, and UGA philosophy professor Richard Winfield may run as well. Though liberal Athens-Clarke County makes up roughly a fifth of the 10th District, the rest of the district leans heavily in favor of conservatives.