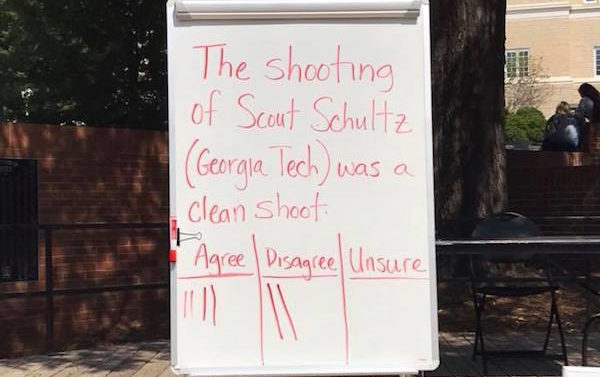 Hunter Hulsey was disgusted when he saw a sign with a poll in the Tate Student Center Plaza Wednesday asking if people agreed that the shooting of Scout Schultz at Georgia Tech was “a clean shoot.”

Schultz, a student at Georgia Tech, was shot and killed by police responding to a call of a suspicious person on campus. Schultz reportedly refused to comply with officer orders to drop a multitool he was wielding. It was later revealed Schultz placed the call that brought officers to the scene in what appears to be a suicide by police shooting.

“It pissed me off, so I took a picture,” Hulsey said.

The UGA student posted the picture on Facebook, with several people commenting on their repulsion.

“I think we can all agree that the question was inappropriate,” he said. “Using Scout’s death to justify a political opinion about guns or anything is disrespectful to the life they lived.”

Who exactly posted the question is still unclear. Hulsey said there were a couple of people gathered around two folding tables set up nearby, but he didn’t speak with them. The Scout Schultz question was just one whiteboard; another whiteboard next to it reportedly polled whether babies with Down Syndrome should be aborted.

Hulsey took the photo around 3 p.m. By 5 p.m., the display had been “voluntarily removed,” according to Greg Trevor, spokesperson for the university.

“Although the language on this sign was insensitive and offensive to many members of the university community, it is protected expression,” Trevor said in a statement.

“I have seen a lot about the sign being in poor taste, and then some turning it into a free speech issue,” said UGA student Alli Carton. “But to me, it’s not about free speech or where it was, it’s about that as a university, we should show support for Georgia Tech.”

Carton saw Hulsey’s photo on Facebook and decided to contact the Department of Student Affairs expressing her disappointment. Her roommate also posted the photo on the UGA subreddit, hoping to get more information about who may have set up the sign.

“Nothing about this question is useful to student life here and makes the tragic incident about politics and personal belief rather than the education that need to be in place in situations like this,” she wrote in an email to Student Affairs. “Mental health is a serious issue, which need to be addressed in trainings and teachings across the board. But as a University, the first step we must take is to stand with those who suffer.”

Carton said she has since had several people reach out to her asking how they can show support for Georgia Tech. She said she and a couple of her friends are organizing a show of support in the Tate Student Center Plaza on Wednesday from 4–7 p.m., right in the same spot the sign was.

“I know [the sign is] not what our university stands for, and that sign doesn’t show who UGA really is,” she said.