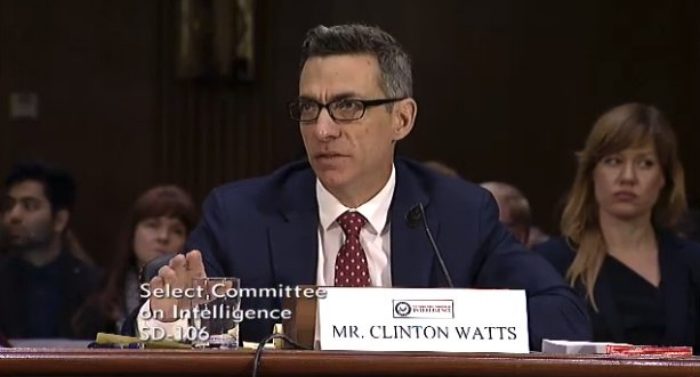 In this week’s episode, hosts Baynard Woods and Marc Steiner talk with writer and analyst Imara Jones about what’s next for health care and investigations into Russian involvement in the presidential election. Jones holds a degree from the London School of Economics and is currently developing a television news program aimed at progressive millennials of color.

Democracy in Crisis is a weekly podcast hosted by Woods and Marc Steiner, produced and engineered by Mark Gunnery for The Center for Emerging Media. Theme music by Ruby Fulton and the Rhymes with Orchestra.

The Senate Intelligence Committee questioned three experts on Russian active measures, or propaganda, campaigns Thursday morning. One of them, Clint Watts, of the Foreign Policy Research Institute and George Washington University’s Center for Cyber and Homeland Security, made it clear that the propaganda campaign was successful because of Trump’s use of similar tactics.

When asked why these cyber propaganda techniques work, Watts said “Because Trump embraces them.”

“Part of the reason active measures works is because they [Trump team] parrot the same line,” he said again.

Talking with reporters after the hearing, Watts was more specific, saying that a vast majority of Russian propaganda supported Trump—but because of his embrace of conspiracies, it is sometimes difficult to determine whether a particular line came from Trump or from the Russians.

“He actually repeats propaganda put out by RT or Russian sources and vice versa, they parrot him. ‘The election is rigged’ is a primary campaign put out by Russian propaganda up to the election,” Watts said. “‘The White House was tapped.’ Pick almost any of these stories where we have no proof for them and they show up back in Russian propaganda. It’s hard to distinguish sometimes did the Russians put it out first or did Trump say it and the Russians amplify it. That’s where you get into some trickery about it. That’s why you heard Vladimir Putin, he put out a statement today, he is right, he can say he didn’t influence the election because he’s not saying these things, our president is.”

Earlier in the morning, Putin called claims of such active measures “fictional, illusory and provocations, lies.”

Trump, Watts said, likely didn’t know when he was parroting a Russian line.

“I don’t think the president actually realizes what he is citing. You saw that with the wiretapping accusation over the last two to three weeks. He picks up on a conspiracy and he repeats it, and then we have the entire United States government pivoting to try and determine whether it’s fact or fiction. Whether he realizes it or not, he’s parroting Russian propaganda lines on a routine basis,” Watts said. “Somewhere in his circle of whoever is advising him in terms of media messages, at times they’re looking at Russian sources.”

Watts, who said he was certain he would be targeted by Russian hackers when he left the hearing, said the Intelligence Committee should follow the money, but they should also “follow the trail of dead Russians.”

“There have been more dead Russians in the past three months that are tied to this investigation,” he said. “They are dropping dead, even in Western countries.”

April Is Here to Fill You with FOMO Food Events