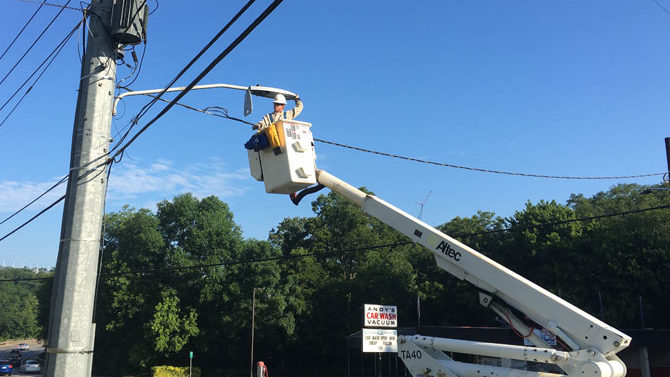 You may have noticed them downtown, or perhaps they’ve already reached your neighborhood. Crews contracted by Georgia Power are rapidly installing very bright but very efficient LEDs to replace older high-intensity discharge (HID) streetlights throughout the county. The new lights will cut streetlight energy use in half, but what seems like an environmental no-brainer may turn out to be somewhat controversial.

Traditional streetlights with HID lamps fire an electric arc inside a bulb of gas. In the old days the gas was mercury vapor, but in more recent years lamps contain either high-pressure sodium (recognizable for its yellow hue) or metal halide (bluish-white). These are the same sort of lamps used in gymnasiums and warehouses, and they’re known for relatively high efficiency and long life compared to incandescent lamps, but also poor light quality, bad cold-weather performance and slow startup.

Outdoor LED lighting has been around for quite a few years and in fact was more rapidly adopted than indoor LEDs. Still, when I did commercial energy audits four or five years ago, Georgia Power discouraged customers from requesting LED retrofits for their outdoor lighting accounts.

Now that they are replacing streetlights all over the state, I asked Georgia Power what’s changed. Key account manager Nathan Bartlett pointed out the major shifts in the market over recent years.

“LED technology has improved, with more lumens per watt being produced compared to earlier products,” he says. “Prices have decreased due to technology and manufacturing improvements and higher market volumes.” In the early days there were a lot of startup manufacturers making questionable products, but “reputable, longtime lighting manufacturers now dominate the market, and many of the early LED lighting companies have either gone out of business or been acquired.”

Athens-Clarke County traffic engineer Steve Decker says they improve road safety because the LED chips are more spread out compared to a hot spot in an HID lamp.

“Typically, driving through [HID] lighting, the driver has a second of blindness once passing the light, and their eyes must adjust. LED greatly reduces this, thus making it a safer experience.”

The LEDs that are now in Athens have a blue-rich color spectrum that mimics daylight, an additional safety benefit because it makes it easier for drivers to see people walking or biking at night. But this is also a cause for concern. The American Medical Association recently published guidance that cautions communities to avoid blue-rich LEDs for outdoor lighting. This is partly because it can be so bright that the glare outweighs the benefit of visual acuity and partly because blue-rich light at night disrupts our circadian rhythms, which leads to health problems ranging from impaired daytime function to obesity.

But let’s not panic yet. Andrew Saunders, the county’s environmental coordinator, says, “One of the advantages to LED street lighting is that the fixtures being offered by Georgia Power have adaptive controls whereby a manager can remotely change light intensity depending on the fixture’s location, time of day, time of year or other preferences. While the color of the light is closer to daylight, we can help to mitigate this by dimming them down in low-use hours. Georgia Power has indicated they would like to eventually turn these controls over to the customer after they finish piloting the technology. I’m excited to see what we can do with this opportunity.”

When asked about complaints from the public about increased light intensity, Bartlett says, “LED light distribution patterns provide for very precise illumination with little or no light pollution or light trespass. In cases where light trespass is a problem due to terrain, light placement, building location or other factors, Georgia Power utilizes shielding to control glare or light trespass in adjacent structures, including residences.”

Bartlett goes on to say that Georgia Power needs approval from the municipality to install shields, so if too much light is shining in your window, you’ll need to get in touch with ACC Transportation and Public Works.