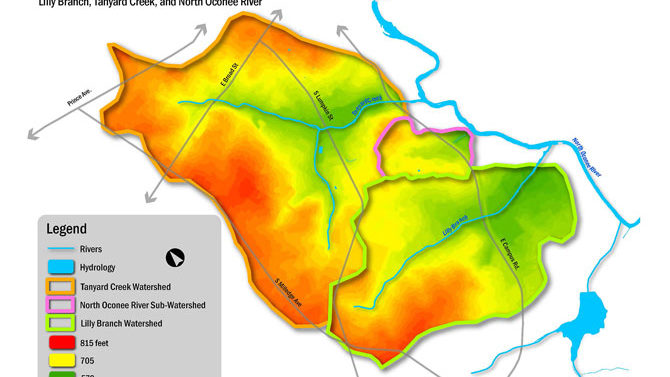 We have a complicated relationship with water. Athens and the University of Georgia are said to be located where they are because of the spring that gives Spring Street its name. We are situated between two rivers (the North and Middle Oconee) that today supply our entire city with fresh water. Yet we as a community have had a tendency to turn our backs on the rivers, and but for a restoration project conducted by UGA in 2008, the Founders’ Spring would have remained buried under an anonymous grassy strip of ground and been lost to history.

Of the 90,000 Bulldog fans who fill Sanford Stadium, I wonder if more than a handful are aware that a creek runs between—and underneath—the hedges. The UGA campus, in fact, has five watersheds on it: Tanyard Creek, Lilly Branch, Founders’ Spring, the Steam Plant Stream and Lake Herrick. A watershed is an area of land that is defined by higher elevations at its boundary (“shed” in this sense means “divide” rather than a small building), and where the water that falls on it collects in a common area of low elevation, such as a river or a lake.

In natural areas, these watersheds are easily recognizable as river valleys, for example. But in an urban environment like ours, waterways are often built over, hidden in a culvert or shunned behind a chain link fence or overgrown invasive plants. Not only that, but the storm sewer network drains into these urban creeks, collecting automotive fluids, poop, trash, sediment and everything else that runs off of our streets, parking lots, roofs and yards.

The Watershed UGA initiative aims to put a spotlight on these hidden waterways and encourage their restoration and protection. This town-gown project—spearheaded by the Odum School of Ecology and the UGA Office of Sustainability and funded in part by a grant from the Ray C. Anderson Foundation—seeks to raise awareness about stream restoration and engage UGA students and employees as well as the broader Athens community by virtually “daylighting” campus waterways.

One current focus is Lilly Branch, which begins as a natural stream near Barrow Elementary between East Rutherford and Woodrow streets, then runs through culverts under Foley Field and the College of Veterinary Medicine (there used to be a small lake there). The culvert continues under East Campus Road and across the front of the Joe Frank Harris Commons until it sees daylight again at the Lamar Dodd School of Art before it meets the North Oconee River.

As opposed to digging up culverts, virtual daylighting uses surface features and markers to educate people about the waterway beneath them. There is work in progress to build a dry stream bed in a wooded area west of Joe Frank Harris mimicking the flow of Lilly Branch in the culvert below. The next phase of this crowdfunded project (you can still contribute at dar.uga.edu/funder/campaigns/watershed-uga) will be to incorporate a rain garden to bioremediate runoff from the nearby parking lot.

To date, the most recent stream restoration on Lilly Branch was during construction of the new Lamar Dodd School of Art building in 2008. UGA Sustainability Director Kevin Kirsche, who at that time was the project manager for the art school construction, says that “while it was only a partial restoration that mostly involved clearing away the invasive species from that section of Lilly, we felt that once people could see the stream, they would value it.”

While there are not any actual daylighting projects planned at the moment, Kirsche is encouraged by the success of Watershed UGA to bring in additional grant funding to improve campus watersheds. “With help from the Riverview Foundation and Southern Company, plans are being developed to enhance Lake Herrick for experiential learning, research and limited recreation activities in the future.”

There are several Watershed UGA-hosted events planned for Earth Week, culminating on Saturday, Apr. 23 with the Middle Oconee River Cleanup Paddle at Big Dog’s on the River (11 a.m.–2 p.m.), followed by Farm to Tap at Terrapin (4:30 p.m.–7:30 p.m.). See sustainability.uga.edu/earthweek for the full schedule.