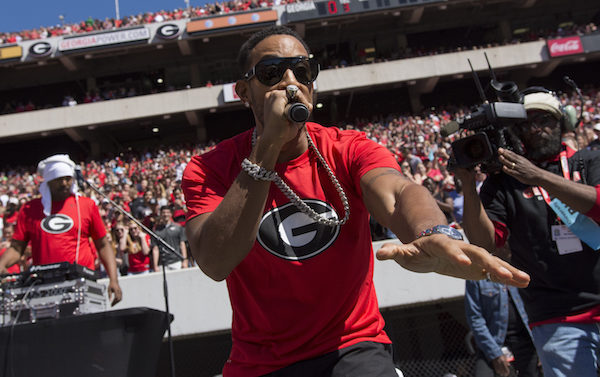 Did the UGA Athletic Association pay a ludicrous amount of money for a 15-minute concert before last Saturday’s G-Day game?

OK, sorry. Now that the bad puns are out of the way, the Macon Telegraph reports that the association paid Atlanta rapper Ludacris $65,000 to perform a medley of hits (including “Stand Up,” “What’s Your Fantasy” and, appropriately, “Money Maker”) before kickoff.

According to the paper, the Atlanta rapper called Athletic Director Greg McGarity and offered to perform after McGarity reversed course and announced that a planned pre-G-Day show was canceled because negotiations with various acts had fallen through.

In the rider, UGA also agreed to pay for dinner for 10 people and provide ground transportation, as well as snacks, T-shirts, vodka, cognac, wine, tequila, batteries and Trojan Magnum condoms in the dressing room.

Before the outraged commenting commences, I should note that the athletic association receives no tax money; it’s funded primarily through donations, ticket sales, TV revenue and merchandise licensing.

Here’s a video of the mini-concert posted by the Athens Banner-Herald: