Tommy Irvin always stood out in a crowd. The lanky farmer from Mt. Airy was a tall drink of water at 6 feet, 5 inches, and he augmented that height by wearing cowboy boots with his business suits. Irvin towered over nearly everyone he met.

He had been in declining health during his final years in office, dealing with the effects of diabetes and Parkinson’s disease. It did not surprise me when I heard that he died last week at the age of 88.

“With the passing of Tommy Irvin, Georgia has lost one of its greatest public servants,” said DuBose Porter, a former legislator who’s now the state Democratic Party chairman. “Tommy knew and understood more about rural Georgia and farming families than just about anyone else. We’ve lost a good man, and we’ve lost a good Democrat.” 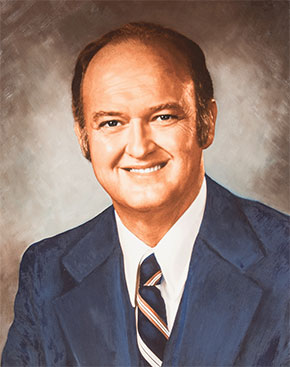 Irvin was a lifelong Democrat who never switched parties and fought off every attempt by Republicans to oust him. In his last election in 2006, he took 56 percent of the vote and won his 10th consecutive term over Gary Black, the current agriculture commissioner.

The son of a tenant farmer, Irvin was born in 1929 in Lula. He attended public schools in White County, but there was no diploma, and Irvin did not go on to college. When his father died, he had to quit school to take care of his family. He got his start in politics during the segregation era of the mid-1950s, when he was elected to the Habersham County school board and the state House of Representatives. (He served in both bodies at the same time.)

Irvin was part of a prominent group of Democrats who came of age in the 1960s, including Tom Murphy, the state House speaker for 29 years, and Jimmy Carter, who went on to become president. But those old Democrats slowly moved on or died out as state government shifted to Republican control. “I haven’t changed my values,” he once said. “I see myself as one of the old-line, conservative Democrats, of which there are very few left.”

His early political career was entwined with that of another North Georgian, Zell Miller. Irvin helped Miller win his first race for the state Senate in 1960. Several years later, after Irvin left the legislature to become executive secretary to Gov. Lester Maddox, he brought Miller into the Maddox administration.

“I like to say I got Zell his first job in state government,” Irvin said. “Zell ran for Congress twice; Phil Landrum beat him both times. I called Zell up, told him I had a job I’d like to offer. I remember when I brought him down here, I kept bringing Zell around to the governor’s office as often as I could and introduced him to Lester so he’d know who he was.”

Miller would go on to become lieutenant governor, governor, and then U.S. senator.

Irvin was first appointed agriculture commissioner by Maddox in 1969 as a replacement for Phil Campbell, who had taken a position in the Richard Nixon administration. He stepped down in 2010 when he decided not to run for another term. He was one of those politicians who truly seemed to enjoy the political life, even with a job that lasted 42 years.

“You know, I love my work,” he said shortly before starting his last term as commissioner. “I have seen, in my experience, a lot of people, a lot of important people in similar situations, start coasting. I’m not gonna do that. I’m gonna be a player.”

Irvin was a player in state politics for a long time.