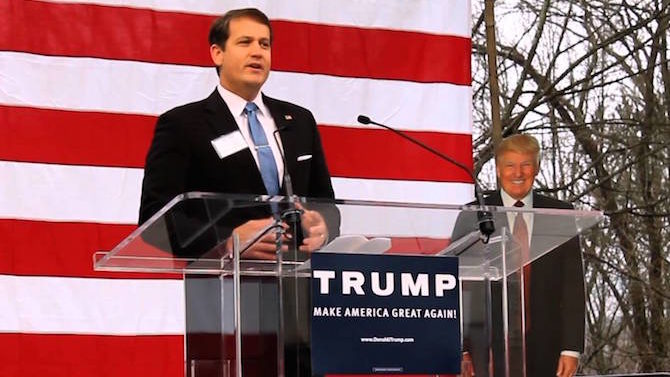 For those Georgia voters who couldn’t get enough of Donald Trump in last year’s election, fear not. We have a local version of The Donald now running for governor: state Sen. Michael Williams (R-Cumming), who hasn’t served quite two terms in the legislature.

Williams was the first Georgia lawmaker to endorse Trump in the presidential election, and his campaign for governor is modeled on how Trump ran for office. He even has a campaign manager, Seth Weathers, who was briefly involved in Trump’s Georgia campaign organization.

Like Trump, Williams is trashing his opponents both online and in public, making outrageous accusations that aren’t supported by such things as facts and data. His prime target is Lt. Gov. Casey Cagle, the choice of many in the capitol establishment to be the successor to current Gov. Nathan Deal.

At the state GOP convention in June, Williams claimed that Cagle and the Senate leadership offered him the chairmanship of the powerful Senate Appropriations Committee if he would not run for governor. He repeated that charge last Thursday at a capitol press conference: “There’s a reason that Casey Cagle’s team wanted me out of this race, to the point where they offered me a Senate chairmanship for my support.”

In the face of numerous questions from reporters, Williams would not produce any evidence at either event to back up his sensational charges. That’s probably because his accusations aren’t true. The charges have been denied by everyone who would have been in a position to offer him a chairmanship, and it’s simply implausible that the Senate leadership would have made such a move.

Like Trump, Williams sees himself as a martyr to political correctness, a valiant fighter that the “establishment” wants to bring down because of his opposition to crony capitalism. “I know that in less time than it takes me to tie my shoes, Casey and his gang of bullies will begin to further assault me and my family,” Williams said last week. “We are ready. You cannot break us… We will be here. Your days are numbered.”

Like Trump, Williams tweets a never-ending stream of attacks on liberals, the party establishment and undocumented immigrants. He appears to hate the establishment even more than he hates immigrants. I guess it won’t be long before he’s referring to the lieutenant governor as “Crooked Casey” and “Low-energy Cagle.” Many of Williams’ tweets include pleas for campaign contributions, promising that if people will just give him money, “we can beat the establishment.”

That message doesn’t appear to be resonating with Republicans. When the campaign disclosure reports for the period ending June 30 were released last week, Williams wasn’t even close to his opponents in raising money. Cagle reported nearly $2.7 million in contributions, Secretary of State Brian Kemp reported $1.7 million, and even an obscure state senator named Hunter Hill brought in more than $1 million.  Democrats Stacey Abrams and Stacey Evans each raised more than $400,000. Williams’ take was a measly $51,404 in outside contributions.

Like Trump, Williams is now in a position to talk about how he can use his own money to run for office so that the “establishment” can’t buy him. He indicated on his disclosure report that he’s loaned his campaign $1 million in personal funds. Thus, he’s kicking in $20 out of his own pocket for every dollar he brings in.

When a candidate has that much trouble raising money, attacks his own party, and makes thunderous accusations that he knows aren’t true, the normal rules of politics would tell you that the candidate is on track to lose the race. However, Trump’s presidential campaign showed us that the old political rules no longer apply. Williams thinks he can do at the state level what Trump did at the national level. Will the voters agree with him?