The Art of the Kneel 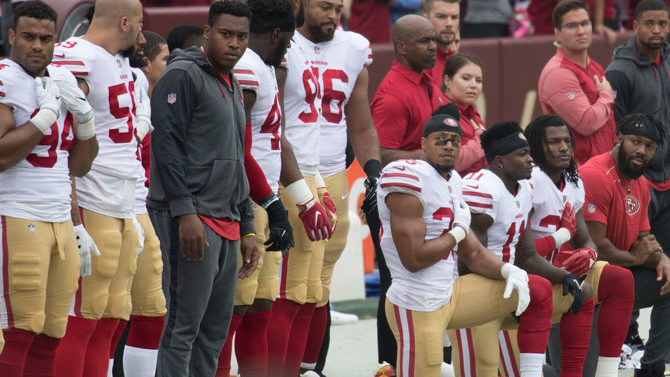 “Congress shall make no law respecting an establishment of religion, or prohibiting the free exercise thereof; or abridging the freedom of speech, or of the press; or the right of the people peaceably to assemble, and to petition the Government for a redress of grievances.” – Amendment I, Constitution of the United States of America (Ratified Dec. 15, 1791)

“You better go home and read your Constitution, buddy!” – Secretary of State Alexander Haig to Secretary of Defense Casper Weinberger, explaining why he was “in charge” until Vice President George H. W. Bush arrived at the White House in the immediate aftermath of the attempted assassination of President Ronald Reagan on March 30, 1981.

As it turned out, that ol’ snuggle bunny Al Haig was wrong about where he stood in the line of presidential succession—which was fourth behind Bush, rather than second—as well as the authority for that succession, which was actually established by an act of Congress in 1947. Even so, “Read your Constitution, buddy,” is always pretty sound advice in any situation, and never more applicable than in the current uproar over the rights of NFL players to kneel during the playing of the national anthem in protest of police violence against black citizens.

Although the Second Amendment may be giving it a run for its money these days, the Ol’ Bloviator would venture that the most commonly misappropriated amendment to our Constitution is the first. A great deal of this is attributable to the deeply ingrained embrace of “free speech,” in principle if not always in practice, as a fundamental component of the American Way of Life.

The First Amendment’s reference to “freedom of speech” has been interpreted expansively enough to include many forms of individual expression, from music to the visual arts to choice of apparel to bumper stickers. Likewise, “Congress shall make no law… abridging freedom of speech” has been extended to cover state and local as well as federal laws and policy, and federal practices requiring or sanctioning suppression of free expression. Pervasive governmental involvement in so many aspects of national life has taken First Amendment protection into areas where few could have imagined they would apply. All of this being said, however, the courts have largely required that some level of government involvement in the restriction of free expression be established before First Amendment protections are operative.

Ironically, the gratuitous self-insertion of the Great Orange Blusterbag into this controversy may have inadvertently rendered the First Amendment more relevant here than it would have been otherwise. While it guarantees his right to criticize the kneelers as a private citizen, there is court precedent to suggest that, as an agent of the federal government, he is not free to use his bully pulpit to encourage Americans to boycott the NFL in order to actively coerce owners into ixnaying the players’ protests. Still, we might rightly ask whether filing another legal action against a man who pays them no more mind than his debts or contracts is akin to trying to calm Kilauea by tee-teeing on it.

If legal determinations are to be factor here, the O.B. can’t see the dispute coming down to anything other than the right of an employer to restrict the behavior of an employee while he or she is on the job. There are laws in many states that prohibit bosses from penalizing workers for their political activities outside the workplace, and there are laws that prohibit discrimination within it based on race, sex or sexual orientation. So far as the O.B. knows—which, granted, sometimes ain’t all that far—no employer can be required to tolerate on-the-job behavior by an employee that he or she deems detrimental to the employer’s economic interest. Staffers may well exercise their freedom as individuals to raise controversial, divisive political issues while engaged with clients and customers, but they have no legitimate expectation that the boss must tolerate such behavior.

What it boils down to is that we as a people pride ourselves in maintaining legal protections for free speech in certain forms and within certain contexts, and pay unceasing homage to it in principle. Yet, no less than most human societies, ours readily relies on the forces of popular opinion and the marketplace to discourage or punish speech that is seen as unsettling, embarrassing, divisive or otherwise inimical to the dominant interests of the day.

There is no denying the racial factors that drive and complicate this particular controversy. Some 70 percent of NFL players are black, while 80 percent of the fans in the stands are white. Increasingly stratospheric ticket prices simply exacerbate this disparity. The heaviest concentration of household incomes across the NFL fan base falls within the range of $75,000–$100,000, meaning even the bottom tier of this demographic stands $35,000 north of median household income for blacks as of 2017. Meanwhile, some 70 percent of the overall viewing audience is also white. By no means all of the roughly 65 percent of whites who seem to disapprove of the kneeling personally deny the legitimacy or sincerity of the players’ concerns, but by stressing the anti-American implications of what the kneeling “sons of bitches” were doing, His Evil Orangeness effectively piled a lack of patriotism on top of the racial antipathy already harbored by many whites, while casting whites more sympathetic to the player’s objectives as America-haters as well. The impact of his onslaught registers in survey data showing the share of respondents with favorable attitudes toward the NFL falling from an already frail 30 percent to 17 percent during  DT’s weeklong Twitter rampage on the subject last September; his calculated outrage helping, as one survey firm noted, to render the NFL one of the “most divisive brands” out there. Needless to say, if you are heavily invested financially in such a brand, this is seldom good news, and, in this case, it likely means that no intricate algorithmic calculation will be needed to convince team owners and league officials that the best bet for their pocketbooks lies in moving to pacify by far the largest and most affluent segment of their unevenly divided fan base.

Cracking down on protests by black players obviously promises less overall revenue lost to fan boycotts or other collective attempts to cut into their bottom line than vice-versa. A player strike or coordinated refusal to report for training camp in July might well counter this strategy, but given the racial and ideological pressure cooker in which this conflict is playing out, the owners might well double down, sensing that folding in the face of a raise by the players would only intensify the backlash from white fans, not to mention a certain self-serving politician as well.

If the message here is that, as a practical matter, protecting free speech can be costly to the owners, what of the free speakers themselves? Speaking out against injustice has cost  thousands of lesser-known Americans their lives, families and livelihoods, and even more celebrated voices of dissent have not escaped unscathed. Witness here John Carlos and Tommie Lee Smith, who, in raising a fist in the “Black Power” salute and bowing their heads during the national anthem at the Olympic awards ceremonies in 1968, not only forfeited their medals but left themselves severely restricted in their career opportunities thereafter. Ditto the Dixie Chicks, who were riding the momentum of a recent multi-platinum album and, in a bitter irony, in the process of launching their “Top of the World International Tour” in 2003, when singer Natalie Maines declared the group’s disgust with their fellow Texan in the White House for his hokey invasion of Iraq.

As might have been expected from not only fans but performers and executives of the most indisputably most conservative and hawkish sector of the American musical scene, the country music establishment and the great majority of the field’s leading artists reacted as if Ms. Maines had pooted at Minnie Pearl’s funeral, and the high-flying trio summarily nose-dived directly into Lake Pariah, their extrication from which remains incomplete even 15 years later.

None of this is to suggest that players who kneel in protest during the national anthem are not fully aware that, historically, there have been significant costs attached to such actions or that they are not fully prepared to absorb them. The O.B. will readily admit that his visceral reaction to the way they are making their statements is decidedly negative, even though he recognizes that the necessity for such a statement is urgent. He concedes that even a more subtle or individualized gesture is likely to invite an acrimonious reaction, as in the shallow, malevolent Laura Ingraham’s “shut up and dribble” advisory after LeBron James called some of the Cheeto-in-Chief’s language “laughable and scary.”

The Ol’ Bloviator wishes he could see an outcome here based a more constructive and sensitive appreciation of opposing points of view and a recognition that humane values should always count for more than raw emotions. Sadly, he can hardly imagine a time in our nation’s history less propitious for such an eventuality. Hence, he humbly suggests that if and when an accommodation is announced, the appropriate musical accompaniment will not be Faith Hill or Whitney Houston’s soaring rendition of “The Star Spangled Banner,” but Cyndi Lauper belting out “Money Changes Everything.”