History of the South, Abbreviated: The Ol’ Bloviator Boils It Down 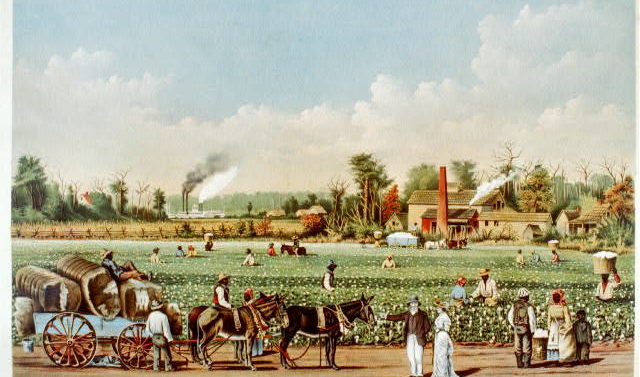 Some of the Ol’ Bloviator’s friends in Germany asked him to boil the essence of Southern history and identity down to the tidy sum of 1,600 words, for the benefit of public school teachers who will be devoting an instructional unit to the American South. This exercise in hypercompression ( some might call it “bliviting”) took the O.B. a lot longer than he expected and hammered home Kenny Rogers’ wisdom about the importance of knowing “what to keep, and what to throw away.” Needless to say, the O.B. had to do a great deal of throwing away, so please keep that in mind if you are troubled by what you don’t read below. If that doesn’t work, by all means, take your own shot at being a Southern-fried oracle in 1,600 words.

In the United States, the “South” can be defined in many ways, including geography (roughly the same latitude as Spain, Portugal and Southern Italy), relatively warm, humid climate (average high temp above 22 C.), racial population mix (black to white ratio: South 30 percent; United States 18 percent) and strong religious commitment (highest church attendance rates in the U.S.). The most unifying characteristic of the South, however, remains its history, and the most important factors in that history are African slavery and the Civil War, 1861–1865, to which slavery was the major contributing cause. In this sense, the 11 states that went to war in defense of slavery present the most cohesive representation of the South.

Slavery flourished first in Virginia in response to the labor requirements of growing tobacco, the colony’s principal crop, and spread to the rice plantations farther down the Atlantic Coast as well as the sugar plantations of Louisiana. Slaves were also employed in growing cotton, which was first confined to the warm, moist coastal areas of Georgia and the Carolinas suitable for growing the finer, long-stranded variety whose fibers could be separated from the seeds by hand. Even with slaves doing the work, this was still a slow and arduous process until 1793, when, in the face of mounting demand from British textile manufacturers, inventor Eli Whitney perfected his cotton “engine” or “gin,” a machine that could efficiently extract the seeds from the fibers, even in hardier, shorter-stranded cotton that could be grown across much of the South. In response to Whitney’s invention, Southern cotton production exploded from 3,000 bales (227 kg each) in 1790 to the more than 3.8 million bales that by 1860 accounted for 58 percent of the total value of U.S. exports and 75 percent of the world’s cotton supply. High demand for cotton meant higher slave prices as well, and by 1860, with slaves accounting for roughly two-thirds of their wealth, Southern planters were among the richest people not only in the United States, but in the entire world.

With mounting national opposition to slavery threatening their wealth and status by the end of the 1850s, slaveholders came increasingly to advocate withdrawal from the federal union, even if it meant taking up arms against it. Barely one-third of Southern white families owned slaves in 1861, but the ensuing death and destruction of the Civil War brought economic devastation to the entire South. Destroying slavery also meant destroying the $4 billion value attached to the slave population, leaving the region sorely lacking in the capital needed not only to rebuild Southern agriculture but to finance the South’s industrial development, which by the end of the Civil War lagged even further behind that of the Northern states than it had at the beginning. The lack of capital or skilled labor condemned the South to a pattern of slow industrial growth dominated by manufacturers looking to take advantage of its vast pool of cheap, unskilled labor.

Meanwhile, with actual cash so hard to come by, Southern cotton production slipped into a system in which larger landholdings were divided into separate plots, each farmed by a family of “sharecroppers.” Instead of wages, sharecroppers received a designated share of the proceeds from the crops they produced after charges for the supplies and food, advanced to them on credit at extremely high interest rates, had been deducted. In combination with a general decline in cotton prices, this very inefficient and often exploitive way of farming caused millions of Southerners, black and white, to sink deeper and deeper into unrelenting debt and poverty. It was small wonder that per capita income in the South was barely half the national average in 1900 or that malnutrition and chronic disease were also widespread.

Most white Southerners blamed the Republican Party for the Civil War and the destruction of slavery and fiercely resisted its efforts to assist newly freed blacks. The overthrow of the last Republican state governments in 1877 not only marked the end of the “Reconstruction” era, but set the stage for the South to become a fortress of Democratic Party support for more than three-quarters of a century. With the region’s industrial and agricultural economies heavily dependent on cheap and easily controlled labor, restoring white supremacy over the former slaves became a priority. The resulting system of economic and social repression included not only rigid racial segregation, but a variety of discriminatory restrictions that prevented the great majority of Southern blacks and quite a few poorer whites from continuing to vote.

These tightly interconnected economic, racial and political arrangements survived largely intact until the Great Depression of the 1930s brought federal incentives to reduce farm production, which, in turn, led to massive evictions of sharecroppers. World War II drew even more Southerners away from farming and spurred the development of a mechanical cotton picker that reduced the need for farm labor even further. Rapidly declining agricultural employment dictated a much more aggressive campaign to bring industry to the South, and the sharp wartime increase in personal income set the stage for an influx of faster-growing, sometimes better-paying manufacturers attracted by an expanding base of more affluent metropolitan consumers.

Meanwhile, black veterans returning from World War II after fighting for democracy overseas were determined to have it for themselves back home. They played a key role in rallying support for the National Association for the Advancement of Colored People (NAACP) and its push for racial equality that led the U.S Supreme Court to outlaw public school segregation in 1954 (Brown v. Board of Education). The ensuing campaign of public protests and civil disobedience headed by the Rev. Martin Luther King Jr., generated the pressures necessary to prompt Congress, with considerable prodding by President Lyndon B. Johnson, to pass legislation prohibiting racial discrimination by employers or public businesses and aggressively guaranteeing the voting rights of Southern blacks. The Voting Rights Act of 1965 led to widespread black voting (for the Democratic Party), and the South soon led the nation in the number of blacks holding elected office. On the other hand, after liberal northern Democrats joined President Johnson in calling for the new civil rights measures, a majority of white Southerners abruptly switched their allegiance to the more conservative Republican Party, although in recent elections Democratic presidential candidates have regained strength in states like Virginia and Florida, which have attracted many new residents from outside the region.

Some parts of the South have enjoyed remarkable economic progress since the 1960s, as rising global competition encouraged more Northern industrialists to move their production facilities to the South, which still offered the lower labor and other operating costs that also spurred investments by a number of international manufacturers, including German automakers BMW and Mercedes. The South now boasts 20 metropolitan areas with populations of 1 million or more. Yet there are many pockets of enduring poverty, especially in rural areas with heavily black populations. Eight of the 10 poorest states are in the South, which also lags behind most of the rest of the U.S. in categories like support for public education and public health and leads in the incidence of health problems like obesity, diabetes and susceptibility to strokes and heart disease.

As poor as it might be in certain respects, the South is undeniably rich in culture. Although its original white settlers came from Great Britain and Western Europe, its cultural heritage was also shaped by Native Americans and enslaved Africans, who brought with them a rich bounty of foods, spices, and cooking techniques. The South’s famed barbecue derives from “barbacoa,” a technique for slow-cooking and roasting meat likely adopted from the native population of the Caribbean and West Indies by slaves and the whites who deposited them there before they were imported to the Southern colonies. Slaves were largely responsible for the pepper and vinegar sauces spread across the barbecued meat, although later German immigrants to the Carolinas insisted on a mustard-based sauce. Finally, “grits” became a fundamental staple of the Southern diet after Native Americans were observed soaking ground corn in a mixture of water and ashes prior to boiling in order to unlock its full nutrient content.

No element of the South’s culture has had more influence on the culture of the U.S. and other nations than its music. While the ballads and fiddle tunes brought by British settlers provided the foundation for what would become country music, the work songs and field hollers that were a vital part of the slaves’ African heritage formed the basis of the blues. These musical forms did not always respect the South’s racial divisions. There was more interaction than many realized as both the blues and country music grew more commercialized and, as members of both races left the farm in droves, more urbanized as well. When local radio stations and recording studios in cities like Memphis and New Orleans began to feature the work of both black and white performers after World War II, the closer contact and familiarity bred the revolutionary new sound that would become “rock ‘n roll.” Elvis Presley quickly won an enormous youthful following as a white singer who sounded “black,” but if he succeeded by borrowing heavily from black stylings, he also helped to open the door to white audiences much wider for a host of black performers ranging from Little Richard to Chuck Berry.

If the South gave America its most characteristic music, its writers also contributed some of its greatest literature. The region’s striking racial and economic disparities and injustices and its stark extremes of religious piety and violent cruelty helped to fuel the creative instincts of a host of brilliant writers, white and black, from William Faulkner, Thomas Wolfe, and Carson McCullers to Langston Hughes, Richard Wright, and Alice Walker. In the end, however, like the Southern people themselves, more than anything, the works of these writers reveal a common struggle with the enduring presence of a past that, for them, as Faulkner writes, is “never dead” and “not even past.”