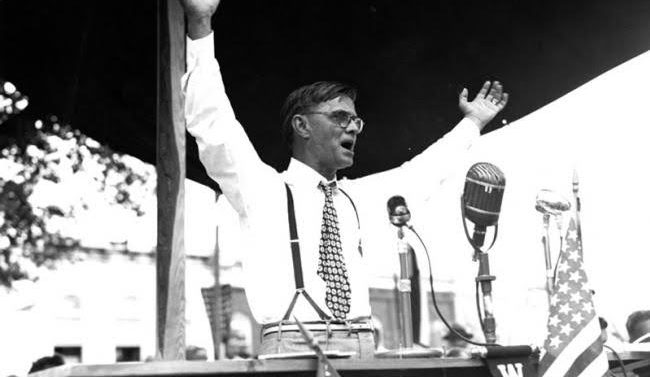 The Old Bloviator has long held that that Southern history holds the keys to unlocking practically any contemporary conundrum, including, in this case, explaining how and why someone so thoroughly dedicated to being utterly repugnant can actually be the front-runner for the Republican nomination. In fact, this one is something of a pushover in that Trump could well have stolen his playbook from no less towering a presence in the storied annals of Georgia politics than Eugene Talmadge, who ran for governor five times, won four times but expired before taking office for the final term. From the governor’s office, he ruled Georgia with an iron, albeit reckless, hand, usurping the prerogatives of the Comptroller General or the Public Service Commission whenever it suited his purpose, prompting one historian to denounce him as “a dictator, a demagogue and a threat to the tranquility of the state.” (Sound familiar, DT?)

Not for nothing was ol’ Gene known as the “Wild Man from Sugar Creek,” a stream which actually trickled through his Telfair County estate, for his campaigns featured all manner of histrionics and audacity, such as showing up for a rally driving a set of oxen after strapping on his trademark red suspenders and sometimes drenching himself in corn whiskey. In a typical stump speech carefully choreographed to seem impromptu, he ridiculed his political opponents and critics, among whom he listed both “them lying Atlanta newspapers” and his favorite punching bag, the racially tolerant scalawag Atlanta Constitution columnist “Rastus,” [a.k.a.] Ralph, McGill.

Talmadge’s behavior, like that of such counterparts as Jeff Davis in Arkansas and Ellison D. “Colton Ed” Smith in South Carolina, was easily written off to the apparently endemic ignorance and depravity of Southern political leaders, not to mention that of those who kept electing them, but there were sound structural incentives that encouraged and reinforced such contrived rascality. Not the least of these was the “white primary,” a device implemented as a sort of final filter meant to screen out any blacks who had somehow breached a veritable Siegfried Line of barriers to voting—from the poll tax, to the literacy test, to property requirements—and therefore remained eligible to exercise the franchise on election day. Determined that even this tiny minority of blacks would not have their say at the ballot box, state Democratic parties across the South had simply declared themselves private organizations, which allowed them to forbid black participation in their nominating primaries for state offices.

Though this move may have seemed unnecessary, it was actually critical precisely because the aforementioned artifices, all of them keyed in one way or another to disfranchising the economically and educationally disadvantaged, had all but eliminated the prospect of significant voting by blacks and low-income whites who had a history of supporting Republican, Populist, or any other Independent candidates.

With a Democratic triumph in the general election thus now a foregone conclusion, the Democratic primary was now the only meaningful game in town for statewide political aspirants (and just to make sure it served its purpose, anyone who ran in the white primary was required to foreswear any subsequent candidacy as a Republican or Independent.) Since the only realistic path to state office led straight through the Democratic primary, it frequently attracted aspirants in large numbers. With the overwhelming majority of those likely to really see things differently now on the outside looking in, differences among the candidates on concrete issues were infrequent, to say the least.

The challenge of a large, relatively homogeneous group of competitors encouraged efforts to separate one’s self apart as vividly, even histrionically, as possible, while lumping all the rivals together. In an especially crowded race for governor in 1932, Gene Talmadge simply dismissed his faceless opponents as “the baseball nine.” Likewise, the virtual absence of fundamental differences on issues encouraged both personal attacks on one’s rivals and tirades against a variety of sinister, impersonal and frequently contrived forces. Over in Mississippi, for example, two-term governor Theodore G. Bilbo, who had recently called one of the state’s sitting U.S. senators “a vicious, malicious, pusillanimous, cold-blooded, premeditated, plain, ordinary liar,” soon won a Senate seat himself, vowing to wreak vengeance on “farmer murderers, corrupters of Southern womanhood” and “skunks who steal Gideon’s’ Bibles from hotel rooms.”

Needless to say, incumbents with established bases of support were likely to benefit from a crowded field of candidates, just as fields were more likely to be crowded when, as in 1932 in Georgia, there was no incumbent in the race, and so it is in a 2016 Republican primary lineup, which includes not only the outrageous Mr. T, but 16 would-be rivals, the closest running a mere 15 points behind him in current polls. Though he is actually a better showman than P. T. Barnum, Mr. Trump clearly subscribes to the old Barnum dictum that “there’s no such thing as bad publicity.”

Trump’s most recent ventures into over-the-top audacity appear to have cost him an event or broadcast contract or appearance opportunity here and there, but what the heck does that mean to a guy worth $10 billion? Not only do these intended rebukes simply bounce off his Kevlar-encased ego, but they afford further opportunities to tout himself as the only red-blooded, non-wuss GOP option, in much the way the disapproval of  the “better element” served as badges of distinction for the Talmadges and Bilbos. Meanwhile, his tremulous opponents agonize over jeopardizing their conservative creds by venturing out of the far-right lane just long enough to chide him for being too forthright and visceral in expressing and defending views on immigration, health care, women’s issues, etc. that generally differ little from their own. Thus, the currently trumped non-Trumps sit gaping as he careens all over the road, mocking party icon John McCain, ridiculing Rand Paul and flat-out dissing both Jeb and his brother.

Surely the O.B. has told you enough about Gene Talmadge by now that you could easily see him giving out Ralph McGill’s phone number, much as Trump did with poor old Lindsay Graham. Although Trump’s refusal to foreswear an independent candidacy would have gotten him booted out of the white primary, neither his individual or cumulative excesses to date have sufficed to send him tumbling down amongst his competitors who, at this point, are left to paddle back and forth in a tepid puddle of “meh,” awaiting what they keep telling themselves is Donny’s inevitable downfall.

Though Trump hardly qualifies as a much of a “populist,” he seems to have tapped, however crudely and tastelessly, into a rich vein of throbbing discontent, not all of it necessarily partisan, with the rigid code of political correctness that frequently seems to govern public action and thought these days. This is to say that some, perhaps many, of those who disagree with the substance of what Trump actually says nonetheless find it hard not to admire the exuberantly unhesitant manner in which he says it. In fact, as it was with Ol’ Gene, his most endearing trait to many supporters may well be that “he just don’t give a damn!”

In the practical political sense, however, the trouble with The Donald is that he is not exactly overstocked with such traits. Trustworthiness? Likability? The Common Touch?  “Nope,” 3X. Ironically, rather than taking solace in the fact that the very same deficits might be cited in the lurking, looming, inevitable, nine-lived Hillary, Republican leaders must find it more than maddening that, from a field of nearly two “baseball nines,” their party has yet to come up with any more viable an opponent than someone whose every attempt to capitalize on Hillary’s negatives is all but certain simply to call further attention to his own.

Ride Free Buses to Brunch and the Farmers Market This Weekend