Electile Dysfunction: Did You Really Think They Had a Chance? 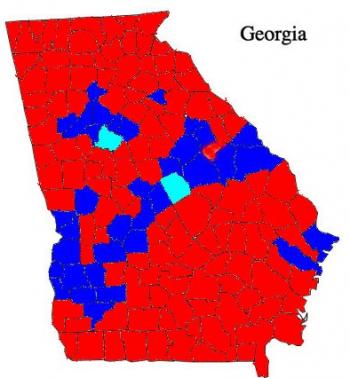 Now that, for the time being at least, the last mud pie has been flung and the last stink bomb hurled, the Ol’ Bloviator deems it safe to emerge from his bunker, where he was fully prepared to gobble down a cyanide capsule the very next time ol’ Zig-Zag Zell talked up Michelle Nunn in one ad only to endorse Nathan (Double) Deal-er in the very next one. Indeed, the O.B. even dares to toss out a few little “drive-by” observations about this most recent demonstration of our state’s chronic electile dysfunction. The first is directed to the bunch of the absolutely devastated folks who were actually envisioning the Democratic governor- and senator-elects riding down Peachtree through a blizzard of tickertape in a  Mustang ragtop driven by Barack Obama.  What in the hell were you thinking? The demographers and survey researchers and assorted sunshine pumpers leaping to absurd conclusions may shout all they please that Georgia is getting “bluer” by the minute, but they would be a lot more accurate –and get a lot less attention, of course—if they described it as gradually fading toward purple.

As a testament to that gradualism, that map yonder shows the 34 Georgia counties (in blue) carried by Barack Obama in 2008. These also account for all the counties carried in 2014 by Democratic senatorial candidate Michelle Nunn and gubernatorial aspirant Jason Carter, except for the two in green: Henry (carried by both) and Wilkinson (carried by Carter). In many of the old Obama counties, the margin was razor thin to non-existent. Nunn battled to a flat-footed tie down in Baker, which Carter lost by 13 votes. The counties captured by Nunn and Carter include all those with black majorities, and, save for that hotbed of sedition and free love that we call home, none of their remaining counties are effectively less than 40 percent black.

Black ballots were clearly very much a factor in about the only good news to come out of this otherwise disastrous election for the Democrats, the breakthrough in Henry County, where the population is now roughly 40 percent black. Mitt Romney managed a 3,000-vote win there two years ago, but both Nunn and Carter squoze by this time with about 400 votes to spare. However pleased Democrats may be to see some apparent movement in the right direction in Henry, things were at an almost dead calm in the six additional metro counties that have gone Democratic in recent presidential elections. Both Nunn and Carter ran within a point of Obama’s percentages in 2012. Obama gobbled up about 98 percent of the Georgia black vote in that contest, compared to 92 percent for Nunn and 89 percent for Carter this year. As always for Democrats in these parts, however, the problem was not with the black support. Exit polls show Nunn and Carter receiving but 23 percent of the white vote, precisely the share claimed by Obama in 2012.

There was a little departure from recent precedent along gender lines among whites. In recent years, the gap between the voting preferences of white women and white men in the South has been negligible, and, if anything, enthusiasm for the Repubs was slightly higher among the former.  The eight-point advantage Nunn enjoyed among white women as opposed to white men in this election might simply be ascribed to gender loyalty, were it not for the nine-point male-female differential favoring Carter. As with most such shifts in voter behavior, we won’t know what, if anything, this one means until it’s election time again.

One thing we definitely know hasn’t changed is the resistance of working class Southern whites to any and all Democratic entreaties and advances. Five majority white counties showed average weekly wages below $500 in 2012. That sweat-shoppin,’ outsourcin’ son of a gun. David Perdue, carried all of them resoundingly, three of them by more than 80 percent. In fact, ol’ down-sizin’ Dave actually ran a teency bit stronger with whites making less than 30 grand a year than among those knocking down more than 100K.

Surely, it is no less striking that white Georgians would re-elect a governor who, by all rights, should be stamping out license plate, instead of signing bills into law. One thing is for sure, both Carter’s and Nunn’s disappointing showings demonstrate that political coattails go threadbare in a hurry, although in Carter’s case, it’s difficult to know if there were any in the first place.

There was a time when moderates could sell themselves as more conservative than they were, as Jason’s grandpa did in 1970, when he managed to pull in enough Wallace and even Maddox voters with a bunch of jawboning against busing and government social programs to whup that liberal elitist Carl Sanders in the Demo primary and breeze into the governor’s mansion past hapless Hal Suit, the nominee of a bunch of equally hapless Georgia Republicans. Not so today, however; the Republicans are tightly ensconced, and there is absolutely no chance of their letting you con voters into thinking you are anywhere near as conservative as they are. Yet, to varying degrees, both Carter and Nunn were ultimately reduced to employing what amounts to the “I’m-more-like-my-opponent-than-you -think” strategy, and their  altogether predictable failure simply affirms that if you’re running against Jesus, “What a Friend We Have in Jesus” just doesn’t get it as a campaign theme song.