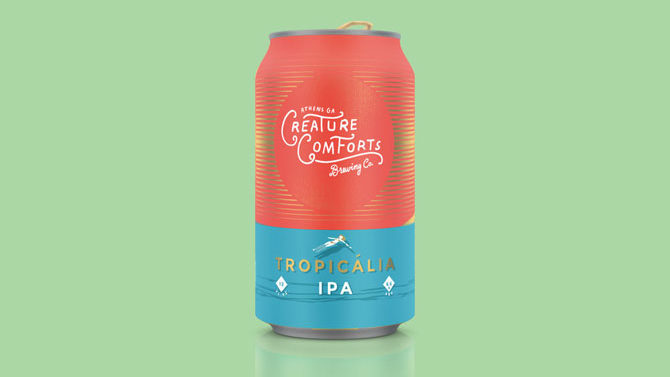 Creature Comforts Brewing Co. launched its can line on Monday and already is planning to expand, CEO Chris Herron told reporters at a media event on Monday.

The downtown Athens brewery plans to expand its capacity from 4,000 barrels to 8,000 barrels annually in February. That’s an increase of 1.3 million cans (a barrel is two kegs or 31 gallons).

Herron said the expansion is ahead of schedule. “We knew Athens drank, but we didn’t know Athens drank that much,” he joked.

Currently cans of Tropicalia IPA and Athena, a sour berliner weisse, are only being distributed in Athens, but the expansion will allow Creature Comforts to sell cans in the Atlanta area as well, Herron said.

The company also plans to start producing cans of Reclaimed Rye in January and Bibo, a pilsner, in March, he said.

Another expansion to 15,000 barrels is already in the works, Herron said. Ultimately, Creature Comforts could produce 22,000–25,000 barrels in the former Snow Tire space it renovated, but it’s more likely that the company would seek a second brewery at that point while keeping the Hancock Avenue location, he said.

In addition, Creature Comforts is preparing a full calendar of seasonal and limited-release beers, many of them brewed with local ingredients like blueberries and wheat.

Laws governing breweries are stricter in Georgia than in most states—they can give tours, sell glasses and fill those glasses with free samples, but they can’t sell beer directly to the public. Herron said Creature Comforts has hired a lobbyist to convince state legislators to tweak the law so that tour-goers can take some beer home with them, although he said the company has no interest in selling directly to retailers.

Creature Comforts is working with the Athens-Clarke County government to legalize tours on Sunday, too. The brewery is now classified as a bar under ACC law because it doesn’t sell food. (Restaurants can open on Sundays but not bars, according to state law.) However, since it technically doesn’t sell alcohol, either, ACC is willing to allow Sunday tours, Herron said.