Why the South ‘Baled’ Out and Scotland Didn’t 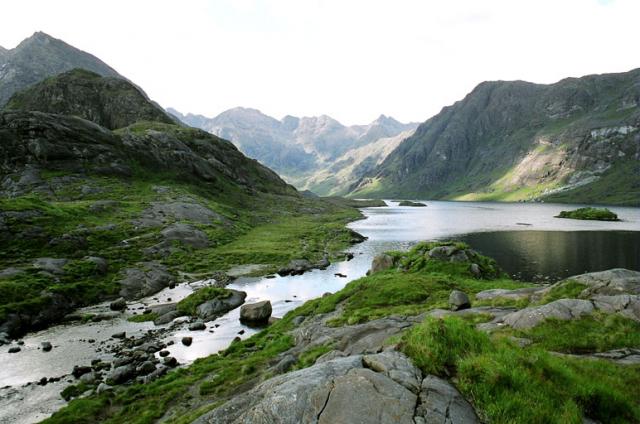 The Cuillin Mountains in Scotland.

From where the Ol’ Bloviator sits, it’s fair to say that the South and Scotland go back a ways.

For example, the cult of the “Lost Cause” that sprang up in the aftermath of the South’s failed fight for independence had something of an antecedent in the fabled “lost cause” of the Scottish Jacobites whose four-decade struggle to restore to the Stuart monarchy of Scotland to its rightful seat on the thrones of England, Scotland and Ireland was heartily romanticized in the novels of Sir Walter Scott.

Scott’s glorification of the swashbuckling supporters of the Stuart restoration was so popular with the southern upper classes in the antebellum era that Mark Twain famously cited their affliction with the “Sir Walter Disease” as the principal cause of the Civil War.

Beyond that, the strategically critical Confederate defeat at Gettysburg in 1863 is sometimes compared to the 1746 Battle of Culloden, where Jacobite forces, representing by no means all of the Scots, but comprised in large measure of wild and exceedingly hairy (not to mention altogether ungovernable) Highlanders, were crushed by Hanoverian forces representing George II.

Unlike Gettysburg, the matter in dispute at Culloden was not separation from Great Britain, but actually reunification under a Scottish monarch. On the other hand, there are similarities in the fact that the Confederate forces at Gettysburg were there largely at the behest of an aggressive slave-holding minority who saw their interests being better served in an independent southern nation, while, the Highlanders saw returning the Stuarts to the British throne as their best bet for retaining their cherished independence to rut, drink, brawl, and pillage as they damn well pleased.

There are similar parallels with Thursday’s vote on Scotland’s secession, although the “nays” had it in this case, and with 85 percent of those eligible showing up to weigh in on the matter directly, it was far more democratic than the process by which the South left the United States 153 years earlier, when only Virginia and Tennessee required a popular referendum to certify their respective legislatures’ votes for secession. Perhaps the most striking parallel lies in the economic centerpiece of the secessionist appeal in both cases.

Sorry, Alex Salmond, but compared to the South’s position in the global economy in 1860, today’s Scotland is something of a bit player. By the 1820s, the southern states had already become the world’s premier supplier of cotton, and by the late antebellum period, more than three-fourths of its cotton was being exported.

Not only was cotton the leading American export in the antebellum period, but when cotton was combined with the two other leading southern staples, tobacco and rice, the South, with just over a third of the nation’s population (free and slave), accounted for well over half of the value of all American exports during the 1850s. With cotton prices rising by more than 11 cents a pound over the decade, the value of slave property alone soared to an estimated $3-4 billion by 1861, making the Confederacy, by aggregate measurement at least, one of the wealthiest nations in the world.

The South’s prominent position in the world economy not only encouraged Southern leaders to oppose the protective tariff and other measures disadvantageous to the cotton export trade, but it reinforced their predispositions toward a belief in southern superiority or even invincibility.

When he proclaimed in 1858 that “Cotton is King” and “No power on earth dares to make war on it,” South Carolina’s James Henry Hammond actually sounded fairly moderate in comparison to another Southerner, who insisted that without Southern cotton “England would topple headlong and carry the whole civilized world with her, save the South.” Such assertions may seem altogether ludicrous in retrospect, but at the peak of England’s textile expansion, the loss of southern cotton, which then accounted for nearly 80 percent of its cotton imports, would obviously have smarted quite a bit.

Alas, however, unbeknownst to the overheated southern orators who were lustily proclaiming the perpetual reign of King Cotton, the great British textile boom of the nineteenth century had already begun to recede. Britain’s leaders could hardly have recognized it at the time, but thanks to a prudent policy of limited cotton stockpiling in recent years, a bumper 1860 crop already on hand, and reasonable prospects for relying on alternative sources such as Egypt and India if need be, they would soon feel less need for the vaunted southern staple than those across the Atlantic who had invested such faith in it could ever imagine.

Even if British textile magnates had presumed their desire for that staple would survive the Civil War undiminished, they had little reason to doubt that, as in the past, Northern agents, factors and shippers would still be critical to whatever postbellum commerce in southern cotton they might conduct.

There was also industrial England’s continuing need for northern wheat (which accounted for, on average, about 25 percent of its wheat imports in the 1850s), and the annual volume of pre-war commerce between England and the northern states in general had to be considered as well. (Suffice it to say, nobody in the King Cotton camp seemed to have pondered the effects of having to forego the substantial supply of Midwestern wheat and northern manufactured goods also purchased by southerners at that point.)

In addition, had blustering, cotton-drunk Southerners sobered up even briefly, they might also have picked up on signals from a reconfigured and rapidly modernizing North Atlantic trade network that industry, not agriculture, was to be the new dynamo of world capitalism.

While the South, with only 11 percent of America’s manufacturing investment in 1860, had shown neither the capacity nor the inclination to adjust to this transformation-in-progress, the emerging entrepreneurial culture and stellar economic prospects of the mid-Atlantic and northeastern states had already attracted the attention and investments of their on-the-make counterparts in Britain who had good reason to believe that the two could be looking at a bountiful future together.

Beyond such dollars and cents calculations, it is fair to say that the 100 percent cotton blinders favored by southern leaders apparently obscured the size and growing strength of the abolitionist movement, not only in England but elsewhere in Europe.

If the foregoing raises doubt about the savvy of the Southern secessionist contingent, it should at least be noted that most of the unheeded signals not to leave the Union are far more obvious in retrospect than they could possibly have been at the time. That is not the case, however, with the economic pitch served up by Scotland’s contemporary campaigners for independence.

Southern secessionists’ faith in the long-term power and viability of King Cotton may have been overly optimistic, even wildly so, but their claims did not fly in the face of any such massively contradictive body of evidence and analysis as confronted the assertions of Scottish secessionist leaders like Alex Salmond that an independent Scotland stood to reap a veritable bounty in what he estimated to be 24 billion barrels of remaining North Sea oil deposits, which, in turn, could be used to fund the expanded welfare state most independence advocates seemed to desire.

Respected petroleum experts not only suspect that Salmond has overshot the mark here by 40 to 60 percent, but point out as well that current North Sea oil production is down two-thirds from its 1990s peak. Beyond that, there is no guarantee that the U. K. will actually hand over all the tax revenue generated by North Sea oil production, and even if it does, last year’s tax take of 5 billion pounds is equivalent to only about 3 percent of Scotland’s economy.

Meanwhile, major international petroleum companies largely seem more inclined to cut back on their North Sea operations than to expand them, given the current uncertainty both over oil prices and the cost of new production facilities. All of this is to say that putting all the South’s eggs in the cotton basket in 1860 seems almost conservative compared to the efforts of Scottish secessionists to downplay the astonishing risk attached to a “King Petroleum” secession strategy.

There were, of course, additional related concerns that may have undermined the  efforts of the Scottish “Secesh.” While the currency question was less troubling at the outset for the Confederates, the matter of whether an independent Scotland could continue to pound the pound or, if not, could even count on being able to jump immediately to the Euro clearly loomed large in Thursday’s vote.

Beyond the concrete issues on which the Scottish secession movement was ultimately splattered, from Charleston in 1861 to Edinburgh in 2014, sentiment for disunion was fueled in no small part by pure emotion, be it festering resentment or wounded pride or a combination thereof. In this respect, back-to-back screenings of “Brave Heart” and “Gone With The Wind” might give us the best comparative perspective on two secession movements separated by more than 150 years.

Failing that, maybe just noting that ol’ 007 himself, Sir Sean Connery, saw Scottish independence offering a glorious opportunity to toot his homeland’s horn and maybe even make a pound/euro in the bargain through “international promotion of Scotland as an iconic location.” Whatever comes next, Sir Sean will surely be as eager as the ol’ Bloviator to see whether the resurgent independence movement, which has clearly stirred Scotland, will leave it thoroughly shaken as well.

(An earlier version of this piece was posted at www.likethedew.com)

Movie Dope: The Dance of Reality, The Boxtrolls and More