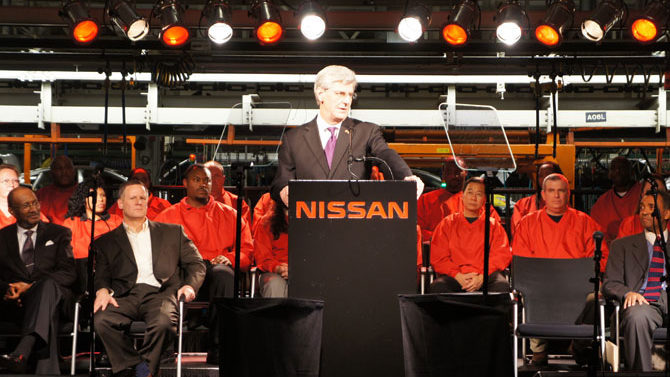 The older he gets and the worse things get, the Ol’ Bloviator is finding progressively less satisfaction in yelling, “I told you so!” when one of his rants about our ever madder dash toward doom proves accurate. This is certainly true in the case of two recent and remarkably similar incidents that amount to textbook examples of the ongoing devaluation of education in the face of a comparably blind but increasingly overpowering obsession with industrial development as a “bargain at any cost” panacea for all our ills.

Witness the crisis over in Alabama, where their subsidies to new plants over the last two decades have long since run well into the billions, but  it seems they are running short of cash just now to shower on the next corporate candidate for a humongous  public payout. Not to worry, however, Alabama Gov. Robert Bentley has come up with an inspired yet simple solution for this dilemma; he wants to shift funds from education in order to shore up the stash he draws on in his role as the state’s official bagman to new companies. The rationale for this switcheroo seems clear enough to Bentley: “Who pays for the incentives? It’s not education, but they benefit from it totally… you ought to eat what you kill.” (If the guv really practices what he preaches here, he better pray he never hits a feasting buzzard while traveling on Alabama’s excellent highway network.)

Although some Alabama legislators expressed reservations about a special legislative session geared to making the governor’s enlightened proposal a reality, it was not clear whether they objected to the move so much as to Bentley’s failure to consult with them before releasing what he later insisted was merely a “trial balloon” that had simply been “misconstrued.” Yeah, right. Alabama governors are known for their exceedingly complex thinking and rhetoric. For example, it took the O.B. forever to figure out what “Segregation Now! Segregation Tomorrow! Segregation Forever!” meant. Unfortunately, former Gov. Fob James’s intellectual firepower went largely unappreciated, as became apparent when his industry-hunting trip to Israel was billed as “Our Yahoo Meets Their Netanyahu.” Not coincidently, perhaps, back in the ‘90s, it was Fob who tried to raid the school fund to pay off part of the state’s subsidy obligation to Mercedes.

Meanwhile, Mississippi politicians are seldom accused of subtlety, and when they are, it is almost always in comparison to their counterparts in Alabama. According to Carl Gibson in Huffington Post, July 23, 2014, the state of Mississippi has been in violation of its own laws since 2008 by failing to provide its legally mandated share of public school funding. It is currently spending $648 less per pupil than it did in 2008, and since then, it has racked up an illegal deficit in public education of at least $1.3 billion. In what must surely rank as the great-grandmother of all coincidences, that is precisely the figure arrived at by researchers in 2013 as the total value of the tax breaks promised to Nissan in exchange for locating a production facility at Canton, MS.

Over 30 years, the tax abatements offered Nissan will cost Madison County an estimated $210 million in revenue that might otherwise have been spent on schools. Beyond that, in a program truly reminiscent of the old sweat shop days when workers’ paychecks were docked for a “subscription fee” used to defray the cost of building their employer’s plant, Nissan is also allowed to keep what would normally be state income tax deductions from their employees’ wages. Over 25 years, this nifty little palm greaser could ultimately top off at $160 million.

Reports of such extravagances in two states not exactly known for their heroic sacrifices in the war against ignorance simply underscore the hypocrisy of current pious calls for “austerity,” the fallout from which continues to fall heavily on public education.

Perhaps the O.B. might be forgiven for nearly going a tad bit postal upon reading a New York Times account of Ranger Rick Perry’s efforts to oust the current president of the University of Texas where, instead of just teaching the great gobs of info they already know, the faculty are apparently wasting their time and the public’s money in trying to find out even more stuff (God knows what) to teach. Instead of reaching for his 12-gauge, however, the O.B. ultimately opted for a high-minded remonstrance, dispatched to the nation’s number-one publishing platform.

In an otherwise excellent account of efforts to oust the president of the University of Texas, the Times writers twice refer to recent cuts in legislative appropriations for public higher education as “declining state subsidies.” In the current political climate that this story so vividly reflects, this is heavily freighted language. However inadvertently, it reinforces the popular notion that state funding for an institution created by the state to function as a duly constituted obligation of the state is instead some sort of voluntary dispensation or indulgence. In the operative sense of the word, the funding received by the University of Texas from the State of Texas is no more a “subsidy” than is Gov. Rick Perry’s salary.

The O.B. assumed at the outset, correctly, as it turned out, that his missive would almost certainly never make it into print, but he also assumed that sending it would at least make him feel a little better. Maybe it did, but the futility and meaninglessness of his gesture was quickly hammered home not only by the foregoing accounts from Dixie but comparable ones from elsewhere in the country, like New Jersey, where Gov. Chris[py Kreme] Christie has already signed off on $2 billion in corporate subsidies, and state funding for higher education has fallen by more than 20 percent over the last six years. It was once almost a given that politicians were obliged at least to pay lip service to the notion that education is a powerful engine of economic progress. These days, a growing number of them seem to want us to see it as merely a cumbersome caboose.