Normandy on D-Day Was the Most American Place on Earth 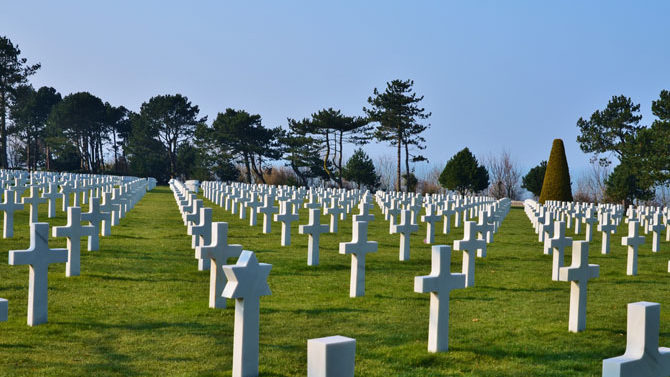 I once wrote a book about the Mississippi Delta called The Most Southern Place on Earth. Were I to undertake a comparable tome about the most “American” place on earth, believe it or not, the focal point would not only lie outside the United States, but, of all places, in France, specifically the Normandy American Cemetery at Colleville-sur-Mer, where lie the remains of 9,387 of the U.S. troops who died during the June 1944 Allied invasion.

More than any other historical site or monument that I have ever visited—in fact, more than all of them put together—this place engulfs me in a wave of teary, tingly emotions. Set atop a bluff overlooking the English Channel and Omaha Beach against a stunning backdrop of lush, unimaginably green grass and perpetually wind-bent trees, even with the surf pounding rhythmically just below, the iconic, seemingly endless rows of perfectly aligned white crosses convey a palpable sense of peace and order that belies the chaos and wholesale slaughter that raged down on the beach 70 years ago. There is some irony in the fact that the Normandy American Cemetery provides entree and closure to the epic 1998 film Saving Private Ryan, whose opening scenes reflect an unprecedented cinematic effort to depict the D-Day landing as the nightmare of bloody, headless, legless, disemboweled carnage and confusion that it actually was.

In truth, this placid and pristine setting seems far better suited to serve as the final resting place of characters slain in earlier, less graphic World War II movies like The Longest Day who died neatly and, so it would seem, painlessly, shot down as they stood just inches from an apparently bulletproof John Wayne or Robert Mitchum. After all, in the popular mind at least, this was a war in which men died bravely and stoically, repeating the Lord’s Prayer or receiving the last rites or saying the Kaddish, not one where agonized screaming or crying was punctuated by horrible blasphemies alternating with piteous, little-boy pleas for “Mama.”

There is no record of the final minutes of Technical Specialist Five Joseph G. Hardy, the only World War II soldier who entered the service in Clarke County to be memorialized at the cemetery. In reality, Hardy, who actually hailed from the tiny hamlet of Good Hope (pop. 219) in nearby Walton County, never even set foot on the sands of Normandy, because he was among the 39 members of Battery B of the 4th Infantry Division’s 29th Field Artillery Battalion who were killed when their landing craft struck a mine on its approach to Utah Beach on June 6. Like most of his fallen battery mates, Hardy’s body was never recovered, and thus his name is among the 1,557 inscribed on the “The Walls of The Missing,” which encircle a beautifully maintained garden.

Idly perusing the names and accompanying states etched on the gravestones, I found myself wondering how many of the small-town boys like Joseph Hardy had even been out of Georgia, Alabama, Mississippi or South Carolina prior to the war. It is frankly difficult for me grasp how so vast an abstraction as national allegiance or patriotic duty could motivate thousands of such men to come thousands of miles away from home to step off landing crafts and wade into an unrelenting volley of lethal lead. In anointing this place with their blood and sacrifice, they made it both an enduring shrine to American national identity and a source of gnawing self-doubt for succeeding generations destined to remain forever in their debt.

Those buried here secured their hallowed place in history by giving their all in an epochal encounter that effectively secured victory in what seemed an indisputably righteous crusade against a correspondingly monstrous evil. In contrast, Vietnam veterans of my generation, who no less heroically risked or sacrificed their lives have been caught in a historical backlash against a conflict that, unlike World War II, did not unify us in defense of our longstanding ideals but instead divided the nation and called those ideals into question. In what seems an era largely lacking in courage and commitment, some of today’s visitors to the Normandy American Cemetery are likely to leave inspired but also perhaps a bit saddened by a sense that those interred in this magnificent setting died in defense of a nation far worthier of their sacrifices than the one we live in today.

In reality, of course, this perception requires some degree of selective historical amnesia. For example, despite serving in a bloody struggle to defend democracy against a racist, totalitarian onslaught, African American soldiers in World War II found themselves fighting not just the Germans and the Japanese but the hostility of white civilians living in the vicinity of their stateside postings and, worse yet, the resentment and distrust manifested within the ranks by their own white comrades and commanders.

D-Day operations reflected these racial realities quite clearly, as only a single battalion of black troops actually landed on Omaha Beach on June 6, 1944. Soldiers of the 320th Barrage Balloon Battalion came in on the third wave to set up anti-aircraft barrage balloons aimed at preventing German pilots from strafing the beach. Three members of the 320th are buried here, including Cpl. Brooks Stith from Virginia and Pfc. James McLean from North Carolina. Had the two survived, both would have returned to essentially the same segregated, discriminatory and disfranchised existence they had left behind, although black soldiers who came back from the war would go on to play a pivotal role in laying the groundwork for yet another all-out offensive that ultimately toppled Jim Crow.

Those who stand in awe of this fearless band of postwar civil rights crusaders might well harbor certain sentiments common to American visitors to the Normandy Cemetery, including the fictional Pvt. James Francis Ryan, who, kneeling at the end of the film amid the graves of the comrades who gave their lives to save his, wonders aloud whether “in your eyes I’ve earned what all of you have done for me.”