When the legend-deity Paul “Bear” Bryant died in January 1983, shortly after resigning as head coach of the Alabama Crimson Tide, members of the arch-rival Auburn fan base had reason to hope that the end of their perennial frustration with losing to the lads from Tuscaloosa might finally be in sight. Sure enough, in the very next matchup between the two teams, leading by three points with time running out, Auburn stood on the brink of making that hope a reality when Tigers coach Pat Dye, faced with the choice of punting or going for it on fourth down, cast his gaze to the heavens and asked for God’s guidance in making his decision. “Go for it, my son!” the Lord thundered without hesitation, “Go for it!” Naturally, Dye did as advised, only to look on in total flabbergastion as the Tide easily stuffed the play, took away the ball on downs, marched down the field for a touchdown and won the game. As he staggered back to the locker room, a tearful Dye cried out in anguish, “Lord, why in the world did you tell me to go for on it on fourth down?” After a pregnant pause, the Almighty responded, “Beats me, Son. Bear, why did we tell him to do that?” 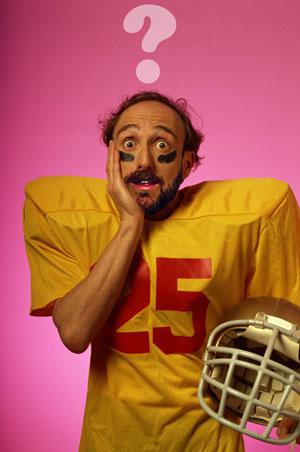 Pre- and post- game prayers have long been associated with America’s most violent big-time college sport, but in recent years as the sleazier and more corrupt aspects of major college football have become increasingly apparent, it seems to the Ol’ Bloviator there has been a corresponding increase in the number of coaches who go out of the way to invoke the Almighty at every opportunity. Sure enough, in a national television interview in the wake of a rare victory for the Georgia Bulldogs over the Florida Gators (who have positively dominated them over the last 20 years or so) Georgia coach Mark Richt prefaced his response to a reporter’s first question with “To God be the glory. I’m so thankful… ” Well, the Ol’ Bloviator reckons that if God had something to do with the Bulldogs beating the hated Gators for only the fourth time in the last 15 years, then it was clearly as big a night to howl up in Heaven as it was here in good ol’ Athenstown. Now don’t be gettin’ the OB wrong. He’s not questioning the sincerity of Mark Richt’s remarks or anybody else’s, for that matter. He is, however, a bit unsure, regardless of whether they come from the coach at Georgia, Clemson, Ole Miss, or East Cayuga Community College, whether such gestures actually glorify God or trivialize Him. For example, does a statement like Richt’s imply that God actually dedicated some of his energies to shaping the outcome of an encounter that, despite its overweening importance to a couple hundred thousand fanatics in these parts, amounts to not a heck of a lot compared to all the truly critical life-and-death concerns affecting millions of people crying out for His attention around the world?

As most Georgia fans see things, of course, it would be entirely appropriate for God to prefer the infinitely more-endearing “woof-woofers” of the Bulldog Nation to the “jorted” [i.e., jeans-shorted], mullet-coiffed denizens of Gatordom, even though this would run somewhat contrary to His numerous professions of special concern for the suffering of the truly pathetic. Moreover, if He likes Georgia or our coach so much, where has He been for eight of the last 11 years? Regardless of how they are intended, don’t attempts to link God to a triumph in any human conflict, be it mundane or monumental, amount at some level to a reiteration of the old Austin Lounge Lizards’ famed ditty, “Jesus Loves Me, But He Can’t Stand You”?

Mark Twain’s satirical skepticism, I dare say cynicism, was never on more brilliant display than in his famed “War Prayer,” where the supplicant of a warring nation implores the Almighty to “help us to tear their soldiers to bloody shreds with our shells… to drown the thunder of the guns with the shrieks of their wounded, writhing in pain… to lay waste their humble homes with a hurricane of fire… to wring the hearts of their unoffending widows with unavailing grief… to turn them out roofless with little children to wander unfriended the wastes of their desolated land in rags and hunger and thirst… broken in spirit, worn with travail, imploring Thee for the refuge of the grave and denied it – for our sakes who adore Thee, Lord, blast their hopes, blight their lives, protract their bitter pilgrimage, make heavy their steps, water their way with their tears, stain the white snow with the blood of their wounded feet! We ask it, in the spirit of love, of Him Who is the Source of Love, and Who is the ever-faithful refuge and friend of all that are sore beset and seek His aid with humble and contrite hearts.”

Okay, this might be a little over the top for what most Bulldog fans would like to see happen to the Gator hordes [or the Cajun swarms], although just how far over, the OB dares not say. Nor is he trying to imply that God does not intervene in human conflicts. It would be hard to imagine that He could have taken much of a shine to Hitler, for example, although if the outcome of World War II is in any sense a reflection of His intervention, He certainly took His own sweet time in getting involved.

Much as we would like to make it an allegory about good versus evil, heretical as this may sound, a football game is really just a football game. I doubt that anyone has trouble understanding why coaches or players would ask God to help them perform at their best when it’s time to take the field, but, barring the intervention of Satan’s co-conspirators wearing the striped shirts, the actual outcome of the contest itself has a lot less to do with the Almighty’s preference for one coach or squad over the other than the simple matter of whose “best” was better on that particular day. Finally, if, after all, the idea of a winning coach crediting God for his team’s success is simply to show appropriate reverence for His power, the OB thinks it only fair that the losing coach should also have the option of blaming The Man Upstairs for his team’s failure to make a single first down in the second half.