ACC Is Ready to Crack Down on Recycling Scofflaws 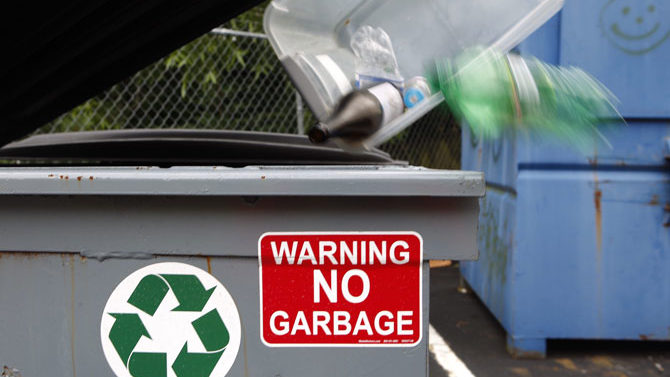 All businesses in Athens are required to offer recycling, which has been the case since an ordinance took effect on Jan. 1, 2014. But almost one and a half years later, only 40 percent of local businesses are fully complying with all the requirements, says Athens-Clarke County Commercial Recycling Specialist Joe Dunlop.

The ACC Commission passed the ordinance in 2013, mainly because many apartment complexes in town did not offer facilities for tenants to recycle paper, aluminum, glass and plastic, nor did businesses have anywhere for customers and employees to toss recyclables. (The law does not require anyone to recycle.) It’s a part of Athens-Clarke County’s goal to eliminate waste going to the landfill by 60 percent in 2018 from the 2010 levels. Despite low compliance rates, the city has already surpassed the 2015 goal of 40 percent.

Small, independently owned businesses are most typically the type of businesses that don’t comply, but many chains have done well, Dunlop says. A cause for the low compliance rate could be that people are unaware of all the requirements of the ordinance and have the impression that having a recycling program is enough. “People have some awareness of the ordinance, and they think, ‘Well, we have a company come in, and they recycle our shredded paper, so we’re good.’ Well, of course there is more to the ordinance than that,” he says.

The ordinance has two other requirements other than having a recycling program that collects all the items the county accepts. Commercial sites—businesses and apartment complexes—must also give recycling information, which the county provides, to employees or tenants. A recycling plan for the business must also be on file with the county, and for several, compliance is only hindered by not filing the paperwork.

From talking to virtually every business in town, Dunlop says most of them seem not to think the requirement is a big deal, but he acknowledges that some do not like for the government to tell them what to do. So far, The Club apartment complex has been the only business to be reported to code enforcement, but “that number is about to go up,” Dunlop says. “I’ve think I’ve been more than patient with a lot of these places, and at a certain point, I’m done.”

Once a business is reported, officials review the complaint. If the complaint is found valid, a ticket is written and a hearing is held before a magistrate judge. Violators can be fined up to $1,000, and in the one case where a business was threatened with that fine, the process proved to be effective, Dunlop says. “They heard that, and the recycling dumpsters appeared very quickly,” he says.

Dunlop also says he’s not looking to penalize businesses who are in contact with him and still working on complying, but rather ones who fail to try or will not return requests for communication from his department.