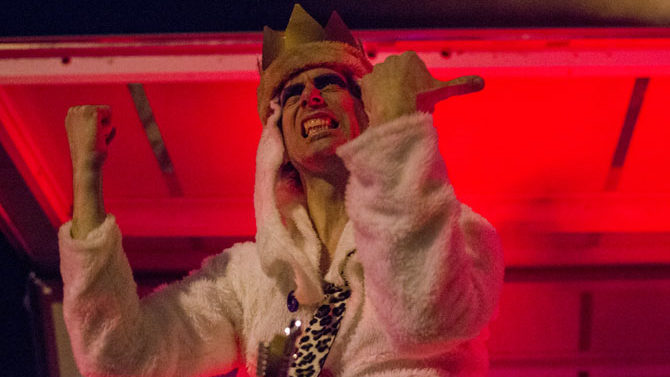 Each year, Timi Conley hears the same question while planning Athens’ Halloween parade: “What’s the Wild Rumpus going to be like this year?” For 2015, he has an answer: “I don’t know. What are you going to do?”

After six years of growing the wildly popular costume parade into a festival with music and kids’ activities, Conley (known for his roles in local bands Kite to the Moon, Abbey Road Live and Pigs on the Wing) is in need of some helping hands. Last year, more than 50 people volunteered in various ways to put the party together, but Conley still manages the majority of tasks during the year. After welcoming daughter Luna into the world in March, he’s ready to take a small step back and coordinate with other organizers. In particular, he could use help with sponsorships and fundraising—and, believe it or not, work needs to start now, even though Halloween is still six months away.

“I want to put out a call to creative individuals who have ideas, time and determination and let them contact me with their thoughts,” he says. “I have my own ideas, but I love other ideas.”

This year’s funds will go to Community Connection, which addresses the needs of low-income residents in Athens-Clarke and 12 surrounding counties through the 211 information hotline, HandsOn Northeast Georgia volunteer network and Non-Profit Development Alliance.

The parade will take place on Saturday, Oct. 31, and Conley wants to continue last year’s setup by hosting a kids’ event during the day and an after-party following the parade and outdoor show. He’s also organizing a ride for local bike enthusiasts.

Eventually, Conley envisions the Rumpus as Athens’ Mardi Gras, a weekend or weeklong celebration with events and parties surrounding the parade. He’d like to see satellite events at other locations, such as art venues, theaters and breweries. But he needs help to make it that extensive.

“The Wild Rumpus belongs to everybody. It belongs to Athens,” he says. “It wouldn’t have become this unless it was in Athens.”

Conley can be reached at wildrumpus13@gmail.com.