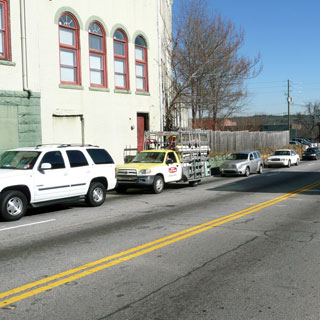 Plenty has happened during the two weeks since we last checked in on the downtown Selig development (thanks for indulging Flagpole’s much-needed year-end vacationâ€”as if you had a choice). Just before Christmas, the Atlanta firm posted previously unseen elevation renderings on its local PR website (www.seligathens.com), including views from Wilkerson and Oconee streets and the planned rail-trail extension of the Greenway. Of course, the perspectiveless, straight-on illustrations can’t purport to show what the edifices will look like in real life: to attain the viewpoint represented in the panoramic Wilkerson Street elevation, for instance, one would have to be suspended about 40 feet in the air above the North Oconee River, and the Waterford Place apartments would have to be taken out of the way. From the street for which the rendering is named, the building will look like what it is: a sheer, five-story brick wall giving way to eight splendid bays of visible parking and culminating, nearly a city block later, in another sheer wall. When you go to the site and look at the renderingsâ€”and you shouldâ€”keep that in mind; the tiny people at the bottoms of the illustrations will help give you an idea of what’s being proposed.

Right about the time those renderings were released, an Athens Banner-Herald article helpfully entitled “Walmart only option for downtown Athens development” reported that Selig VP Jo Ann Chitty “approached other grocers about leasing a 94,000-square-foot space at the proposed Oconee Street development, but none of them were interested.” As Chitty put it, “Walmart was the only one that was willing to adapt to an urban design”â€”which might have prompted the question: to which of these mutually exclusive conditions were the unnamed grocers unwilling to agree: a 94,000-square-foot space or an urban design? Chitty, unfortunately, did not elaborate. THe good news? That sheer wall at the corner of Wilkerson and Oconee is apparently being reconsidered, as architects look for ways to imbue the five-story Walmart parking deck with “more of a pedestrian scale.” Seriously.

And so, last week, with Selig’s PR onslaught thus humming along unchallenged and local elected officialsâ€”those not actively enabling the developer’s plans, that isâ€”content to wait for the release of Selig’s long-promised traffic study before reopening their “negotiations” with the firm, concerned citizens attempted to step into the breach. At the ACC Mayor and Commission’s Jan. 3 meeting, citizens aligned with People for a Better Athens, the group led by Russell Edwards that has circulated a petition opposing the “anchoring” of the development with a 94,000-square-foot Walmart, packed the commission chamber at City Hall as Edwards delivered the petition, bearing more than 17,000 names, to the M&C.

On a night when two commissioners, Kathy Hoard and Kelly Girtz, explained that they were voting against their personal beliefs not to fund public art at ACC’s new jail in deference to the “overwhelming” number of constituents who’d expressed their outrage over the proposalâ€””hundreds,” as Hoard put itâ€”it was tempting to imagine that Edwards’ passionately committed groupâ€”so often denigrated in the local media as “the anti-Walmart crowd”â€”might not, after all, be as easily marginalized as the narrative pushed by Selig and its shills would have it. If the mayor and commissioners weren’t impressed with the well-reasoned and well-articulated arguments by the dozen or so Athenians who lined up to address them, then the anti-public art crowd must be a persuasive lot indeed.

Two nights laterâ€”in a meeting to which members of the press and government officials were not among the 45 people invited by organizer Bob Sleppyâ€”Chitty and Scott Selig, also a VP of his family’s company, addressed a crowd of community members gathered in a rented-out NuÃ§i’s Space, across the street from the site of their proposed development. Then, they heard the testimony of a handful of local experts on urban design, environmental impacts of development, transportation and traffic, as well as presentations on neighborhood, business and civic character issues. Perhaps for the first time, high-ranking Selig executives were given serious professional criticism of their plan, as it pertains exactly to Athens and its downtown, from heavily credentialed authorities entirely outside their own purview.

The fact that the meeting was closed to the public and the press is a problem. As the commission meeting earlier in the week showed, this development commands intense community interest, and it’s very obvious that the community wants to be involved in discussions about how it will evolve. But if, as Sleppy contends, conducting these interactions in a bubble was the only way for them to happen at all, then it’s probably a good thing they did. Still, Selig won’t be accountable for having heard all this crucial input until it’s a matter of public record. It’s now time for the participants in last week’s meeting to share their knowledge with the rest of the community, with Selig’s acknowledgment that it’s listening. Scott Selig’s Dec. 4 Banner-Herald editorial concluded, “We look forward to working with the greater Athens community to develop a project that is good for downtown, good for Athens, and good for the region.” He and his family’s company must now be compelled to make good on that promise.

It seems highly unlikely that Selig’s traffic study, which must be approved by the state transportation department and must follow standard guidelines laid out in a manual by the Institute of Traffic Engineers, will find that Oconee Street can handle the added traffic load that this project, as planned, would bring. Additionally, its impacts on important civic assets like the Greenway and the multi-modal centerâ€”which have already been paid for with taxpayer dollarsâ€”are not to be discounted. This must be taken as the opportunity for real community input that we have thus far been denied.

Commissioners have to insist that members of the community be a part of the process of redesigning the complex if and when it becomes necessary, and it’s their responsibility to bring the developer to the table in actual negotiations to protect our long-term interests as a community. Incentives should be offered, if necessary, for Selig to turn their development into something that sanely and positively interfaces with the city that surrounds it. Selig has promised that its intention is to make Athens better, but make no mistake: we’re going to have to hold them to it.