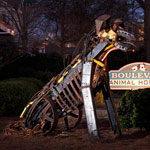 
“Lucy,” one of two giant metal dogs seated on the lawn outside Boulevard Animal Hospital on Prince Avenue. The pooches are on loan from their sculptor, Doug Makemson.

The Nitty Gritty: It appears Athens-Clarke County commissioners—with the blessing of local activists opposed to the closing of Hancock Avenue to accommodate the SPLOST-mandated expansion of the Classic Center—will move forward with hiring an architecture and engineering firm for the expansion as part of the mayor and commission’s February agenda. While critics of the expansion plans, and especially of the process through which they have been made thus far, have implored commissioners to slow that process down, the hiring of a design firm is seen as necessary to begin exploring ways to provide the Classic Center with the added space it needs by alternative means to those set out in the program plans produced under the auspices of Classic Center and SPLOST officials.

“The skill set we’re looking for” in a design firm, according to Commissioner Kelly Girtz, is one commissioners and staff should be able to discern from responses to a recent request for proposals for the project, even without the benefit of seeing advance alternative plans. Girtz says he’s talked to “two or three” other commissioners who are ready to move forward in this way; that’s a pretty good indicator that most will be on board (Andy Herod and Mike Hamby have indicated they’d support this approach).

Neither Girtz, Herod nor Hamby sees this step as a continuation of what’s been perceived as the fast-tracking of this project; each has expressed a desire to see the process slowed down in order to consider alternative visions. Let’s hope this will be the opening of a new public input process that can help create a plan that addresses the priorities of the community as a whole, and not just those of the Classic Center.

If you’re interested in discussing the issue with other concerned citizens, you’re invited to attend a meeting at 4:30 p.m. Thursday, Jan. 13 in the Lab at Ciné on Hancock Street.

Shocked, We Are Shocked!: It was with a resounding “Duh!” that those who have followed the story of the chemical contamination of Trail Creek and its aftermath greeted the news last week that testing of sediment in the creek revealed that toxic chemicals are still present in the creek bed. This disclosure comes on the heels of the Georgia Environmental Protection Division’s Nov. 30 lifting of its advisory against entering the creek, and in advance of the closure report that is due from J&J Chemical Co. on Jan. 14 in accordance with the remediation plan prescribed by the EPD.

Here’s a question: should we stay out of the creek again? Warning signs were removed after the EPD declared the water safe; the department has issued no further advisory in light of the new findings, nor has the ACC government. If one of the main lessons of the Trail Creek episode was supposed to be that better communication with the public is warranted in situations that might involve health and safety hazards, wouldn’t this have been a good opportunity to show that those lessons have been learned? Oh, well—maybe next time.

Do you have a vagina? Do you vote? If you answered “Yes” to both questions, consider yourself an enemy of the United States, according to your Congressman. In a Washington Times op-ed, Congressman Paul Broun, Jr. stated quite plainly that anyone who doesn’t interpret the U.S. Constitution as it was “originally intended and explained by the Framers” is an “enemy” of the United States. Broun is careful in his column to use the word “enemy” to describe both al Qaeda terrorists as well as “our domestic enemies who ignore the original intent of the Constitution.” Again, Broun is careful to say that it is not simply transgressing the modern Constitution, with its various amendments and judicial interpretations, that is a crime—one must adhere to the original intent of those wealthy white men in 1787. Or else you’re an enemy of the United States of America. It’s that simple, I guess.

Are you black? Do you consider yourself more than three-fifths of a person? Chances are, you’re an enemy of the State, according to Broun. The Constitution declared that the enslaved Africans owned by the framers were not fully human, if human at all. The framers as a group had no desire to see slavery abolished. Nearly every single framer of the Constitution believed that only the wealthy elite should be allowed to vote. Alexander Hamilton, one of the authors of the Federalist Papers, expressed many of the early leaders’ fear of democracy: “All communities divide themselves into the few and the many. The first are the rich and the wellborn, the other the mass of the people [who] seldom judge or determine right.” Framer Charles Pinckney called universal voting rights “theoretical nonsense.”