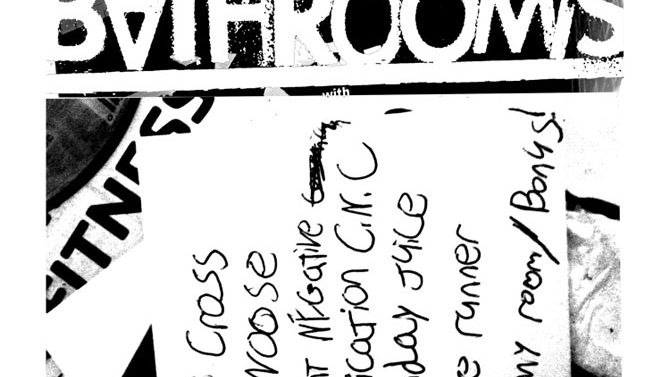 (Independent Release) The debut EP from Athens hardcore punk band BATHROOM/S blisters from the start. Each song is introduced with a nonstop barrage of quick, hammering swells. I hesitate to describe the group’s music as rawer than Harsh Words’ (another project involving BATHROOM/S’ Brandon Goss and Jason Griffin), but it definitely seems more metallic.

Drummer “Lenny” is superb throughout, as is Goss’ guitar playing. “The Cross” and “Noose” burst violently out of the gate. After this one-two punch, you’d think maybe the band would slow it down a bit. Not so. “Constant Negative Communication” starts even faster than the first two. “Birthday Juice” lulls the listener into a false sense of security by starting relatively slow and then quickly speeding up.

“Blade Runner” might be my favorite, with Griffin’s vocals sounding more desperate than they do on any of the other tracks. The guitar, bass and drums all grind along, as if making a beeline for the exit, while Griffin yowls. The last track, “In My Room,” has two distinct parts—the first one slower, the second one faster, with Griffin screaming about killing people. The track measures an epic two minutes, seven seconds; it’s by far the longest on the record.