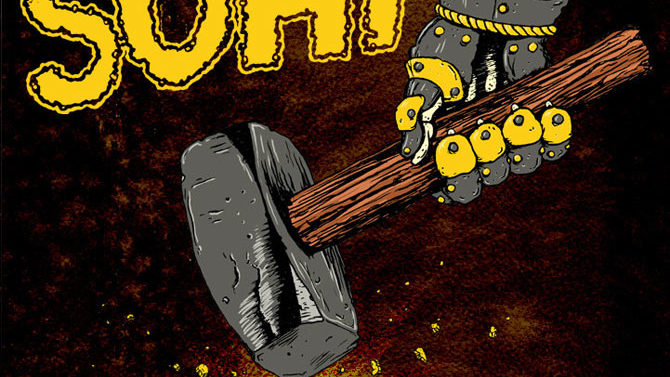 (Independent Release) Where South Carolina-based rapper SOHI and his mostly Athens-based company’s Hammer Squadron shines is in its small references to the world around us, the one in which we actually live. “And I have all the finer things, designer jeans/ What I need are the minor things, like dryer sheets,” raps SOHI on “Spooky Shit.” The celebration and the excess are there, and the celebration of self, but they’re interspersed with funny details. SOHI name-drops Honey Nut Cheerios; also, “My freezer got a pizza and some blood from a ox heart.”

Yet the listener has to sift through lots of fluff in order to get to the good stuff. Lines like “The bestest things in this life aren’t attached to strings, or so it seems/ I’m an evil of necessity” grasp for meaning rather than convey it. Several of the album’s tracks are composed entirely of abstractions. Too often they serve as inadequate vehicles for self-aggrandizement, as if they’re just supposed to “sound cool.” For instance, I can’t for the life of me tell you what “Gorilla Grodd” is about, though SOHI saves the track with some clever bragging.

All in all, I recommend giving Hammer Squadron a listen, finding your favorite tracks and bumping those at a party. Just don’t expect them all to be bangers.