My interest was piqued as I approached the house, a seemingly unspoiled midcentury classic, thoughtfully sited atop a gentle hill somewhere between Five Points and Beechwood. But what really sealed the deal was what was parked in front: a bitchin’ metallic gold vintage Volvo. I could tell this was going to be fun.

The home, built in 1952 for the Blumberg & Loef family, now belongs to Didi Dunphy and her husband, artist Jim Barsness. Dunphy is an energetic artist and designer who somehow also finds the time to be the Program Supervisor of the Lyndon House Arts Center and curator of the Gallery@Hotel Indigo-Athens. She generously opened her home and studio to the public on Saturday, Mar. 21 as part of WUGA’s fundraising series, Artists in Residence.

The tour was a standout for the series in that Dunphy’s work and home has a more minimal vibe and a higher degree of polish than is typical of most artists in the Athens area. Perhaps this, in part, reflects her upbringing in New York. There were no mismatched old chairs or hand thrown coffee cups here. Instead, visitors were treated to a pristine and open modernist home filled with Philippe Starck clear plastic “ghost” chairs, precisely hung and cutting edge contemporary art work, and avant-garde design books (many of which feature work by Dunphy). The artist’s delightful signature indoor skateboards were carefully placed throughout the space; one made of Italian ceramics was a centerpiece at the dining table. 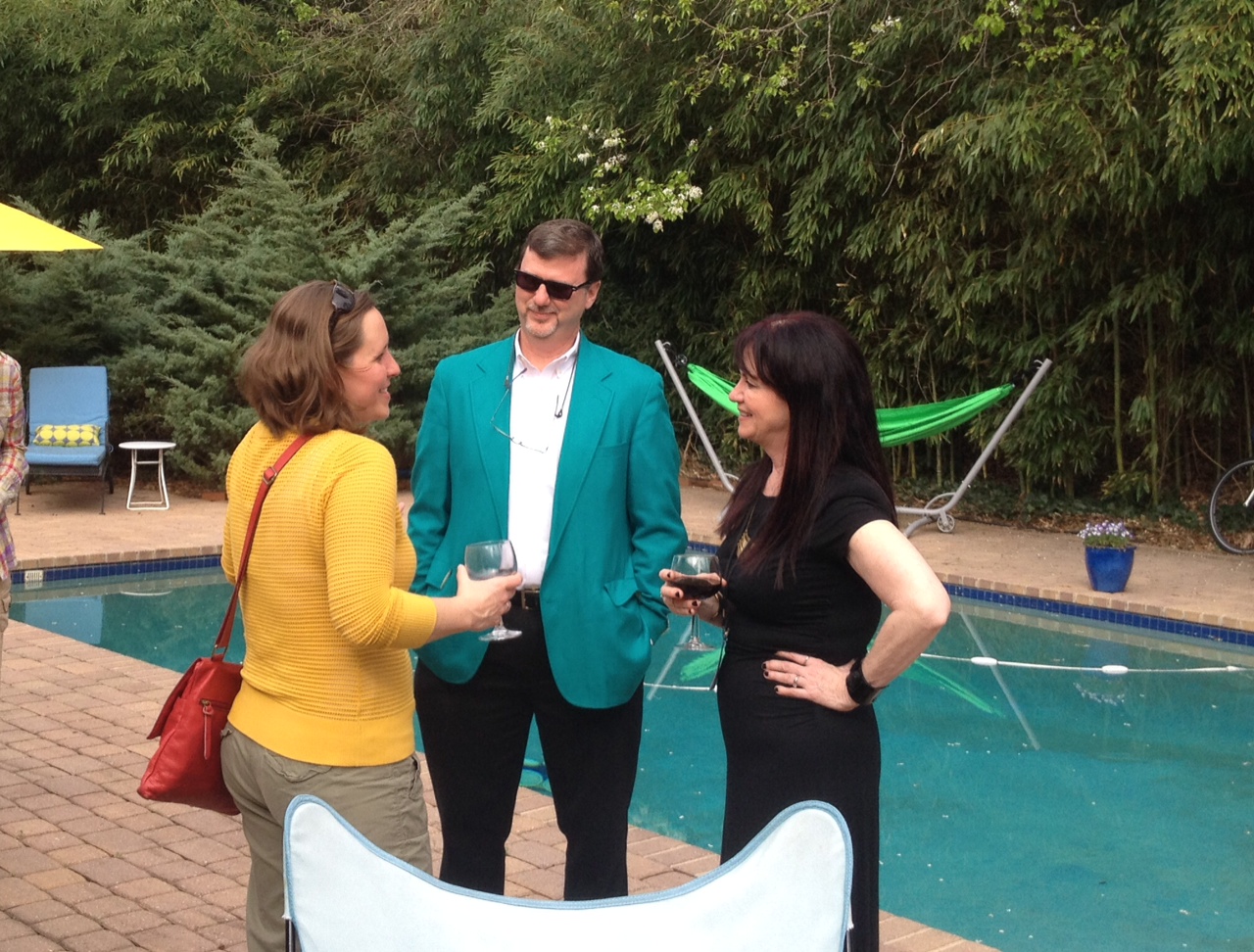 Asen Kirin, Associate Professor and Associate Director of the Lamar Dodd School of Art, spoke about the artist’s work and home midway through the event. He began by asking, “Why is it that we humans in general like so much to see other people’s houses?” After theorizing that “we humans want to know more about other humans,” he went on to laud the home as a place of creativity. While he acknowledged that the space was a respectfully preserved midcentury home, he also noted, “This is not a museum of midcentury design…Everything is contemporary and cutting edge. Everything is of today.”

At about the point where Kirin described one of Dunphy’s skateboards as “reminiscent of a posh, late 19th century interior,” it occurred to me that he could conjure poetry out of a bottle of dishwashing detergent. Seriously, if you haven’t yet heard one of his presentations, check the Flagpole arts calendar and do so when you can.

Dunphy also spoke briefly, describing her start as a performance artist and the importance of connecting people through her work. Then visitors finished their snooping. The artist’s studio, carved out of a former garage, was a favorite spot. One wall was lined in rows of floral bedecked skateboards. Dunphy’s new project, which features embroidered barcodes as part of an interactive map experience, was out and in progress. 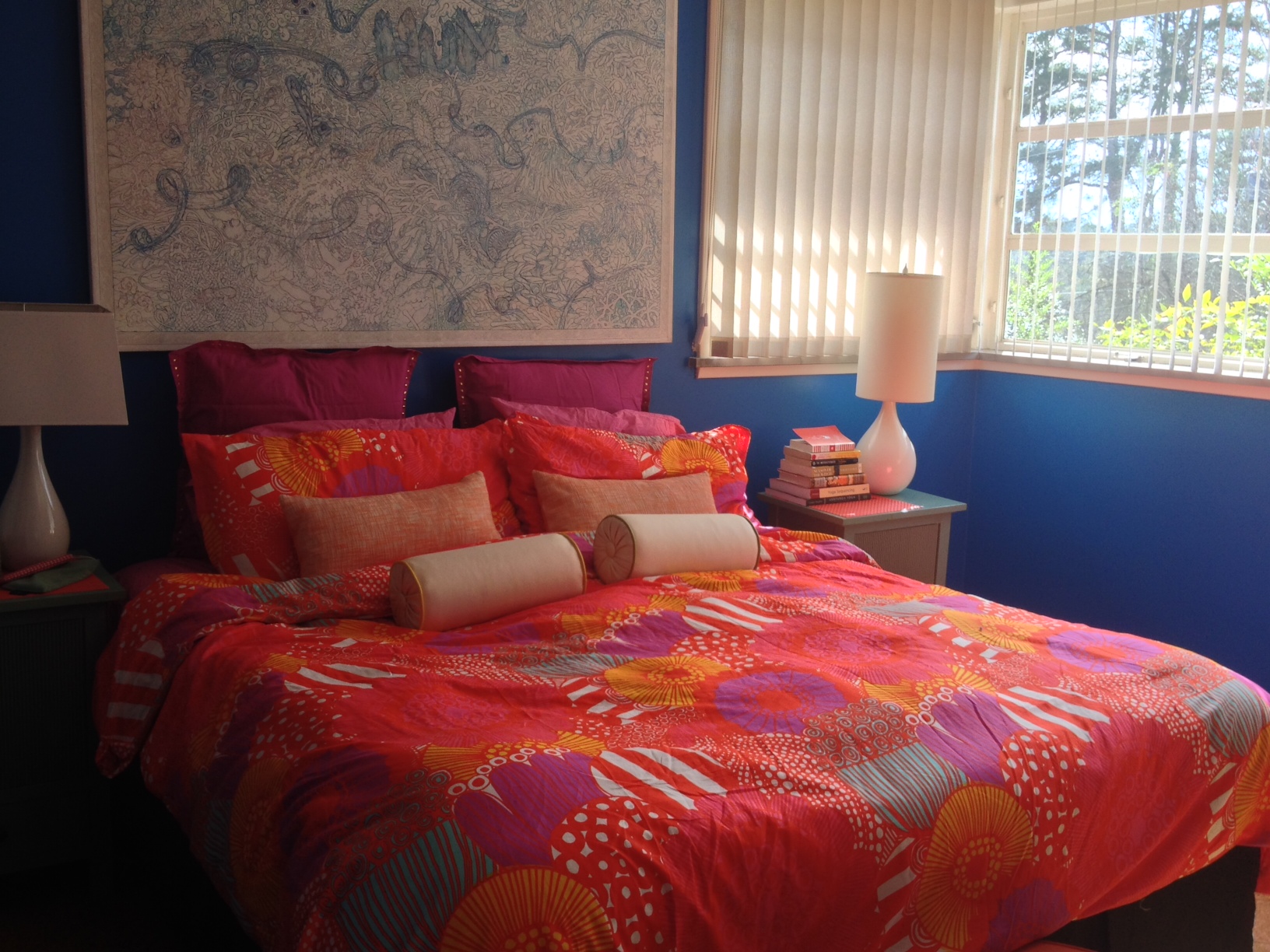 A painting by Jim Barsness hangs in the master bedroom.

Other highlights included a colorful installation by Lou Kregel and a photograph by Joshua Bienko of Christian Louboutin stilettos that have red soles painted with references to modern and contemporary artists. About wearing the heels, Dunphy shuddered and said, “Let me tell you–It’s a death defying act.” Also on display were “The Midguard Serpent,” a print by Jim Barsness that has been purchased by the Whitney; festive Marimekko bedding in the master bedroom; and Dunphy’s Lucy Rounds, playfully modern upholstered round pieces of furniture.

Dunphy likes to compare curating shows to throwing a dinner party. “You have a guest list, but it’s the differences that make it.” I would offer that Athens benefits from her fresh perspective and the added dimensionality that we, as a community of creatives, gain from it. 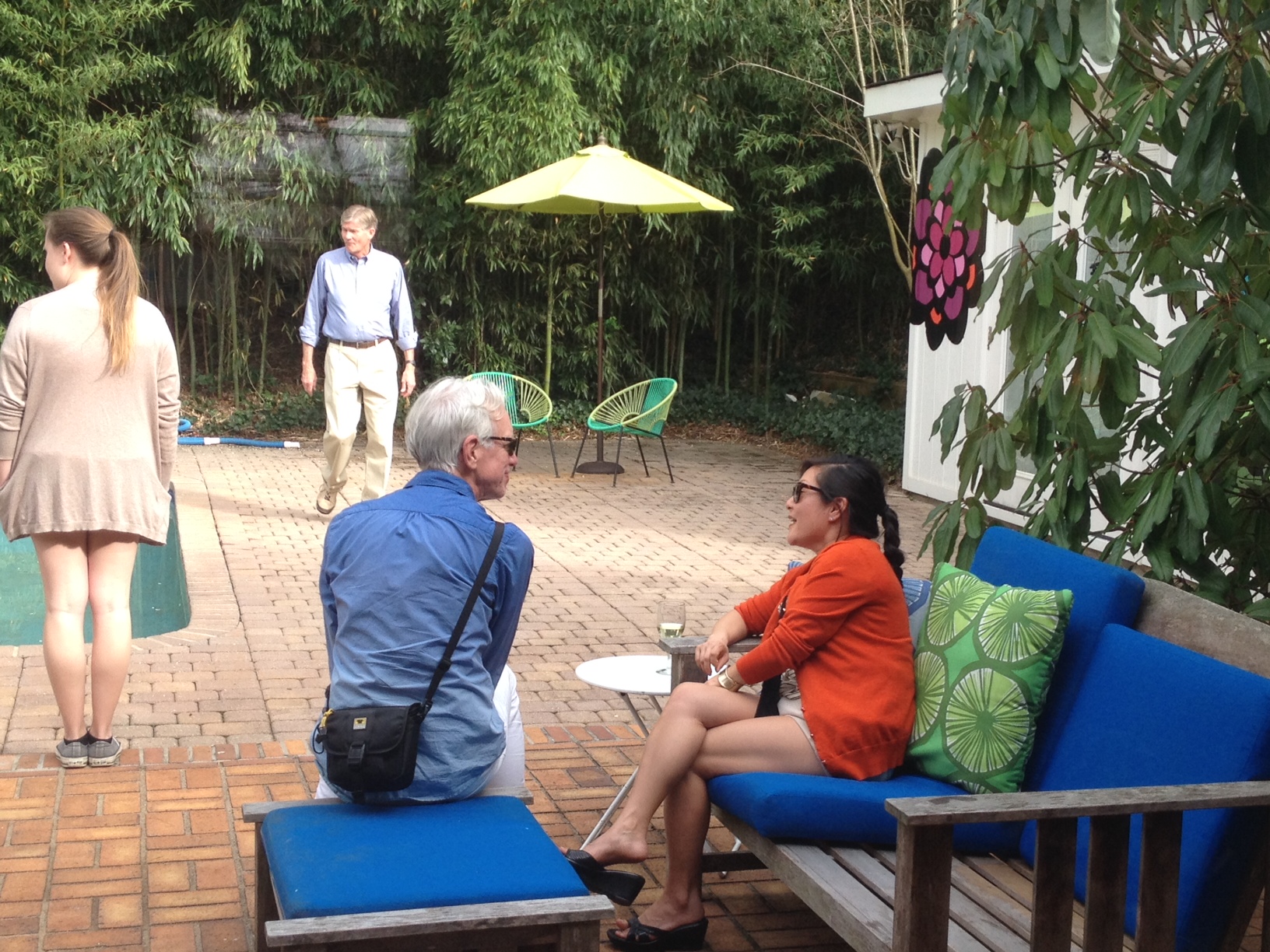